With the 607, B&W has crafted an affordable stereo speaker that's big on adaptability, musicality and entertainment, without sacrificing an element of control.

Bowers & Wilkins introduced its first 600 series of loudspeakers in 1990. It goes without saying there have been numerous overhauls and updates since then, but the 600 has always been the most affordable, and thus most accessible, series of speakers in the B&W range.

That’s true of the sixth, and current, 600 series. The B&W 607 is the smallest, most affordable and accessible passive stereo speaker B&W offers. So is it the first step on a path of a lifetime of B&W ownership?

Bowers & Wilkins has never been afraid of making a strong design statement, but the 607 is an unassuming box of unexceptional proportions. The price point dictates that although the B&W 607 is well made, there certainly hasn’t been a tearing up of the “loudspeaker design” rulebook here.

As we’ve come to expect from B&W, however, money has been spent in the right areas. For instance, that 13cm silver mid/bass driver is made of Continuum (a technology that trickles down from the super-expensive B&W 800 series) rather than the bright yellow Kevlar of 600-series past.

In addition, the 25mm tweeter above it is an aluminium double-dome unit that’s decoupled from the speaker baffle itself. Technology such as this isn’t the cheap option, nor is it straightforward to implement. 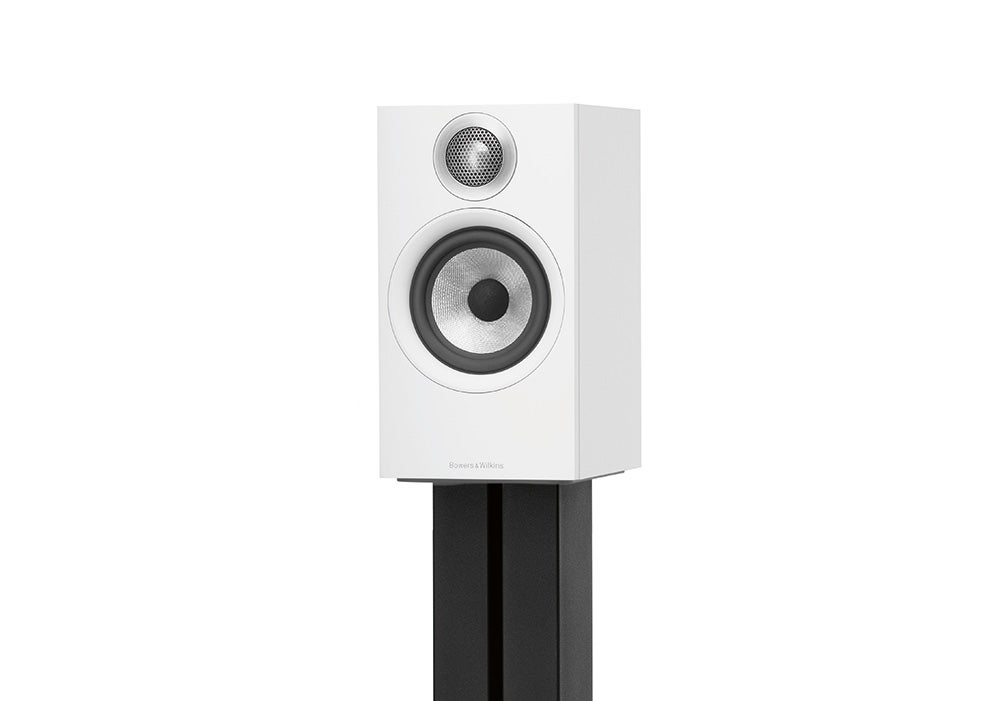 Aside from a discreet Bowers & Wilkins logo at the bottom of the panel, that’s it for the front of the 607. The grilles are held in place using magnets, so there are no recesses or protuberances spoiling the clean overall look. Around the back, the B&W 607 is fitted with bi-wire speaker binding posts that are positioned just below one of B&W’s familiar dimpled bass reflex ports.

The no-nonsense, no-frills design is reinforced by the colour options on offer: black (with a black grille) or white (with a grey grille). Sensitivity of 84dB and nominal impedance of 8ohms promises compatibility with a wide range of price appropriate amplifiers.

Like most loudspeakers, the B&W 607s benefit no end from a long running-in before any critical listening is done. From cold, the B&W 607s sound slightly low-key; once they have a few hours under their belts, they’re born entertainers.

“Entertaining” in a small and relatively affordable speaker is quite often a euphemism for “overconfident bass”. But that isn’t the case here – for all that the 607s are punchy, and carry well-controlled momentum, they’re a nicely balanced overall listen. 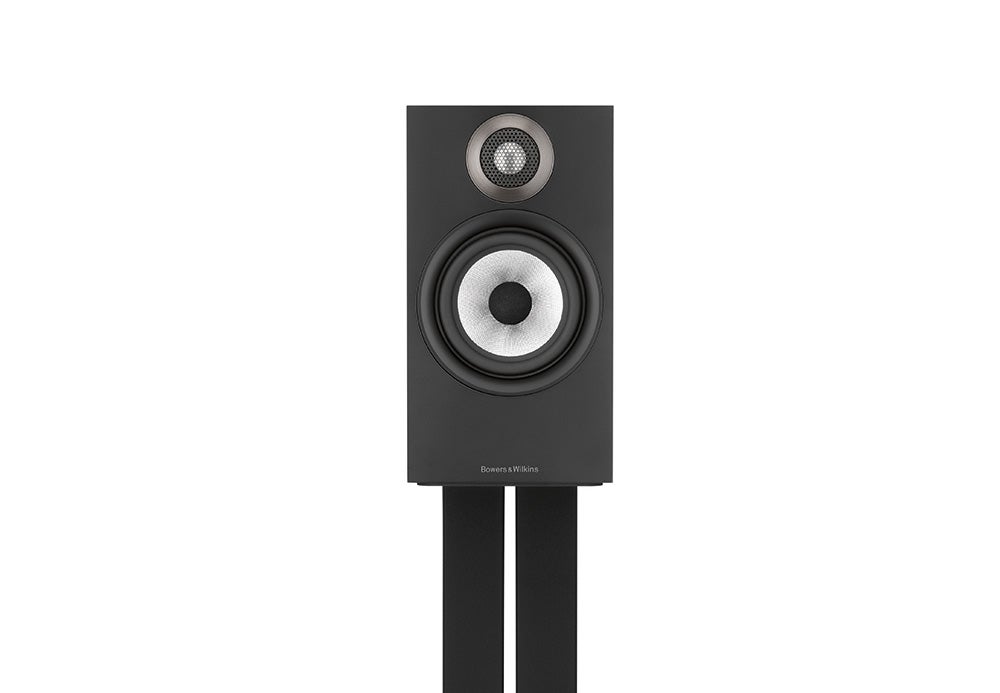 The latent treble in Mark Ronson’s Pieces of Us in dealt with confidently. The high-frequency action sounds crisp and taut, but there’s no suggestion of coarseness, even at volume. The opposite end of the same tune enjoys more substantial bass presence than the cabinet size and driver dimensions might suggest, and although it’s gratifyingly deep and rapid, it isn’t excitable.

There’s plenty of space in the mid-range for a singer to stretch out, and all the vocal character in Townes Van Zandt’s To Live is to Fly is transmitted in its entirety. Integration throughout the frequency range is smooth, and the 607s paint a convincingly unified picture. 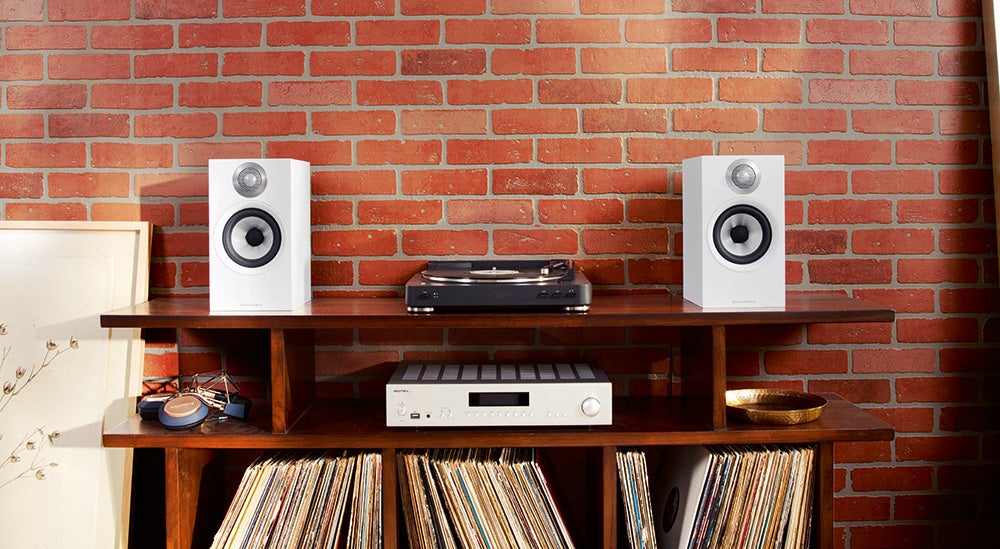 This helps the B&Ws’ impression of timing. It doesn’t matter if you’re listening to something as spare and straightforward as The Kinks’ You Really Got Me, or as busy and overworked as Solange’s Losing You – the 607s sound snappy and together in a way that’s almost instinctive.

And while they’re not the last word in dynamism, they can place significant distance between “low-key intensity” and “everyone playing louder than everyone else”. Their punchy impetus makes them an endlessly enjoyable listen, and it’s hard to imagine them being exposed, even by disproportionately expensive amplifiers.

In terms of adaptability, musicality and entertainment, the B&W 607s are an object lesson in how to enjoy yourself without getting out of control.

At £399 the 607s are the most affordable pair of speakers in B&W’s 600 series, and value they offer for their entertaining sound is excellent.

The bass response of the 607s is quite startling given the size of the cabinet, more than enough to give bassy tracks a sense of weight and punch.

Unlike some other speakers around this price, the B&W aren’t as dependent on the characteristics of the electronics driving them, making it easier to partner them with a range of amplifiers.

We genuinely can’t think of a reason not to buy the 607s. Unless, quite frankly you’re not interested in them.