The PuroPro headphones offer what you’d expect of a £200 pair of headphones, along with the more unique benefits of volume-limiting tech.

The PuroPro are a pair of hybrid ANC headphones from Puro Sound Labs. They’re not Puro’s first pair of cans by a long shot, which might make you wonder why you haven’t heard of this award-winning start-up until now.

Until recently, Puro primarily made colourful, volume-limited headphones for children. The family-run company was founded in response to owner Niki Russell’s Noise-Induced Hearing Loss diagnosis. According to Russell, one in five teens lose their hearing as a result of NIHL, making it an entirely preventable condition.

This is where Puro’s signature volume-limiting tech comes in. Supposedly able to offer studio-grade audio quality at reduced listening levels, Puro headphones offer a safer way to listen to music.

However, the risk of hearing loss doesn’t end at childhood, which is why I was interested to see Puro introduce headphones with adult ears in mind in the PuroPro.

The PuroPro aren’t as flashy as the child-marketed headphones in Puro’s line-up, sporting a more elegant, monochromatic design. Even the packaging feels premium, the headphones arriving in a protective hard case within a latched, wooden box. I don’t know what I’d do with the box once the headphones have been taken out, but it’s a nice touch, nonetheless.

The oval ear cups feature a soft, triangular design with no shiny logos or branding to distract the eye. The only mention of the company comes in the word ‘Puro’ subtly printed across the top of the headband. A twisting mechanism allows the cups to swivel 90 degrees to lay flat or curl in on themselves to be placed inside the hard case, while a sliding mechanism allows the wearer to adjust them the fit. 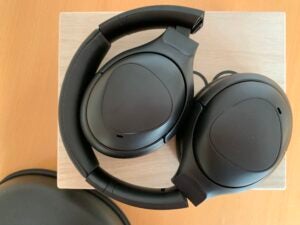 Both the headband and ear cups are padded and coated with soft protein leather. While the protein leather elevates the PuroPro design, the mostly plastic build does feel slightly cheaper than its price tag would have you think. Thankfully, the plastic frame does a good job of keeping the over-ears light and portable.

Features — Good for your ears

The most distinctive feature of the PuroPro is the volume-limiting tech. The volume will max out at either 85dB or 95dB depending on which setting you choose to protect your ears from.

85dB is the preset and the maximum safe sound listening level as recommended by many organisations including WHO and OSHA. At this level, you can safely listen to your tunes for up to eight hours. If you’re not happy with this limit, you can hold the volume up and down buttons simultaneously to turn it up to 95dB. While those 10dB do make a noticeable difference, Puro only recommends you use the 95dB setting for up to fifty minutes at a time. 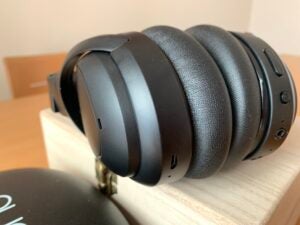 I mostly stuck to the 85dB setting during my time with the headphones, as I rarely listen to music for less than an hour at a time and I wanted to reap the benefits of the volume-limiting feature. While I could tell the headphones were more restrained than other pairs I’ve tested, the audio didn’t feel overly compromised, just a bit quieter. This could be due to the Puro Balanced Response Curve, which Puro uses to deliver audio from its 40mm drivers within the 85dB/95dB volume limits.

Of course, these headphones also have some more conventional features. The hybrid ANC uses four of the PuroPro’s five mics to block out ambient noise, with two levels to choose from depending on the amount of noise in your environment. Level one is the most effective and two is a medium between level one and no ANC at all. 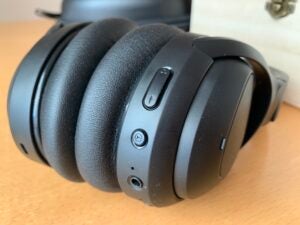 The ANC does a decent job of cancelling out distractions, but it could be stronger, and I struggled to see a distinct difference between level one and level two. The headphones take advantage of Bluetooth 5.0 for wireless connectivity and have a respectable 28-hour battery life with ANC and 32 hours of playtime without. Sadly, there is no quick charge feature, with battery taking two hours to reach full capacity.

The PuroPro headphones offer a restrained, but generally well-balanced sound. Secret by Nito is packed with detail in the high end. The headphones can carry a wide stereo image and conveying dynamism despite the subtle quality of the volume limit.

The drawbacks of this feature become slightly more apparent when listening to Lorde’s energetic Green Light. While the tonal balance is still good, the bass can get somewhat lost behind the powerful mid-range. 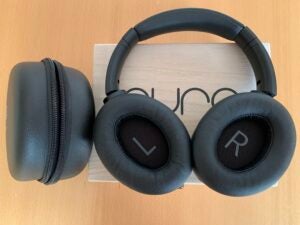 That isn’t to say the bass can’t hold its own in less demanding tracks – the lower end rightly steals the spotlight in The Weeknd’s more slow-paced The Hills. That said, these headphones can lack power at times, leaving the low end feeling somewhat thin. If you need your bass low and booming, you should seek options elsewhere.

Should you buy the PuroPro Hybrid ANC headphones?

The PuroPro Hybrid ANC headphones are a subtle pair of headphones in both design and sound – and that isn’t a bad thing. With its volume-limiting tech, Puro offers health benefits many audio brands have yet to consider, making it a standout option if Noise-Induced Hearing Loss is a concern. 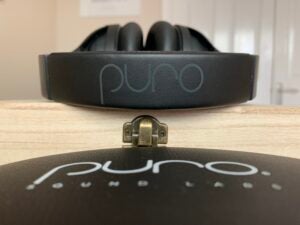 If you prefer your headphones loud and unapologetic, you might find something the PuroPro to be lacking in this department. Most listeners, however, will enjoy what the PuroPro have to offer, including good sound quality, a good 28-hour battery life and active noise cancellation.