Sadly for me, this reviewer is easily old enough to remember the 1980s; the garish hairstyles, the loud clothes, the money, money, money culture and all of the rest of it. Few mediums have done as much to fictionalise this much maligned decade in recent years than games – if you’re looking to push out a ‘retro’ release, the closest you’re allowed to come to the present day is the first 18 months of the 1990s at best.

Punch Club, as its pixel arts visuals and chip-tune soundtrack beautifully illustrate, is yet another mobile title determined to pay homage to the Hollywood impression of the 1980s from start to finish, packed full of references to the decade time seems determined not to forget and strung along by a plot that could have been lifted from any action movie of the time. Indeed, Punch Club is yet another flawless take of retro gaming goodness packaged up neatly for the App Store and Google Play. What it isn’t, however, is a game that takes much time to consider its surroundings on mobile. 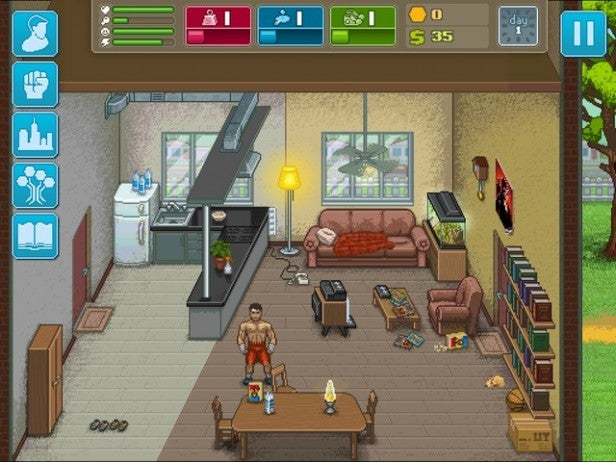 During my opening half hour or so on Punch Club, I found myself stuck in grocery store having paid for my supplies for the day – a frozen pizza and a soda the game informed me wasn’t especially good for me, if you’re interested – but unable to leave the menu screen that enabled me to do so. It was the gaming equivalent of me buying a few bits and bobs at my local Tesco Express and then spending the rest of the evening staring the shop attendant keenly in the eye, refusing to move away from the till – which, admittedly, is what I like to call “Thursday night”. As it turns out and completely unbeknownst to me, I’d broken Punch Club’s tutorial.

It may seem like a small point, but it’s actually the perfect illustration of why Punch Club is such an awkward fit on mobile. This is a game where stocking up on food and making sure you replenish your energy is as important as training in the gym or actually taking part in what’s billed as the meat in the game’s sandwich, the fights. Training up to be as good a fighter as your now departed father, Punch Club charges you with keeping your (largely shirtless) combatant happy, fed, and most importantly, in shape. 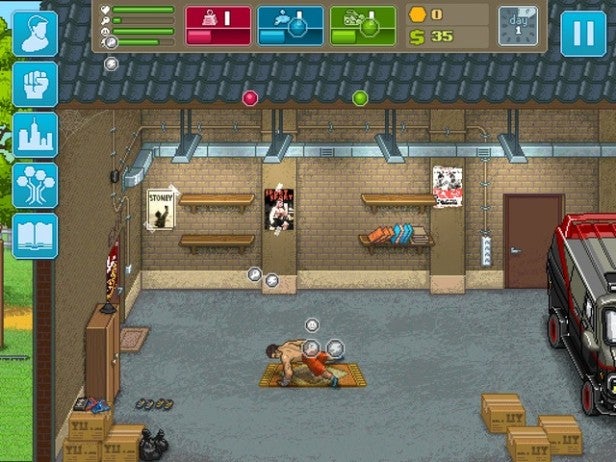 Days are limited time wise, so packing in enough action so you grow as a fighter is key here, whether that’s doing push ups on the mat in your garage to increase your strength or delivering pizza to earn cash in order to survive. Travelling around the city to do all such tasks is a case of travelling by foot, which uses up time, or paying a couple of dollars to take the bus – not always an option if money is in short supply.

Choosing the former, however, leaves you wide open to get mugged, which serves as one of the random encounters Punch Club likes to throw in your direction. Fights are actually entirely stat based affairs, with your only input being to pick fighting specialities before each round based on the skills of your opponent. That done, it’s simply a case of watching to see whose gauges run empty first, with early encounters by no means giving you an easy ride. In fact, before even leaving the game’s tutorial, I’d been mugged by a couple of guys you might expect to see frequenting a dark room in Soho before my now legendary grocery store incident. Bugs or no bugs, Punch Club gives very little reason for anyone but the most dedicated to carry on. 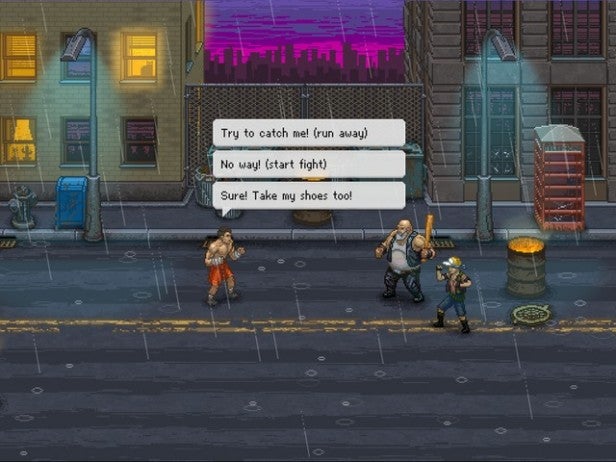 And this is the point where reviewing a mobile game differs from that of a game on any other platform. The pick up and put back down again nature of the majority of the most successful smartphone games is in no way a coincidence and has generally become accepted as the best way to honour the platform, even by retro-inspired titles. Punch Club makes no such allowances, however, instead offering up the exact same approach it adopted on Steam and charging you with playing by its rules.

This is why the bug I encountered is so fundamental. The reason why I ran into trouble in the grocery store? Because I’d dared to close the app down for a few hours in the middle of the opening tutorial. When I came back to, some kind of notification telling me what I needed to do simply didn’t pop up, and I unknowingly went rogue and dared to make my own way within the remits of the game. Doing so caused the whole thing to come crashing down. 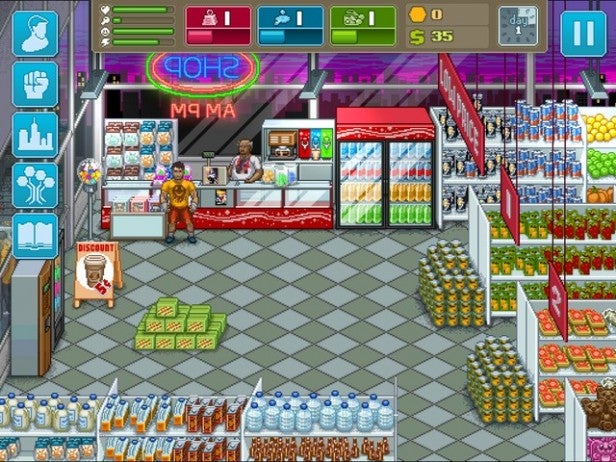 It all means that, if you’d like to take on what is essentially an RPG-cum-simulation on your phone rather than on the platform it was presumably designed for – that dusty old PC in the corner of your bedroom – then Punch Out is the brawler for you. Taking a step back and looking at it entirely subjectively, however, as a mobile prospect, Punch Club swings and misses almost as it does make contact. Playing on mobile just shouldn’t be this much of a fight.

Verdict
Punch Club neatly brings together simulation and management in a tight little package that taps into every 1980s cliché you can think of, and it does it with much love, but it fails to take mobile into account, serving up a 2D adventure that never really gels with its host platform.