Available on PC, Mac, Linux, Ouya and iOS (tested)
There’s a little unspoken of hurdle that almost every new game has to overcome when it first lands in your hands. Unless it’s a sequel or a clone, or is so derivative that it has no discernible traits of its own, there are large parts of the game you simply won’t know how to play.

It’s an art. They guide you in with the rules of the game and then, as the stages progress, they slowly start to build on them, adding new elements to test you without dropping you into a labyrinth without any clue as to how to navigate your way out. Apart from Potatoman Seeks the Troof, that is. Here, the game teaches you the rules, and then tosses those rules out of the window before bursting into hysterical laughter as you fluff and flounder. 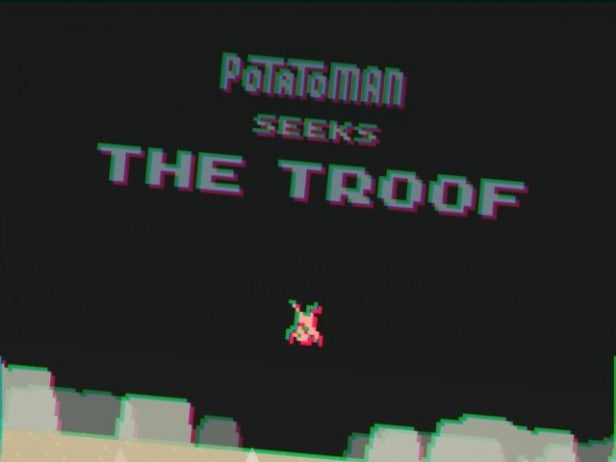 Potatoman Seeks the Troof gets away with this – or, at least, attempts to – by casing its deathly take on the platformer in some especially retro wrapping. Potatoman is, himself, an especially blocky looking chap, and the world he inhabits could easily exist within a page of Teletext. Controls are reduced to just jumping or running left or right, with the actual platforming elements of play revolving around avoiding the scores of obstacles in your path. Or dropped from the sky. Or bounding about in front of you.

Truth is, you can never really tell just what each object you encounter is going to do. Case in point, the first regular demon standing in front of your path – a humble cactus – initially stands inanimate, as a cactus might. Very soon, however, the cacti start to grow as you leap over them. The next one jumps in tandem with you, almost certainly taking your life in the process during the first run through. Later on, a whole run of cacti too many in number to leap over clear a path for you, jumping into the sky in tandem. Apart from the last one, who stands as a lone soldier as one final trick. 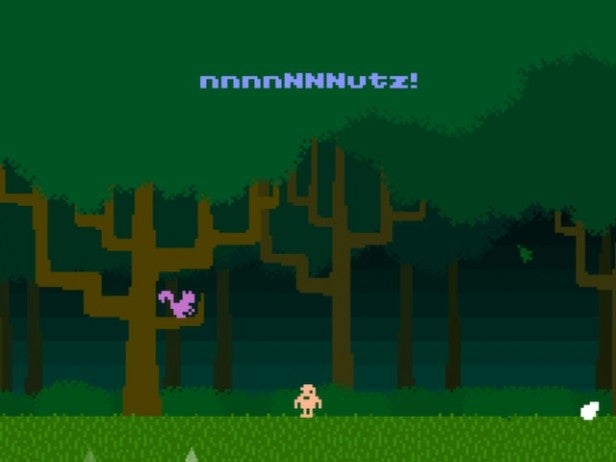 And this is a model Potato Seeks the Truth follows throughout. Just when you think you’ve got a handle on how a particular element will react to your presence, the game performs a complete switch entirely unannounced, usually resulting in your demise. It quickly becomes depressing to know that there’s no chance whatsoever you’ll make it through a stage without dying several times, and even more sapping when you realise it isn’t due to a well crafted level, but rather the game simply not playing fair.

On top of this are some fairly awful controls. Though you can alter just how much of the screen they take up – running left and right handled on the left hand side of the screen, jumping on the right – it’s all too easy to lose your place and run in the wrong direction leading to tragic circumstances. So, when Potato Seeks the Truth isn’t making you feel like the worse gamer ever, it’s saddling you with some of the most shambolic controls to ever grace a touchscreen. 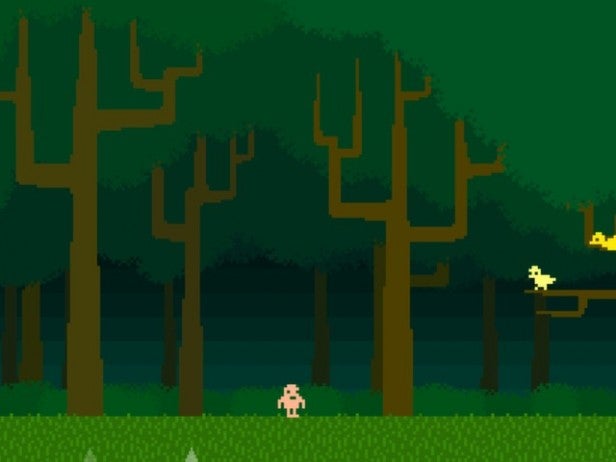 It almost feels like some kind of practical joke. The ‘troof’ the game refers to – alluded to by the Potatoman’s cast of animal characters as you progress – is itself something of a misnomer, dropped in to raise a smile as the script drops pun after pun in your direction. But that isn’t enough to save Potatoman Seeks the Troof from feeling like a half hearted vanity project for the development team behind it, produced solely to make those behind it feel clever and everyone else feel rather stupid. And that’s the troof.

Verdict
Sometimes ripping up the rule book is not a good thing, and Potatoman Seeks the Troof’s constant game of bait and switch ruins any chance it has of being fun, with endless deaths at the hands of a shifting design system draining play of all credibility and creativity.