The Poco F3 is an excellent phone by most standards, which makes it even better considering its modest price tag. The screen is a gem, offering specs rarely seen even at double the price, and the processor is not only powerful enough to tackle almost any task, but it also packs 5G connectivity, making it that bit more future-proof.

The Poco F3 demands your attention if you’re looking for the best screen and processor you can get for a modest sum of money.
With the quality of the best cheap phones and the best mid-range phones improving all the time, it can often be hard for devices at this end of the market to stand out. Thankfully the Poco F3 manages to outperform its price tag in a number of ways.

The glass rear panel of this phone is as reflective as a mirror, and it’s quite stunning when taken out of the box for the first time.

Of course, with such a glossy sheen it is especially prone to picking up unsightly fingerprint marks after a bit of use. You can suit it up in the included clear plastic case to avoid this problem, but that detracts from the eye-catching gleam. 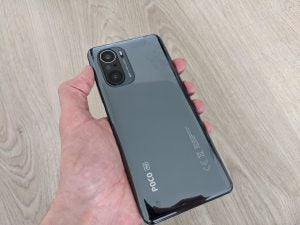 In more practical terms, the device is large and so may be difficult to manage if you prefer phones that can be used with one hand – but if not then you’ll enjoy the big-screen experience because the display is something remarkable.

Unfortunately, it hasn’t got an IP rating and audiophiles will be disappointed by the lack of a 3.5mm headphone jack. Yes, there is an adapter supplied in the box, but it’s one of those fiddly little things that’s all too easy to mislay.

The screen is one of the standout features of this device. Not only does it have an AMOLED panel, measuring in at a healthy 6.67-inches with a Full HD+ resolution (that’s 2400x1080p), but it also offers a 120Hz refresh rate, HDR10+ support, 900 nits typical brightness, and a 360Hz touch sampling rate. 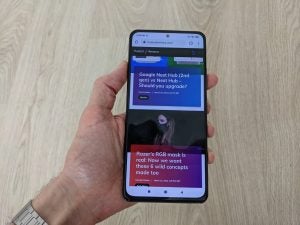 If you find that stunning spec sheet to be undecipherable, then just booting it up for the first time will leave a lasting impression.

The display is sharp, scrolling is super smooth, and the contrast is excellent, with vibrant and punchy colours that almost pop out of the surface next to the deeper blacks that only AMOLED screens can provide.

All-in-all during my time with the Poco F3, I found the display touches flagship-level performance; you’d usually have to spend twice as much money to get one this good.

Fortunately for bargain buyers, the display is not the only specification that can hold its own among the very best smartphones. This device boasts a Snapdragon 870 chipset, which is near the top of the tree when it comes to Qualcomm’s smartphone silicone, and the processor certainly makes its presence felt.

Everyday tasks are completed easily, with no signs of lag, slowdown, or crashes. When switching between apps or running animations there are no hold-ups, and you can multi-task between apps very comfortably (even the base model has 6GB of RAM)

If the 120Hz refresh rate and 360Hz touch sampling rate have halfway convinced gamers to buy this device then the chipset should fully win them over, as I found it can run demanding games with no problems at all. 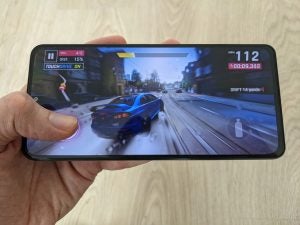 Moreover, the 5G modem means that it can access the very latest mobile data standard, not only giving you superfast internet when you’re away from the Wi-Fi, but also giving you peace of mind that it should last you for some years to come without falling too far behind newer models.

As for the software, the MiUI 12 interface isn’t my favourite skin for Android. Not only are lots of apps pre-installed, clogging up space unnecessarily, it also pops up with adverts every now and then, which are irritating and only excusable as a compromise that’s knocked down the price by a few pounds.

The Poco F3 has a fairly large battery by any standards and 4520mAh is nothing to sniff at, it’s a healthy capacity for most smartphones. However, given how demanding the screen is, I noticed the juice can get sucked up quite quickly.

If you’ve got the screen on its highest settings and you’re watching HDR video, or playing an intensive game, then that battery percentage soon ticks down, and that’s not a surprise with such a bright and responsive screen.

You won’t get through much more than a day’s heavy usage, but that will suit most people fine as you would generally plug in your phone to charge at the end of a long day.

I’d advise you to use the default 60Hz option most of the time, and only change it to 120Hz when you’re undertaking an activity that would really benefit from the enhanced refresh rate.

The camera module is led by a 48-megapixel main sensor, an 8-megapixel ultrawide, and a 5-megapixel telemacro lens. Generally, I found images from the main sensor to be bright and punchy, with decent though not brilliant levels of detail. 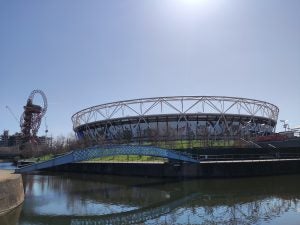 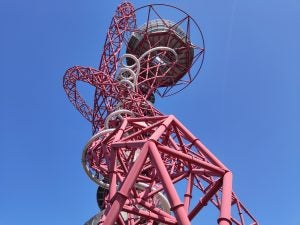 Thanks to the camera’s Night Mode option, images taken in low-light conditions do reduce glare and noise quite significantly (though not perfectly), and more colour is restored. 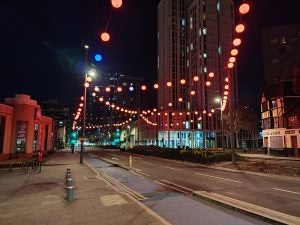 The ultra wide camera was a noticeable step down in detail compared to the main snapper. It’s still good to have the option for capturing larger landscapes, but it’s not on the same level as the others. 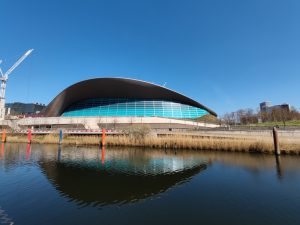 Generally I don’t use a macro lens all that often, though the one found on this device is perfectly serviceable, as can be seen in the photo below. 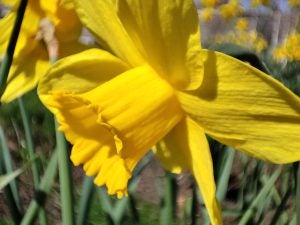 However, note that while the screen and processor are truly exceptional for the price, the same isn’t true of the camera. If that’s your very top priority, it would be worth considering alternatives in the same price bracket, such as the Google Pixel 4a which can compete with the best camera phones around.

The Poco F3 is an excellent phone by most standards and it is made even better by the low price tag.

The screen is a gem, offering specs rarely seen even at double the price, and the processor is not only powerful enough to tackle almost any task, but it also packs 5G connectivity, making it that bit more future-proof.

While there are a couple of minor disappointments – the camera is acceptable but not awesome, and the software is a bit clunky – these don’t take away from the fact that the Poco F3 is one of the best lower mid-range phones around.

You should buy the Poco F3 if…

If you enjoy playing games or watching videos on your phone, then a great screen like this one only enhances the experience

5G arrived a couple of years ago and is present now on most flagship handsets. But if you want faster mobile data speeds without having to pay over the odds, this is a good starter.

This phone has got an excellent processor that can truly hold its own. If you are a power user, or simply want peace of mind that your smartphone will cope with demanding apps a year or two down the line, this is a good choice.

You shouldn’t buy the Poco F3 if…

The camera here is serviceable, but it’s not flagship-rivalling as some of the other specs are. If you mainly use your phone as a camera, you should consider alternative options.

Unfortunately, there’s no IP rating for this phone, and it lacks a 3.5mm headphone jack. If either of those things, on top of the overloaded and advert-supporting software annoy you, then you might want to find something more practical.