After all the excitement of its superb feature list, we were fully expecting the SBX-N700 to back it up with some spectacular movie sonics – but sadly that wasn’t the case. Not at first anyway.

While the Pioneer does a good job at boosting the overall volume, depth and dynamism of movie and TV audio, it’s spoiled by a subwoofer that makes everything sound too warm and muffled for our liking.

For instance, as Ian Holm narrates the opening scenes of The Hobbit, the stuffy bass inhibits vocal clarity and makes the soundstage feel closed in. And once Smaug starts attacking the village of Dale, the carnage is too muddy and leaden-footed to really get the pulse racing.

The boomy bass pulls you out of the moment, not least because you have to keep fiddling with the subwoofer volume controls. We pulled the level all the way down to its lowest setting (-10) but still found it too intrusive, and none of the EQ modes could help either.      The good news, however, is that it’s easily rectified – simply turn off the wireless subwoofer and switch to the built-in bass drivers. They deliver a punchy, well-controlled sound without overpowering the other speakers. 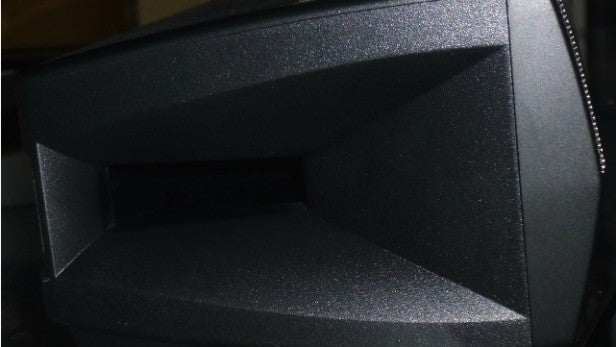 Naturally it lacks the slam and authority you’d get from a good-quality sub, but it’s worth the sacrifice for a more satisfying, natural sound.

Once we’d made the switch, the soundstage opened up and we began to marvel at the Pioneer’s vigorous mids and cleaner, sharper dialogue. Individual effects were given more room to breathe and the N700’s terrific detail reproduction came to the fore. When Bilbo and the dwarves attempt to rescue the ponies from the Trolls, for instance, the rustling bushes and trees are crisply rendered and the Trolls’ grunts and snorts are disgustingly clear.

The integrated subs also cope admirably as the CG beasts start stomping around trying to catch the dwarves, with quick, taut bursts of bass successfully conveying their heft. They also bring syrupy richness to Howard Shore’s epic score, providing levels of depth and drive you simply don’t get from TV speakers.

Of course, switching off the sub does throw into question the need to invest in the SBX-N700 at all – you could save yourself £100 and opt for the SBX-N500, which is practically the same soundbar, but without the separate subwoofer.

The Surround mode does a decent job, throwing open the soundstage open a little wider, but it’s subtle. There are audible differences between the Gaming, Movie and Music modes, with Movie perhaps offering the best overall frequency blend, but it’s really a matter of taste.

The SBX-N700 makes a decent Bluetooth music player, again provided you shun the wireless sub, which makes kick drums and basslines sound boomy and ill-defined. The soundbar’s own drivers are subtler, tighter and more cohesive, backed up by crisp percussion and clean vocals.

Should I buy the Pioneer SBX-N700?

Our disappointment at the performance of the SBX-N700’s wireless sub makes it hard to justify paying the £100 premium for it. The soundbar’s built-in subs do a smashing job on their own, adding depth and weight without detracting from the sterling work of the other drivers.

The sound is big, dramatic and cohesive – exactly what you want when stepping up from TV speakers – but the wireless sub’s ponderous, boomy performance does nothing to enhance the experience.

With this in mind, it’s probably worth investigating the SBX-N500 instead (review coming soon), which is less powerful but jettisons the subwoofer for a £100 saving, or rival soundbars like the LG NB4530A or Sony HT-ST3.

Away from the subwoofer, however, and the SBX-N700 is a terrific soundbar, particularly when it comes to features. With Wi-Fi, DLNA, Bluetooth, USB media playback, Miracast and YouTube it’s bursting with technology, much more than you’d normally expect from a soundbar. It’s also well-made and easy to use, although HDMI inputs would have made life easier. This is why it’s still worth considering despite its iffy sub.

An impressive, feature-packed network soundbar that only sounds great without the sub, which makes the £100 premium hard to swallow – the SBX-N500 could be a better bet.