It’s a 2.1-channel soundbar designed to offer powerful home cinema sound without cluttering up your living room. The LG NB4530A is notable for its remarkably slim design, but it also comes with a wireless subwoofer and a host of other features. It’s no wonder these things are flying off the shelves right now – they’re convenient, stylish and can produce sound quality every bit as good as a full-size system, apart from the lack of true surround channels of course.

LG NB4530A soundbar not for you? Check out our round up of the best soundbars to buy

The NB4530A has to be one of the slimmest and most discreet soundbars we’ve ever tested. It’s just 35mm high and 75mm deep, so when wall-mounted below your TV it won’t draw attention away from the screen.

All you can see running along the front of the bar is a black mesh, which is broken up only by the large LED panel shining through it. This displays the name of the selected input, volume levels and other key info. Along the top is a row of touch sensitive controls.

Also impressive is the soundbar’s build quality. It shuns the cheap plasticky materials of some rivals and opts for a premium brushed aluminium back end and a metal front mesh. This excellent build quality makes it satisfyingly heavy and gives the impression of a classy, well-made product. 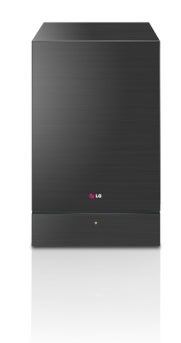 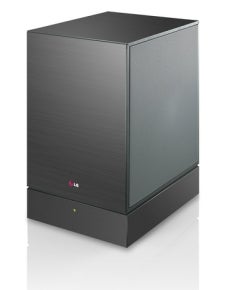 As mentioned the soundbar can be mounted on the wall – LG supplies a bracket and mounting template in the box. But it can also be placed on a flat surface if you attach the cover foot to the bottom, which lifts it 19mm off the surface.

The active subwoofer is an equally classy piece of kit, boasting robust build quality. It’s short, compact and features an attractive brushed black finish. The right-hand side conceals the bass driver behind a silver mesh. It’s wireless, so you can place it anywhere you like without messy cables getting in the way. It pairs with the soundbar automatically, with a small LED on the front indicating that it has connected.

On the back of the soundbar, LG has crammed in more sockets than you might imagine given its slender frame. The HDMI output and single input let you pass a 3D-capable source through the soundbar (even when it’s in standby), plus the output is Audio Return Channel (ARC) compatible, which means it’ll accept an audio signal from a compatible TV – saving you the trouble of connecting a separate digital audio cable.

They’re joined by an optical digital audio input, a 3.5mm minijack input for portable audio devices and a USB port that lets you play MP3 and WMA files from flash drives and external hard-disks.

LG has packed the NB4530A full of useful features, chief among which (for music lovers anyway) is built-in Bluetooth. This makes it a breeze to stream music from phones, laptops and other compatible devices. It’s extremely easy to use – simply toggle to ‘BT’ mode, find the LG on your device and you’re ready. Moreover, as it’s Bluetooth, it’s compatible with more or less any phone, not limited to just one make or model.

Bluetooth connectivity is also at the heart of LG’s Wireless Sound Sync feature, which makes it possible to beam sound from one of LG’s 2013 TVs to the soundbar, as well as controlling the NB4530A’s volume with the TV’s remote. Sound Sync is also available when you connect your TV to the soundbar’s optical digital input.

3D Sound refers to 3D Sound Processor, which aims to expand the soundfield and make sound ‘more immersive and cinema-like’. The on-board amplifier musters a quoted 310W of power (2 x 80W plus 150W from the sub). On-board decoding is limited to Dolby Digital and DTS, but HD audio fans fret ye not – it’ll also accept decoded LPCM from a Blu-ray player via HDMI.