The Series 9000 is Philips’ top-of-the-range rotary shaver, with a pivoting tri-blade head and the option to use it wet or dry. It’s available with the SmartClean cleaning station (S9031/26) or without (S9041/12). We tested the latter, which is £40 cheaper.

It offers a close shave, is kind to sensitive skin and is mostly a pleasure to use.

There’s something rather classy about the Philips Series 9000. The trio of circular blades looks somehow more advanced than the straight foil type, despite Philips having been making its tri-blade Philishave models since 1956. There’s something a little War of the Worlds about them.

The blades all individually pivot towards and away from the centre of the head, while the head itself unipivots. 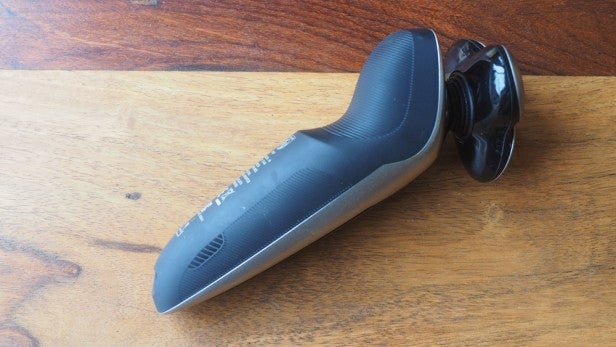 The ergonomics are also such that the Series 9000 fits your hand instantly, and feels almost weightless – it’s just 160g. That’s not to say that this electric shaver feels cheap or flimsy, as its slimness means it still feels dense.

Sadly the price of those superb ergonomics is that the trimmer isn’t integrated – it’s a separate head that’s attached simply by pulling off the shaving head and clicking in the trimmer. Easy enough, but if you’re someone who regularly uses a trimmer, you could get annoyed at having to hunt around for the separate attachment. 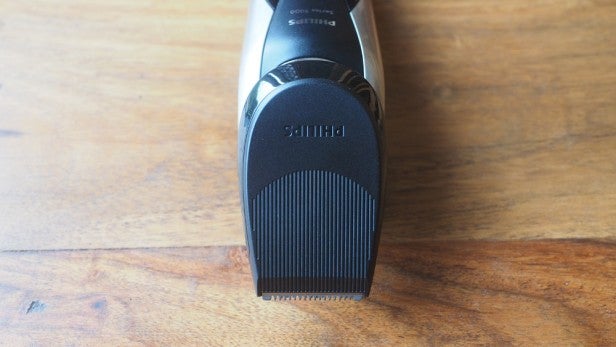 While we’re on the downsides, there’s also no charging stand supplied – unless you pay the extra for the cleaning station, of course – and to compound the problem there’s no head guard supplied. You’ll just have to be careful. It does come with a rather nice semi-solid travel case, at least.

A very simple display is hidden behind the glossy black plastic below the power button, with three simple lines to indicate the battery level, and a tap icon to suggest that you clean the head.

The first thing that strikes you when you switch the Series 9000 on is the lack of noise. It’s so quiet that I thought an internal gear might have stripped. But no, it really is that quiet. It’s such a pleasant change from the usual angry-bee shaver mob.

As these rotary shavers benefit from a circular shaving motion, it’s difficult to judge the Series 9000 on a single pass. However, it required minimal time and effort to achieve a very close shave, and was particularly good at hugging the more difficult areas of the lower neck.

It didn’t provide quite the super-close shave of the Panasonic ES-LV95, especially just under the nose, which is tough to get to with a rotary shaver. But it was still very close, and was kinder to sensitive skin than the Panasonic. It also requires less of a traditional shaving technique – you don’t really need to know which direction your beard’s growing; you just make circular motions around your face and let the blades do the rest of the work.

This is a wet-and-dry model – in other words it’s waterproof – so you can choose to shave in the shower or with shaving gel on. I found it most effective dry, though, and less likely to gunk up the blades. 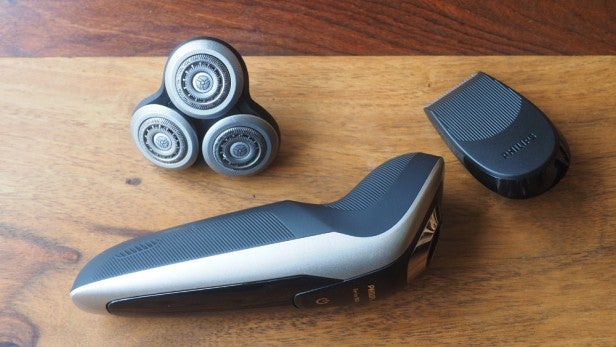 Cleaning the head is a simple matter of running it under a tap for a few minutes. Be warned, though, that if you leave this – or any rotary shaver, for that matter – unwashed for more than a few days, they become a sod to clean out. It’s easy enough to pop the front off the head and get the blades out, but those circular blades are more fiddly to get a brush into than their linear counterparts.

One battery charge lasts for around 50 mins of shaving, and a full recharge only takes an hour, which is all par for the course.

Should I buy the Philips Series 9000?

If you like minimal fuss and a quiet life, this is probably the electric shaver for you. It’s much quieter than most, requires little technique, and shaves very well. Paying the extra £40 for the SmartClean cleaning station would mean even less effort, and provide a stand as well.

However, if you regularly use a trimmer, swapping heads does introduce an element of fuss. And then there’s the fact that the Panasonic ES-LV95 offers a closer shave, built-in trimmer and a more useful display for around the same money.

The Philips Series 9000 is wonderfully quiet, light and effortless, while also achieving a very close shave.