The Philips HTL5120 is supplied with a large oval-shaped remote, which is better than the fiddly credit card style zappers you usually get with a soundbar. It sits ergonomically in the hand and features a straightforward, spacious button layout with clear labelling. There are dedicated controls for bass, treble and audio sync, and a direction pad at the top provides quick access to inputs.

The only operational qualm is the lack of display panel. From a distance it’s difficult to tell which modes are selected as the writing is so small. Similarly setting the bass, treble and lip sync are all done by ear, and the way the sound cuts out every time you press the or – key feels a little clumsy.

With rubber pads on the bottom, the unit is ready to plonk on a tabletop without having to attach any parts. When laid on a surface, the cables all emerge from the back of the soundbar through a gap. And for wall mounting, all the brackets you need are found in the box. It looks like a simple DIY job, although we didn’t test that out for obvious reasons.

So far so good, but sound quality is where the Philips HTL5120 really excels. Playing The Hobbit: An Unexpected Journey on Blu-ray, the first thing that jumps out is the warmth and refinement of its sound, which goes beyond what rival soundbars achieve at this price. 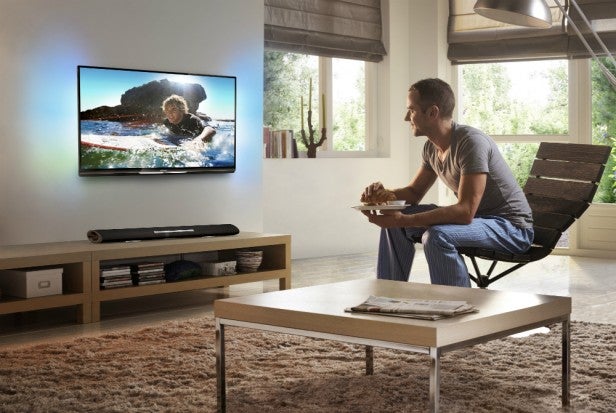 During the opening scenes telling the story of Smaug, the score has a wonderfully velvety quality as the action plays out. When the dragon attacks, the chaos comes forth with energy and attack, yet there’s not a single trace of harshness as buildings crash and trees are ripped up. Everything is conveyed with control and poise.

Meanwhile the built-in subwoofer does a fantastic job. It bolsters the sound with tightly layered bass notes and brings palpable depth to the movie’s spectacular action scenes. Troll footsteps have a hearty thump; the Stone Giants battle is a brutal affair but never overpowering; while the dwarfs’ sombre sing-song at Bilbo’s house has a deep, chocolatey feel.

Crisp high-frequency reproduction lends an unmistakable air of finesse. The Philips HTL5120 draws out fine sonic detail like the rustle of leaves under Radagast’s feet and the nuances of dialogue, which is clear and open. Mids and highs don’t have the thin, unnatural feel that you get from some soundbars, which doesn’t change a great deal when you turn the volume up high. Great stuff.

The only weak link is the impotent Virtual Surround Mode, which doesn’t really do what it says on the tin. It does, however, open up the stereo soundstage nicely.

The Philips HTL5120 is an impressively musical performer. There’s lots of detail in the sound, while understated bass adds warmth without swamping the other elements. It’s an admirably smooth and easy listen, but with fast paced tunes and it kicks into life with lively, precise rhythmic ability.

The Philips HTL5120 is up against some stiff competition in the soundbar sector but stands head and shoulders above similarly-priced rivals thanks largely to its superb sound quality. It demonstrates scale, refinement and low-frequency composure beyond its price tag, making for a hugely satisfying listen. Throw in superb build quality, gorgeous looks, built-in Bluetooth and plentiful connections, and the HTL5120 cements its place as one of the best soundbars in its class.