Imitation, it is said, is the sincerest form of flattery. That’s a nice way of putting it – in other quarters, copying someone else’s ideas is referred to less flatteringly as plagiarism, a rip-off, a counterfeit or a fake. Nonetheless, it appears there’s no shame in technology product development circles: when someone comes up with a good idea, someone, somewhere always tries producing their own version of it.


Take Philips’ latest pocket shuffle-style MP3 player, the GoGear SA2840. Instead of using the tried and tested five-way d-pad approach to the controls, it uses a system very similar to the iRiver Lplayer I reviewed only just last week. This involves the screen itself becoming a four-way rocker switch. You click the right and left edges of the player to skip back and forth through tracks, and the top and bottom edges of the screen to navigate up and down through lists of tracks and options. 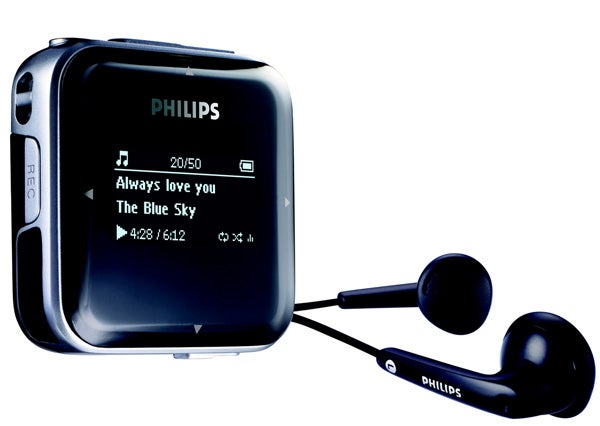 As with the iRiver, this is a good idea for a number of reasons. The first is that it’s a very easy system to get used to – once you’ve cottoned on to the idea that you can press the screen to control the player, there’s no looking back. The system employed here isn’t quite as elegant and intuitive as the one on the Lplayer, however – there are more additional buttons around the edges of the player – not just volume, on/off and hold, but also dedicated play/pause, back and record buttons as well.


This means you have to think before you click a bit more than you do with iRiver’s system, and the system proves much more awkward to use too. It’s fine while navigating lists or skipping tracks, but as soon as you want to do anything else – change volume, browse the music library or change settings – you have to move your fingers around to the buttons littering the edges. And that’s not ideal.


The second reason that the clickable screen is such a fine concept is that it allows the manufacturer to make the most of the space available, and on a small player such as the GoGear SA2840 that’s a crucial factor. It should allow the screen to occupy most of the front face of the player keeping it legible yet the rest of the device small. Alas, the SA2840 manages to bypass this singular benefit.

Though a small device from the front at 41 x 41mm, the SA2840 feels chunkier in the hand than its rivals; SanDisk’s Sansa Clip, Creative’s Zen Stone Plus or Apple’s iPod Shuffle (especially when you remove the Sansa’s clip attachment). There’s also no built-in clip attachment for using while exercising, though you do get a neck strap thrown in. And though it looks as if it stretches right out to the edges, the screen actually occupies a very small space in the middle of the player’s square frontage – it’s just four lines long – a similar size in terms of screen real estate to the Clip’s. Its monochrome colour scheme isn’t as legible as the Clip’s either. 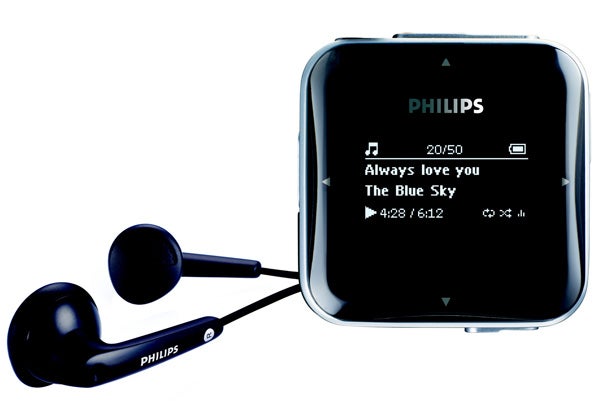 Elsewhere it’s a similar story. The Philips supports the bare minimum of file formats – just MP3, WMA, protected WMA and WAV – the Clip supports these plus Audible too. It doesn’t have an FM tuner either, though there are other models in the range that do. It looks quite nice, though – with its rounded front and corners making it look a bit like a tiny, shiny pinchushion. Battery life isn’t bad either, at a claimed 20 hours compared to the Clip’s 15, and it has a built-in microphone for voice recordings.


Sound quality, more importantly, isn’t bad at all. I hooked up my reference Grado SR325 cans to it and, on a first brief listen, there appeared to be nothing at all wrong. I loved the Clip because it offered decent quality for packed lunch pocket money, and it looked as if this player was going to be just as good.


A longer listening session confirmed these initial impressions. Firing up Depeche Mode’s brilliant ”Violator” album and playing ”It’s No Good” results in a finely detailed sound with a solid, if not astonishing bassline. It’s clear without being tiring and the top end never got too splashy or scratchy.

Moving on, I kicked off one of my favourite test tracks – Mozart’s ”Requiem” – and here I was a little underwhelmed. The biggest problem appeared to be a lack of dynamics. The maximum volume never seemed to quite be enough to deliver the crescendos with enough power and passion while dealing with the quiet bits with enough substance. I tried some more sensitive headphones – Sennheiser’s CX95 – and it was a similar story; the music just fell a little flat. 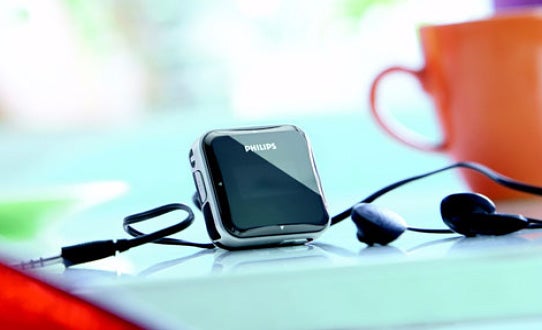 This, however, is a small complaint. And with other, less demanding music, the SA2840 acquitted itself well. Muse’s ”Sing for Absolution” was delivered with plenty of life, detail, punch and body. A touch of Metallica revealed no problem with complex heavy metal either, though again I was left feeling I wanted a touch more volume out of the player.


Despite the small niggles, then, it’s clear that the GoGear SA2840 is a highly capable player. Though the control system and screen could be better, sound quality is good and the design is quite good.


Best of all, however, it’s very cheap – at least in its 4GB guise anyway (oddly, the 2GB version comes out at roughly the same price). At £35 it’s less than a Clip with the same capacity, and undercuts the iPod Shuffle with half the capacity, as well as the 4GB Zen Stone Plus. That, in my book, makes this player a great buy and the best alternative to SanDisk’s tiniest player if you want more capacity.