The 55PUS7101 is a 55-inch TV with a native 4K resolution. Following a firmware update in the coming weeks, it will also be able to play high dynamic range images, while its smart features come courtesy of Google’s content-rich Android TV platform. In addition, its design is dominated by a bold, three-sided version of Philips Ambilight system. Its £1,200 price makes it look potentially good value too. But appearances can be deceiving and serious shortcomings with picture quality hamper the TV’s overall appeal.

The 55PUS7101 is the proud recipient of a 2016 iF Design award, and you can see why. Its trim silvery frame feels well built and looks attractive in a desirably industrial kind of way. Its table-top feet with their posh sand-blasted finish sit sleekly in each bottom corner of the unit, giving the design an airy design that appears almost like it’s floating.

Switch on the TV and the drama of the design shifts up a number of gears, thanks to a three-sided version of Philips’ Ambilight technology.

For those not familiar with Ambilight, it’s a technology where LEDs arranged around the TV’s rear edges output coloured light to match – with striking accuracy – the colour content of the video you’re watching. You can also set the light system to a single colour if you prefer, as well as adjusting the feature’s intensity and the aggressiveness with which it responds to changes in the image content.

On paper it sounds gimmicky to say the least. In reality, though, not only is it a fun feature but one that can actually enhance your viewing experience – at least if set up to run in a relatively gentle way.

On the surface, the 55PUS7101 appears to be fairly well connected with its four HDMIs, three USBs and both wired and wireless network connections. However, while two of the HDMIs are claimed to support the HDCP 2.2 4K anti-piracy system, I was unable to get either the Panasonic UB900 or Samsung K8500 Ultra HD Blu-ray players to play into the TV. I received no picture at all from the Samsung, and was unable to achieve anything but Full HD from the Panasonic.

Raising this issue with Philips, it appears that a firmware update soon to be released should fix the issue. Nevertheless, it’s a touch alarming that Philips is still having to tinker about with such stuff when other brands of TV – including some 2015 models – cope just fine with the first Ultra HD players.

My test screen also refused to support HDR playback. Apparently, HDR support is being added by a firmware update in the near future – which again is a concern given that all the other big brands have had HDR ready to go from the launch of their 2016 ranges.

To be fair, it is now commonplace for TVs to receive firmware updates through their working lives. But the magnitude of the features Philips is having to add so late in the day is striking – and, frankly, also raised a question as to whether I could sensibly review the 55PUS7101 with so many key features still missing.

As soon as I looked at the 55PUS7101’s pictures in action, however, I felt pretty comfortable to proceed.

Smart features on the 55PUS7101 are built around Android TV. From a content quantity point of view, this is a good thing, since it brings hundreds of apps to a Philips smart TV table that has historically looked rather bare. However, I’m not a fan of the cluttered and dictatorial Android TV interface, and even question the abundance of apps when few of those will be of precious little use to most TV users.

While there are plenty of useless apps, a number of important ones are actually missing – most notably Amazon Video, the ITV Player, All 4 and Demand 5. You do get Netflix in its 4K incarnation, as well as Sky News and the BBC iPlayer. But in truth, Philips would have been better taking a leaf out of Sony’s book, hooking up YouView or something built in to compensate for Android TV’s app shortcomings. 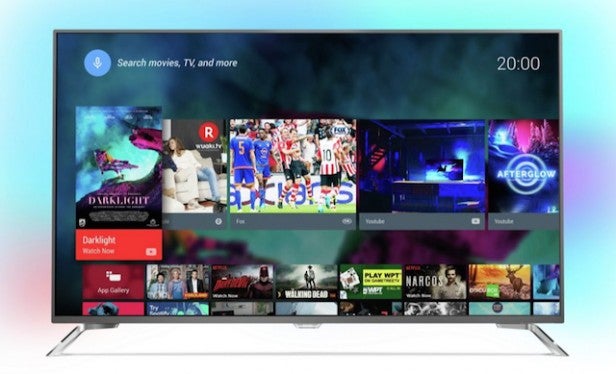 The picture technology in the 55PUS7101 is built around a native UHD LCD panel illuminated by an edge LED lighting system. There’s no local dimming, although the TV does benefit from something called “Micro Dimming Pro”. This breaks the image down into thousands of zones for analysis by the TV’s processing engines, to deliver more accurate and measured results. The system also works hand in hand with a light sensor to add a degree of room condition optimisation to the picture output.

Also noteworthy is the use of a wide colour gamut panel and an HDR “upscaling” system for injecting an HDR flavour into standard dynamic range material.

The picture engine in the 55PUS7101 is a Pixel Precise Ultra HD system. This sits roughly in the middle of the Philips’ picture processing “family”, and is joined by a quad-core processor that just about keeps everything – including Android TV – ticking along slickly.

Lastly, note that Philips has joined Samsung in no longer supporting 3D on any of its 2016 TVs.

The 55PUS7101 is well stocked with picture setup tools – so much so that it’s earned the endorsement of the Imaging Science Foundation (ISF) as a TV that one of its engineers will happily calibrate professionally should you fancy paying for the privilege. Available tools include colour, gamma and white balance management, along with extensive control over all the different aspects of the TV’s numerous processing tools.

Actually the amount of processing options placed at your disposal can make the 55PUS7101 a fairly complicated TV to use. Key setup suggestions I’d make would be turning off all noise-reduction systems when watching 4K and any good-quality HD sources, setting the motion processing to its medium level to try to address the screen’s heavy native motion blur, and setting the Contrast Mode to its Standard setting to improve lighting stability.

I’d also recommend using Ambilight on fairly low – below half way – settings for both brightness and responsiveness; set too aggressively, it becomes more of a distraction than an enhancement to the viewing experience.