The 42PUS7809 is a 42-inch TV with 4K/UHD resolution – which makes it the smallest 4K TV we’ve tested so far. And with a price tag of just £750 from some retailers at the time of writing, it’s also the cheapest 4K TV we’ve looked at.

So we have to ask: does 4K matter at 42 inches, and what corners have been cut to hit such a cheap price?

The 42PUS7809 is attractive for such a cheap 4K TV. Its gloss black frame is exceptionally slim around the top, left and right sides, and although the bottom edge is slightly wider, it still looks lovely thanks to its shiny metallic finish and jauntily angled glowing Philips logo.

Even better, the 42PUS7809 sports Philips’ ever-engaging Ambilight system, which in this iteration fires out coloured light from the TV’s left and right sides that can be set to mimic – with startling local and tonal accuracy – the colours of the image you’re watching. 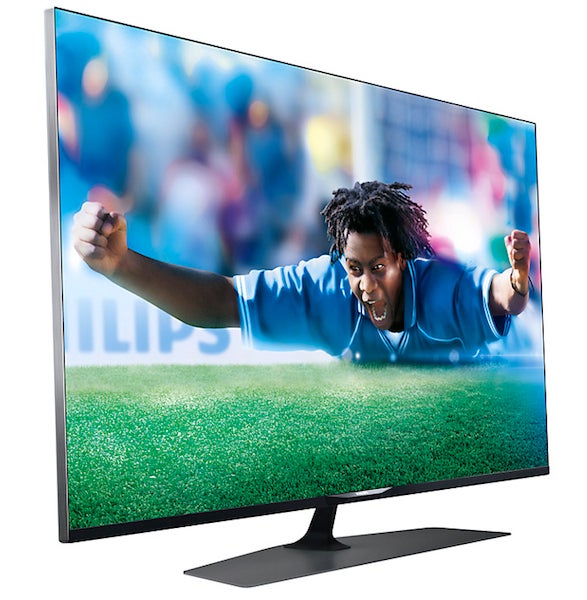 Connectivity on the 42PUS7809 is a serious disappointment, though. Not in terms of the sheer number of connections – the four HDMIs, three USBs, Ethernet and integrated Wi-Fi are actually more than we might have expected for the 42PUS7809’s money. It’s nice to find, too, that the network options support DLNA streaming as well as Smart TV features, while the USBs support recording from the built-in digital tuners (so long as you attach a USB drive with at least 4GB of memory).

However, it turns out that only one of the HDMIs can take 4K feeds, and the streaming isn’t backed up by support for the HEVC encoding system used by Netflix’s 4K streams. The HDMIs are also not built to the v2.0 standard, and so can’t handle 60p 4K feeds.

Philips is working on an external box, the UHD 880, that will enable HEVC streams to be fed to its current 4K TVs, but this won’t be available until the second quarter of 2015 and will come at an additional cost. A better defence for the 42PUS7809’s connection limitations is that 4K Blu-rays, when they appear, will generally be encoded in 24p, and so will play through the 42PUS7809’s bandwidth-limited HDMIs.

Still, there’s no getting around the fact that many of Philips’ competitors include both Netflix UHD support and HDMI 2.0 ports in their UHD TVs now. And you also can’t help but worry about the set’s compatibility with other, as-yet-unconfirmed 4K sources going forward.

Philips subscribes to the ‘good TV pictures need good picture processing’ school of thought, so it’s no surprise to find even the relatively affordable 42PUS7809 equipped with one of Philips’ potent picture-processing engines – in this case, Pixel Precise Ultra HD.

This is only Philips’ second tier of processing system, behind the flagship Perfect Pixel UHD system. But it’s still more powerful than most rival systems, especially as it’s driven by a quad-core processor.

The 42PUS7809 manages to deliver a 600Hz-emulating motion-processing engine, which is a bigger number than we’d have expected from such an affordable 4K TV. Where contrast is concerned, the set doesn’t use a full local dimming system for its LEDs, but it does use a micro-dimming engine that breaks the image down into small sectors for more accurate analysis and a degree of local management.

There’s a concern about the 42PUS7809’s contrast, though, as it uses an IPS-type LCD panel. Many of these have struggled to reproduce a convincing black colour this year, so we’ll have to be on the look out for this problem during the main test phase.

As you’d expect, the 42PUS7809 is equipped with a Smart TV system able to deliver apps and streamed video. However, the Philips Smart platform continues to lag behind the best Smart TV systems due to its limited content levels, and a learning/recommendations system which currently doesn’t seem to do anything significant.

We’ve covered Philips’ Smart service in detail in a previous article, so we’ll limit ourselves here to mentioning its highlights of the BBC iPlayer, BBC Sport, YouTube, Blinkbox and Netflix – plus a startling number of ‘adult’ channels if that’s your bag! There’s no sign, though, of ITV Player, 4oD, Demand 5 or Amazon Instant apps. These may come along at some point, but we haven’t heard anything to that effect. Maybe Philips is just holding out now until it can do a full roll-out of the Android TV platform found on some of its current (but non-UK) higher-end TVs.

One last feature of the 42PUS7809 to cover is its 3D playback. This is of the passive variety, with a generous (by today’s standards) four pairs of glasses included for free. Though of course, passive 3D glasses do cost peanuts compared with active models.

Initial setup of the 42PUS7809 is reasonably straightforward for the most part, with decent guidance on such stuff as getting the TV on your network and tuning in your TV channels.

You do, though, have to spend quite a bit of time with some of the 42PUS7809’s settings if you want to get the best from the set. 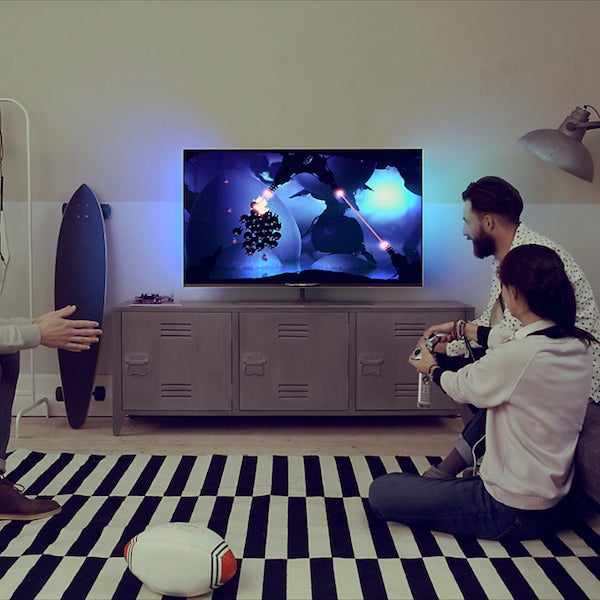 Particularly worthy of attention are the noise reduction, motion-processing tools and contrast adjustments. We’d say you should turn all moise reduction off when watching HD, and especially UHD/4K content, to prevent such sources looking soft and unnatural.

Where motion’s concerned, you should stick with the Perfect Natural Motion system’s Minimum setting or turn it off completely, as higher settings can cause a few too many noticeable haloing and flickering artefacts.

To counter the native black-level problems of the IPS panel, meanwhile, we’d first suggest that you reduce the 42PUS7809’s Video Contrast setting to around 75-80. Second, only use the Dynamic Contrast tool on its Minimum level, as this gives a degree of contrast boost without causing excessively distracting backlight shifts. Finally, we’d advise that you only use the Standard contrast mode, as the other two settings leave images looking too dull or too unstable.

One unusual aspect of the 42PUS7809’s settings is that, contrary to our usual experience, we’d suggest you try leaving the TV’s ambient light sensor on. It does an unusually effective job of automatically adjusting light levels to compensate for your room conditions.