What is the Philips Smart TV 2014 system?

After a rather sluggish and grubby looking smart TV effort in 2013, Philips needs to up its smart TV game for its 2014 TVs. And first impressions of this updated system on the Philips 55PFS6609 TV suggest that improvements are indeed afoot. But do they go far enough?

Editor’s Note: This is a review of the smart TV features of Philips’ TVs, not a specific TV.

Hitting the dedicated Smart TV button on the latest Philips remote immediately soothes your eyes with a much more ‘high-res’ menu design than the rather ZX Spectrum-like effort of 2013. Though we do wish some of the icons made it a bit clearer what exactly they link to.

It’s also nice to see these menus now simply superimposed over the bottom third of the TV picture rather than taking over the whole screen. As well as meaning you can continue to watch TV comfortably (unless you were watching something with subtitles!) while you browse the up-front menus, this overlaid approach makes the smart features feel slick and better integrated into the TV’s eco system. 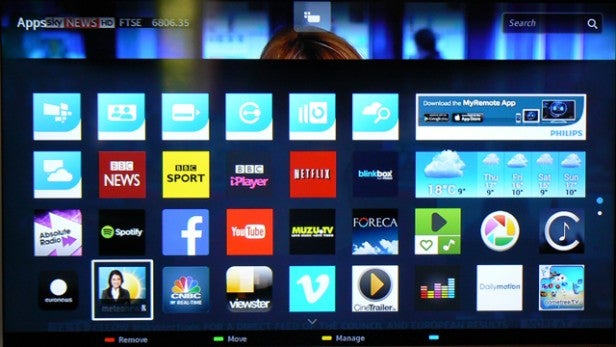 The left two thirds of this opening menu contain 12 icon links ranged in two rows of six. Along the top from left to right are an App Gallery, a Smart TV Payment link, a Social TV link, a Web browser link, a TV on Demand link, and a Cloud Explorer link.

Putting the Smart TV Payment link in such an elevated position in the menus feels a bit cynical and money-grabbing. But we guess Philips could put a positive spin on it by saying that it just wants you to go through the initial hassle of inputting your payment details for the central Philips account to simply your life later.

If you do opt to input your details here, you also get a rather unwelcome reminder of just what a chore it is to put email addresses, passwords etc into a TV using a combination of a TV remote control and onscreen keyboards.

The TV on Demand section culls clips from (at the time of writing) the Euronews and Wall Street Journal online services, offering video news clips covering the past seven days. To be honest we’re not sure this really fits our idea of ‘TV on Demand’; ‘News updates from non-UK-specific content providers’ would have been a more accurate description. But we guess that doesn’t sound so catchy.

The ‘Cloud Explorer’ option, meanwhile, rather handily lets you hook the TV into your Dropbox account, so you can access any media you may have stored there. Though Philips’ latest TVs do also, of course, let you stream photo, music and video content from networked DLNA-capable devices. 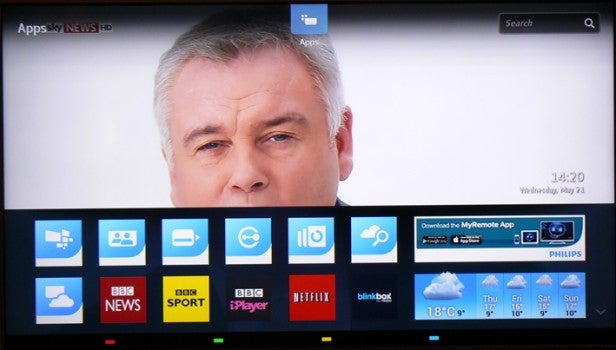 The bottom row of app links on the home Smart screen are labelled Cloud TV, BBC News, BBC Sport, the BBC iPlayer, Netflix, and YouTube. The latter five of these are self explanatory, but Cloud TV is an unusual one. Selecting this takes you to an extensive menu of links to online video streaming ‘broadcasters’. While this sounds welcome on paper, though, the only content source available at the time of writing was Stream-IT – an Italian service. Admittedly this service offers more than 20 channels, but basically they’re all of minimal interest to your average English man or woman. So while Cloud TV could have legs for the future, right now it does little more than remind us of how much unwanted ‘noise’ there is out there on the world wide web.

In the right-hand one third of the opening menu you get adverts for different features on the Smart TV platform on the top layer, and a five day weather forecast from Meteonews.tv in the bottom layer. Unlike the Cloud TV app, this weather app does a great job of automatically recognising where in the country you happen to live.

Click through on the weather report and you get a combination of hour and day forecasts, together with animated up to the minute reports and even live wind flow, temperature, clouds and rain charts. It’s a weather nerd’s paradise.

It’s nice to find that getting to more content options on the new Philips smart engine is no more complicated than scrolling down from the bottom row of initial content options. This brings up two extra rows of content currently spread across two screens amounting to a total of 32 pre-installed apps.

As you’ll see if you managed to stick with that list to the end, there are a few ‘adult’ channels on the list, picking up the smut baton from Philips’ 2013 smart TV offering. Of course an account is required to view these so underage access shouldn’t be a problem. You’ll also have noticed, sadly, no ITV Player, 40D, Demand 5 or Amazon Prime support. 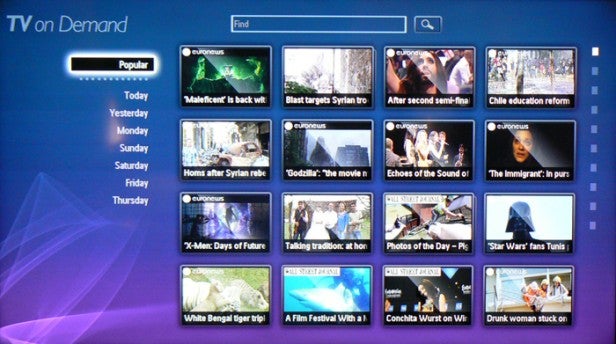 Shifting away from the content element of the latest Philips smart system to its smartphone/tablet features, there’s a decent amount going on via the Philips My Remote smart app. This provides a simple four-feature home screen menu providing leap offs to ‘Simply Share’ (for playing multimedia files stored on your second device through the TV); TV Guide (so you can browse the EPG for things to watch on your second screen rather than on the TV); a Wi-Fi Smart Screen (which allows you to ‘transmit’ the programmes playing on your TV’s tuner to your smart device, even if you’re watching a different AV source on the TV); and finally a Control option that lets you control the TV via your smart device’s touch screen interface.

One final feature of the Philips 2014 Smart TV offering is its recommendations system, where the TV can learn your viewing history and recommend similar content. Or at least that’s what’s supposed to happen; there’s even a box which pops up onscreen during initial installation to tell you about it. However, at the time of writing we could find no trace of this recommended content anywhere on the Philips 2014 Smart TV menus. And after waiting unsuccessfully for three days for clarification from Philips on what’s going on with this feature, we suspect they couldn’t find any trace of the system actually working either!

Used as the main TV for the review period
Tested for more than a week
Tested using industry calibrated tools, discs and with real world use
Tested with broadcast content (HD/SD), video streams and demo discs
Next
Setup and Performance Review