Considering that Philips has shown an instinct for innovation with its remote controls over the past couple of years, it’s disappointing to find that it has decided not to ship the 55PFS6609 used for this review (despite this set being one of the highest models in Philips’ new range) with one of its ‘keyboard’ remotes.

These remotes, found with a number of 2013’s Philips TVs, feature a full QWERTY keyboard on their rear, which we found very useful when it came to the ever-tedious process of inputting email addresses and passwords when setting up and accessing various online services.

We guess maybe Philips figured that the My Remote app’s ability to control the TV negates the need for a ‘hard’ keyboard. But not everyone has a smart device, and also as noted in the previous section we can readily imagine that many users won’t even realise the My Remote app exists.

It’s worth adding that the latest Philips TV system is pretty restricted in its input options, with none of the voice control, gesture control or point and click control options offered by some other smart systems. But there’s an argument to be made that this just helps keep things nice and simple. 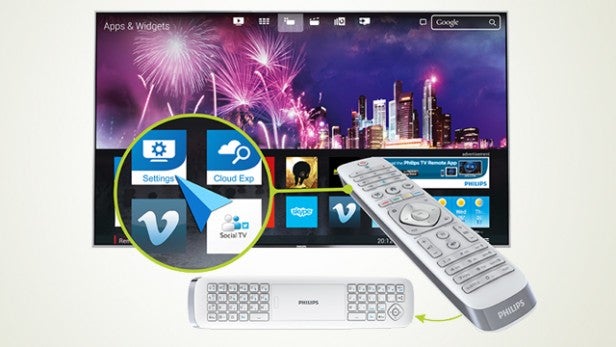 While the latest Smart offering from Philips certainly moves things in the right direction, with better looks, more content and a sensible preference for a single-hub menu approach, it’s still lacking in content and sophistication compared with some of its rivals.

It isn’t helped, either, by its lack of UK content localisation versus some rival systems, which creates the impression that those rival systems are working much harder for consumers in different territories than Philips is. The lack of most of the UK’s key catch-up TV platforms is also inevitably a major issue – though to be fair only Samsung covers all of these.

Essentially the Philips Smart TV system can only in its current form be considered a ‘bonus’ feature on its TVs, rather than a compelling reason to buy a Philips TV.

Philips is mostly moving in the right direction with its Smart TV platform and shows a growing understanding of what works in smart TV interface and content terms. However, it’s still some distance behind the best rival systems on both the content and feature fronts, and the build we tested was rather buggy. Needless to say, we await Philips’ upcoming Android-driven TVs with interest.