PES 2017 is like a great coach. Great coaches don’t just pick the team and relax, but make every player better through incremental improvements to get individuals to work as a team. Through simple controls and fluid gameplay, PES 2017 removes the disconnect between thought and action for the first time in a football game. It’s your own private Guardiola. It’s a shame then that the best game of football is let down by a lack of innovation off it and ongoing online stability problems.

The players on the pitch somehow telepathically know what I’m trying to achieve, and at times the it’s simply breathtaking. This is the best game of football I’ve ever played. New tactical innovations and added depth only serve to remove barriers further. Off the pitch a minor facelift isn’t enough to match the level of innovation on it, but when the football is this good, it doesn’t really matter. 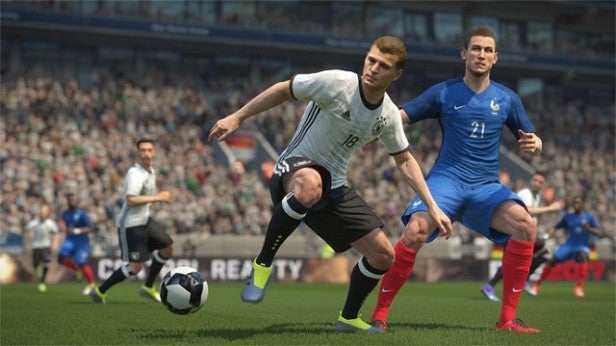 Konami has been very bullish in the lead-up to PES’s launch. We’ve heard boasts of countless innovations in 2017, from ‘Player ID’, hundreds of new player animations improving first touch, and even attacking the licensing issue head-on by securing deals with some of the world’s biggest clubs. Some stand out more than others, starting with the new player animations.

Within my first few matches there were at least half a dozen moments I sat back and watched replays of, desperate to share their glory with the world. As Real Madrid (or MD White, to give them their unofficial title), I scored a Karim Benzema goal worthy of any highlight reel, and pushed all of three buttons. Starting at full-back, an interception from Dani Carvajal led to a long ball up the wing, played deliciously with the outside of his boot, which Gareth Bale controlled expertly from behind with his heel, taking the ball in his stride. A double-tap of the cross button led to a low-driven ball right into the path of Benzema, who had expertly got in front of his marker in the box, and was able to tap the ball home with a backheel.

The pass with the outside of the boot, the control with the heel and the backheel tap-in required no additional controller input from myself, but were all exactly what I hoped the players would do. Carvajal needed to make the pass with the outside of his boot to apply the right spin on the ball for the pass to beat the defender, Bale needed to use his heel to control the ball to avoid turning to control the pass, which was behind him, and the same for Benzema’s backheel. To be able to know these players possess the ability to make the best type of play according to the context – without me, as the controller of these superstars, having to press four or five buttons – means I feel truly connected to the game. 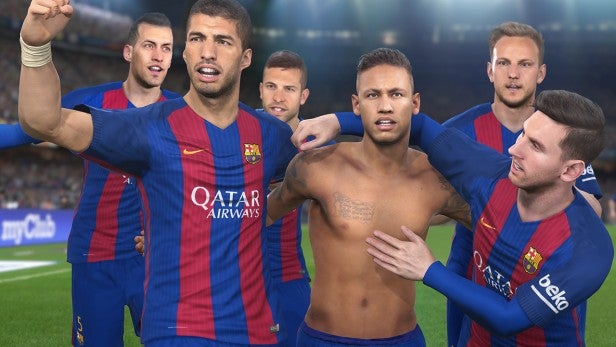 It’s something which has plagued the FIFA series for years, over-complicating the control scheme in order to add depth and complexity to the football. The fact that PES creates beautiful football with such little effort on behalf of the player is a huge feather in its cap.

This doesn’t mean the player is a passenger, either. The contextual system simply serves to remove barriers between what you want to happen and it actually happening. Build-up play and the variety of ways a goal can be created are amazing. Each team requires different approaches in order to play to their strengths. As Madrid I focused on wing play, with Bale and Ronaldo attacking with sheer pace and tenacity. Barcelona keep the ball on the floor, playing through the middle and using Iniesta’s close control to outwit defenders and create space for the front three. You still have to execute your game plans and tactics, and Konami has improved this with new advance instructions.

Thanks to signing licenses with the likes of Liverpool, Dortmund and Barcelona, players can now try and play like them with new attacking and defensive philosophies, including Gegenpress, Tiki-Taka and False 9. In practice, these strategies have been implemented excellently. It really is noticeable when a team has one of these tactics selected, both in the case of opponents and with teams you’re controlling. You’ll barely have room to breath against a team using Gegenpress, while your forward will come running towards your midfielders, leaving huge space up front for your wingers to attack, when using a False 9. 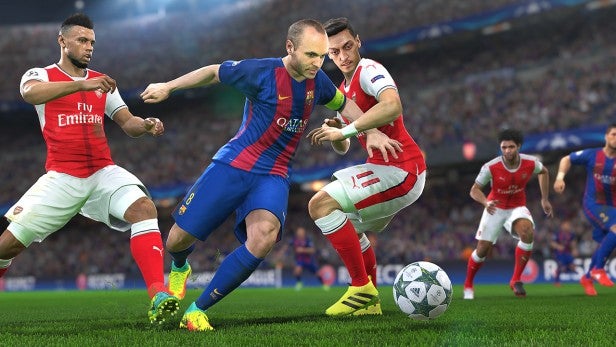 Naturally, however, being the first year these new features have been added, there’s a lack of options, meaning you’ll soon feel as though you’re running out of choice and variety. Unless you want to attack like Barcelona or defend like a Jurgen Klopp team, the philosophies available won’t cater to your every tactical need. It’d be great if, in future iterations, players could craft their own tactics, so we can fall on our swords during a match, just like real managers.

With licenses secured with the likes of Barca and Liverpool, these teams play much closer to their real-life counterparts, and this leads to another problem. With Konami making such a big push with the handful of licenses its secured, it only serves to bring the notable absentees further into the light. However, to counter this, the developer has also made it very easy to download the official kits which the dedicated PES community works so hard to build each year with file sharing. Click here if you want to know how to download the Option File into your game.

In terms of modes, all those from last year make a return with a much-needed facelift to the user interface, providing a cleaner and more accessible experience. However, functionally the likes of the Champions League, Master League and Become a Legend remain largely the same. 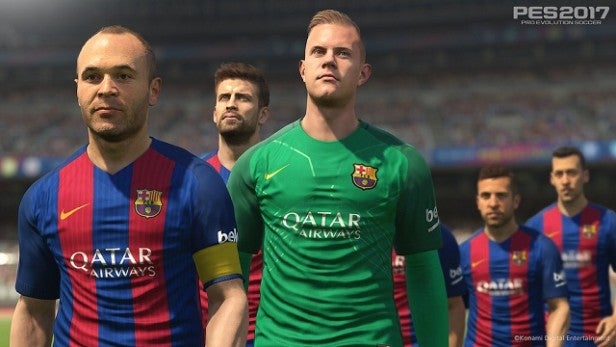 The only notable change is the introduction of transfer deadline day in Master League, with players able to make one incoming or outgoing transfer decision every two hours. It’s a weird system, but once you get your head around it, it does force more considered decision-making. Just don’t leave everything to the last minute or your team could be left massively short of bodies.

Now that the game is out in the wild, the servers have come online and I can jump into multiplayer matches, and here is where the real problems rear their ugly head once again. Server stability, lag and disconnects were game-breakingly frequent in PES 2016, and while there are signs of improvements this year, it’s not enough. I’m still suffering input delay, which means the fast and flowing football which makes offline so brilliant becomes a frustrating and jarring experience. Lag means your tactics and plans for a phase of play get completely thrown out of the window at times and there’s even incidences of the match freezing for a second or two.

That’s all once you get into a match, with matchmaking taking at least a few minutes to find me an opponent, even when I free up the restrictions. Better than last year, yes, but nowhere near good enough.

It’s such a shame because this was a huge opportunity for PES to truly be a FIFA contender. With the football being the best its ever been (and arguably better than its EA rival), being able to take that experience seamlessly online was a must, but Konami has missed a wide open goal. Hopefully the server issues improve in time.

PES 2017 plays the best game of football I’ve ever experienced, offline. Online it continues to suffer with similar issues to last year’s entry, albeit there are improvements across the board but nowhere near to the level I was hoping for. I’ve been able to enjoy some lag-free matches, but these tend to be the exceptions which prove the rule.

With FIFA 17 bringing forth changes across the board, the competition is fierce this year. Konami had the chance to truly stake a claim as the champions this year, and certainly did so on the pitch. Off it? There’s still a bit of work to be done.

However, if you’re looking to play an amazing game of football, PES is the best it has ever been.