So how does it all work in practice? At the time of writing the answer depends on which smartphone you own. If it uses Android, the answer is ‘brilliantly’. If you answer ‘iPhone’, the answer is: wait for iOS7.

Let’s be clear, the latter isn’t Pebble’s fault. Pebble requires iOS6 to run, but it offers little by way of third party support. Officially this means the Pebble can only consistently receive notifications from SMS and iMessage, control music playback and accept/reject calls. An iOS6 bug currently means switching other notifications to be viewable in the lock screen (settings > notifications > *app* > view in lock screen) will send more notifications through to Pebble, but they aren’t always reliable.

The good news is smartwatch support in iOS7 appears to be greatly improved, but we’d hold fire for now until Apple makes this official.

As for Android, the experience couldn’t be more different. Pebble revels in Android’s more open architecture and whereas the iOS app is extremely limited, the Android app offers a wealth of options (see above for the contrast) and will send notifications from just about any third party app installed. In fact there is a ‘send 3rd party notifications’ option which works superbly.

One curious limitation which iOS does offer, however, is calls can only be rejected not accepted. A restriction we’d hope to see fixed soon with Android 4.3 imminent and Pebble app updates coming every two to three weeks. 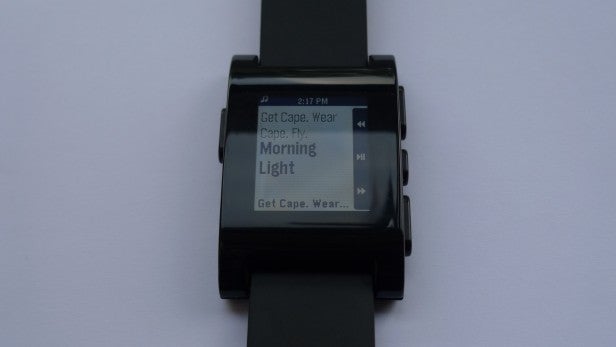 As for the experience using Pebble, it is very good. Notifications come through quickly (particularly on Android) and the vibration, while strange at first, becomes quite reassuring. You know you aren’t missing anything on your phone if Pebble doesn’t alert you. The Bluetooth connection stays paired up to 30 feet or one wall away too so if your phone is in another room Pebble will still react to things. In fact, it feels second nature within days to look at Pebble rather than your phone.

Looking at the Pebble screen is a pleasure as well. It is easily readable in daylight and the backlight kicks in seamlessly in darker conditions. Alerts are easy to navigate with the up and down buttons and with up to 500 characters displayed you get the gist of even long emails. If you need to read further you’d want to pull out your phone in any case.

Interestingly, multiple alerts will queue up on Pebble’s screen and can be scrolled between, but once they are dismissed (hitting the ‘back key’) you won’t be able to get see them again. This can be frustrating if done by accident, but it also keeps the system simple. Neither Android nor iOS syncs notifications as read once they are checked on Pebble (and there is no way to delete content from the watch), but again this additional functionality should come with the wider privileges both platforms are expected to grant in their new versions. 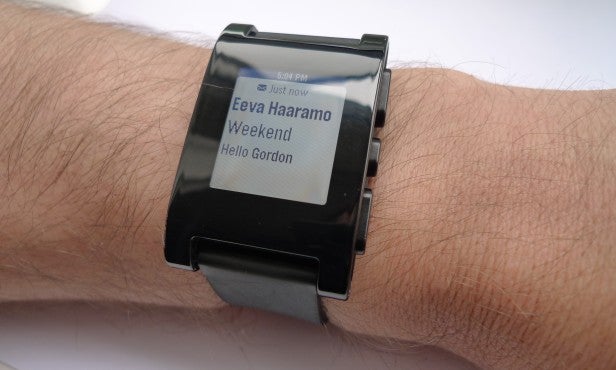 Lastly, battery life. It is claimed the Pebble smartwatch will last up to 7 days with light usage and 5 days with heavy usage. We found we got less than that – five days and three days with light and heavy use respectively – but both figures are enough to mean charging isn’t a daily chore or something to be feared if missed. Pebble also fully recharges in just two hours.