What is the Pebble watch?

This is the smartwatch that first got the world interested in smartwatches. Pebble is an Android and iOS compatible smartwatch with open source operating system that retails for just $150 (£99). It arrives 12 months after a record breaking KickStarter campaign that raised over $10m (100 times its funding target) in just five weeks. So… no pressure. 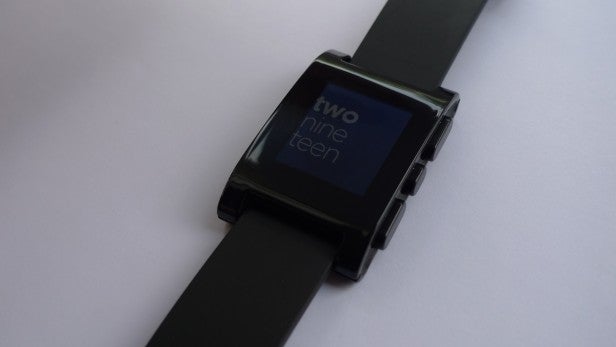 For all its hype, the first thing you notice about the Pebble smartwatch is how understated it is. No bulky, bulging curves, no myriad of buttons and no thoughts it might look better on the arm of Optimus Prime. The Pebble watch looks like a normal watch and – at just 50 x 32 x 11 mm and 38g – it feels like a normal watch. This is a very good thing.

Then again it is also possible to say Pebble smartwatch feels like a normal, cheap watch. Its casing is made entirely from plastic as are its buttons and the screen is a fingerprint magnet.

Despite this, though, the Pebble watch isn’t fragile. It is durably constructed and has a water resistance rating of 5ATM. This means it can be submerged up to 160 feet in both fresh and salt water and will happily allow you to swim or shower wearing it.

Explorers shouldn’t be scared off, either. The Pebble smartwatch works in temperatures ranging from -10 to 60 degrees centigrade. Meanwhile we found the 22mm rubber strap to be comfortable and it resists bumps and scrapes. The standard strap fits wrists with a circumference between 14cm and 21cm while for an extra $3 (£2) an extended strap will fit wrists up to 24cm. 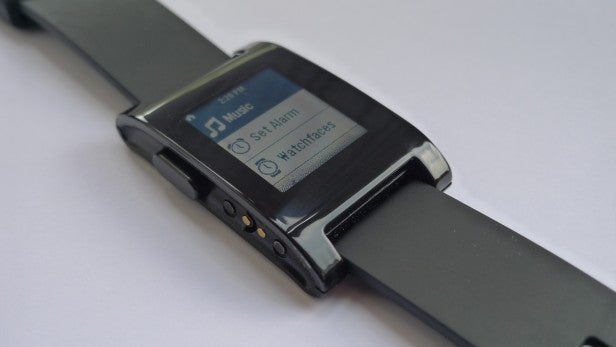 Subtle as its looks may be, they aren’t what has gained the Pebble watch such attention. Pebble’s appeal lies in its functionality and, more specifically, the simplicity of its functionality.

Like the MetaWatch Strata, Pebble’s approach is not to be a mini-smartphone but a ‘thin client’ receiving handset notifications over Bluetooth. What it can receive varies significantly between iOS and Android (more of later) but includes email, SMS and social media alerts along with calendar reminders. It can also control music playback and accept or reject incoming calls.

The Pebble watch has a number of unofficial apps too made using its open SDK, which brings additional third party functionality from customisable watch faces to basic games like Chess and Space Invaders.

Getting back to the watch itself, all this is displayed by an e-paper 1.26-inch, 144 x 168 pixel monochrome screen and controlled by just four buttons. A back button on the left side and select and up/down buttons on the right side. The screen also has a backlight that can switch on automatically depending on the lighting level or be set to activate with a flick of the wrist. A nice touch. 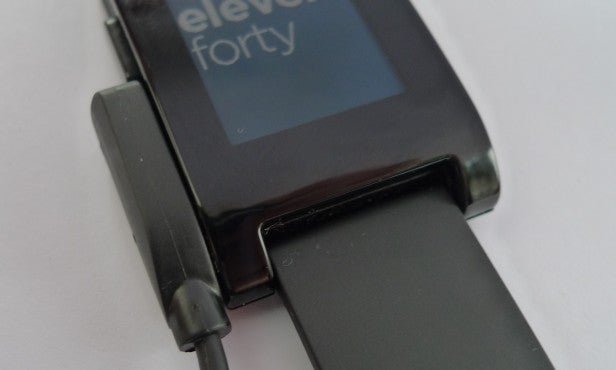 On the left side of the watch are four metal contact charge points. The lack of microUSB is to keep it water tight, and while it means carrying a proprietary connector it is much lighter than the bulky charger for the MetaWatch and is neatly held in place with magnets. Despite this microUSB and a simple rubber stopper may have proved more convenient.

As for setup, it merely involves pairing Pebble with your handset via Bluetooth and installing the official app which lets you toggle which notifications you want. Once your choices are made these are wirelessly synced automatically with the watch and you’re ready to go.