Available on iOS
There comes a time in every developer’s life where they have to put out a clone. Or, if they’re feeling especially clever, a composite of different clones. The latter is like the equivalent of a ‘super group’, cherry picking the lead guitarist from one band, the drummer from the other – albeit in this particular context it wouldn’t be the actual guitarist or drummer, but rather those from tribute acts who play down The Dog & Duck.

King, of course, is by no means a stranger to such practices. Though heavily routed in match-threes and associated puzzlers, its signature has been to sift through the best and most effective elements from other games in its chosen genre and mould them altogether into the kind of commercial prospect that just delivers. Whatever may have been showcased at Gamescom the other week all “stole the show” at E3 a couple of months back, the fact remains that Candy Crush Saga is the biggest game on the planet right now, and has been for some time. 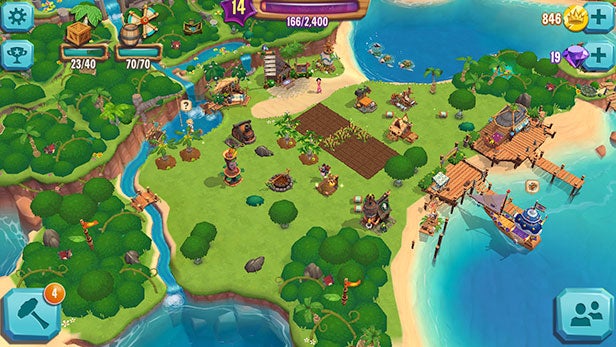 It’s a legacy that means that, if a King game survives a soft launching run on the other side of the planet and makes it out in the UK and US, you know the company is fairly certain it’s going to be success. Indeed, none of the words written below this sentence are likely to have any bearing on that fact, but we can say one thing for sure: Paradise Bay is not especially fun, it’s not worth your time, and it’s no feather in King’s cap whatsoever.

If the depths of those three statements haven’t quite sunk in yet, the opening of Paradise Bay should be enough to convince you that there’s very little that’s unique or even compelling as part of what’s on offer here. Set on a tropical island sat in the middle of the deep blue sea, your primary role is one of trademaster. Strip away all the fixtures and fittings (which comprise of the kind of overtly cheery characters that would be too upbeat even for a Disney movie) and your job is to use the island’s resources to meet orders. 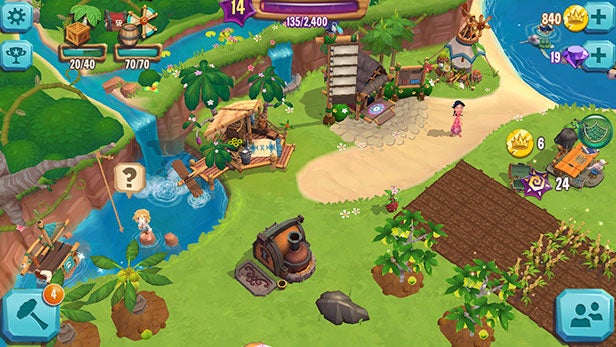 Whether this means strapping on a net to the top of a turtle’s shell and sending him out into the bay to catch fish or growing bamboo in the ground and fashioning it into planks of wood, your entire role in the game relies on you setting such processes in motion on repeat in order to make the items the game’s NPCs wish to trade. To begin with, Paradise Bay naturally engages in a fair amount of hand holding, explaining how you meet these orders and open up new areas of the island in the process.

It is, essentially, the same trick played over and over again. Want cotton for those fishing nets? You’ll need to farm the land, planting the seeds that naturally take a certain amount of time to bloom. Once you’ve harvested it Farmville style, it’s then time to turn that cotton into those aforementioned fishing nets – a process that, as you might have guessed, also takes a chunk of time. The key, as with all such empire builders, is to keep everything ticking over. If you don’t want to spend the game’s primary currency – gems – in order to obtain items you haven’t made yet, then it is a case of watching and waiting, making sure that you’ve got every plate spinning that you possibly can in the meantime. 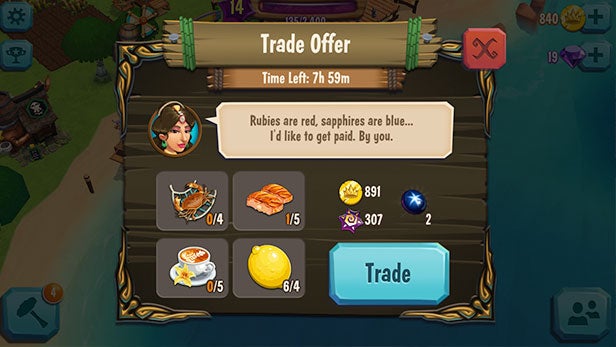 The long term goal from all of this is to open up more and more of the island, unlocked with credit once you’ve levelled up to a particular stage. Woven into the trading that gets you there are little plot points that attempt to baste these menial tasks with some kind of context – the appearance of a friendly pirate an early effort to build play around an ‘event, for example’. For the most part, however, Paradise Bay is a game that has little room for creativity (beyond the layout of your expanding island empire) and instead simply focuses on handing out tasks. It’s like a modern day Mary Poppins, dressing up especially dull activities like tidying your room or taking your daily medicine with catchy songs so you don’t notice just how mundane they actually are.

And there you have it. Dress this package up in some bright, inoffensive clothes and keep the loop turning over, and you’ve got an island exploring ‘adventure’ that will likely bring in dollars aplenty for King, but in terms of actual gameplay and any semblance of fun, is something of a non-event. More so than any other free-to-play packages we’ve played from any of the big guns, this feels like little more than a process – a process designed to keep you on board for little other reason than pure habit for as long as possible, but delivering very little in the way of entertainment or reward. 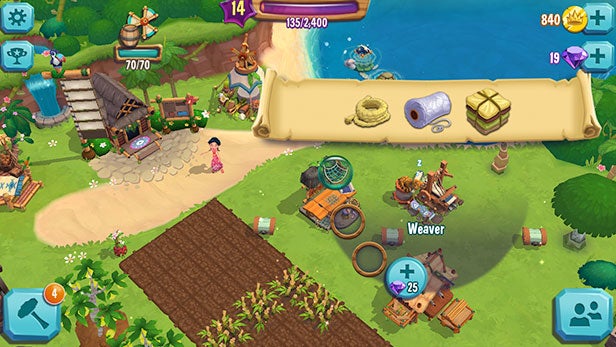 Arguably, this is a low point for mobile’s new masters, where the desire to keep players engaged has now far surpassed any intention of actually making a good game for them to be engaged with in the first place. So, if Paradise Bay is to have any other purpose other serving up some especially delicious player stats for the boys and girls at King, it should be as showing all the other developers who follow it down this especially barren path just how not to do it.

Verdict
Utterly professional, slick and likely very successful in the coming months, Paradise Bay is nevertheless a sterile little package that puts process and keeping players engaged in a loop well ahead of serving up a game that relies on the player having any level of skill or one that rewards them with fun.