Yup, there’s no doubt about it: 2012 is definitely the year when Panasonic gets serious about LED TV.

Design
And then there’s the Panasonic L42WT50. This 42in TV, perched glamorously on our test benches this very moment, belongs to Panasonic’s new flagship LED range. And it’s fair to say that it well and truly lives up to this elevated status in terms of both its looks and its features.

Aesthetically it’s a bolt from the blue. Gone are Panasonic’s traditionally rather dull, or at least conservative, looks. In is a stunningly slim bezel that looks for all the world like something you’d expect to (barely) see wrapped round one of Samsung or LG’s most stylish TV efforts. 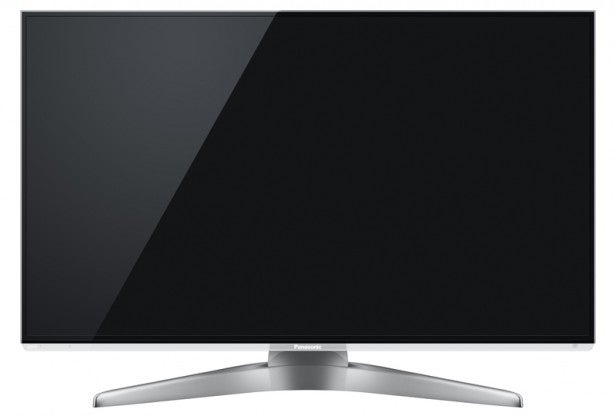 What little there is of the bezel is very attractive too, its main centimetre or so of blackness offset beautifully by a silver outer trim and, along the bottom edge, a cutely illuminated Panasonic logo. Wrapping things up perfectly is a startlingly bold ‘boomerang’ stand design.

Connections
Once you’ve recovered from the shock of seeing Panasonic go design crazy, you’ll find that it has plenty of jacks to keep high-end users happy. These begin with the inevitable four HDMIs – all built, of course, to the 3D-friendly v1.4 standard.

But the set is also distinguished by its provision of three USBs, an SD card slot, Bluetooth support for keyboards and headphones or external speakers (though you can’t deliver files from Bluetooth  devices to the TV), a LAN port for wired connection to a router or DLNA PC, and finally built-in Wi-Fi.

Looking at some of these connections in more detail, the USBs can play a very satisfying range of video, music and photo files – as well as allowing you to record to USB HDD from the set’s two (Freeview and Freesat) integrated HD tuners. The SD card slot also permits recording, and will play back the same file types as the USB ports.

The Bluetooth support is, we believe, a first for Panasonic, and represents the first time we’ve seen this on a TV since it was experimented with a couple of generations ago by a few high-end LG TVs. As for the sort of DLNA and especially online features delivered by the LAN/Wi-Fi support, they’re bolstered significantly, as we’ll see presently, by the set’s use of a dual-core processing system. 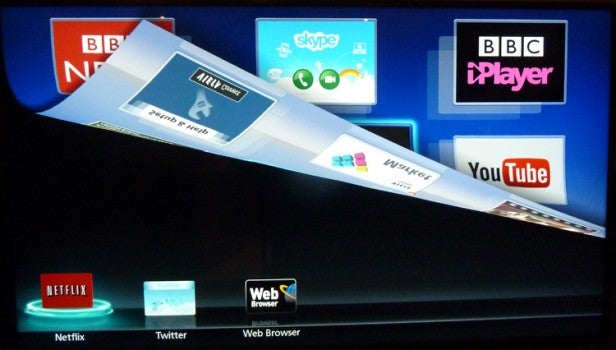 The big ‘trick’ delivered by the dual-core processors is multi-tasking. For the first time on a Panasonic TV, you can truly do multiple things at once. For instance, you can Skype a friend at the same time you’re watching TV. Or you can have multiple apps open at once, so that a quick press of the Viera Tools button causes the corner of the screen you’re looking at to ‘fold up’ to reveal instant-access icons for the other apps you have open. Very nifty.

Number games
The dual-core processing should also prove handy when it comes to the TV’s video processing – indeed, it’s likely responsible for the extremely eye-catching claim by Panasonic that the set runs with a 1600Hz scanning rate. Closer examination reveals that this is actually – inevitably – not a true 1600Hz rate, but rather a native 200Hz scanning panel combined with a backlight that blinks eight times for every frame of the image. But it’s still an impressive number achieved by a clearly advanced edge LED lighting array.

There’s one further dual-core benefit worth mentioning too. Namely that it adds Flash support to the integrated web browser.

It probably hasn’t escaped your attention that 2012 is the year of alternative control systems. So it’s not entirely surprising to find an impressively advanced iOS and Android Viera app for the Panasonic TX-L42WT50 that allows you to share video between your portable device and your TV. Indeed, this app is so flexible and representative of what will likely be the shape of control systems to come that we’re going to be looking at in a dedicated review in the next few days.

Only available with the WT50 models in Panasonic’s new TV range, this second remote seems on paper to be a mighty fine idea. After all, as we discovered with the touchpad remote supplied with the Samsung 55ES8000 TVs, exploring onscreen menus and especially surfing the internet is much easier with a touchpad than a normal remote. 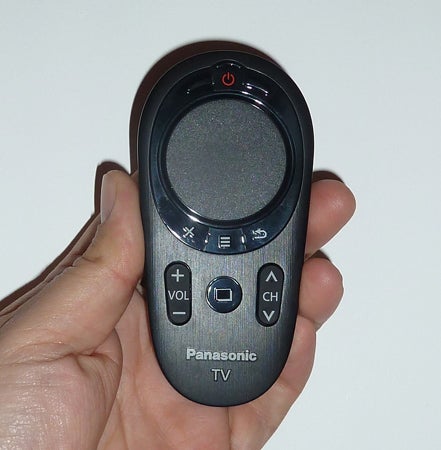 However, it quickly becomes apparent that Panasonic’s take on the touchpad needs a bit of work. For a start, the area available for moving your fingers is too small – especially as the relative insensitivity of the pad means you often have to move your finger quite extravagantly to get the onscreen to cursor to move.

Yet another problem is the way you have to jab the pad to select a link or onscreen keypad letter. The amount of pressure needed seemed variable during our tests, and we also frequently found simply applying our fingers to the touchpad ready to move it around would cause the pad to think we’d pressed it to select something.

With a little practice the second remote does become more usable and even sometimes helpful – but there’s certainly still a lot of room for improvement.

We should cover Panasonic’s Viera Connect service before we go any further. But as we’ve covered this in detail in other recent Panasonic reviews, such as the one of the Panasonic L42ET5, we’ll restrict ourselves here to just listing the highlight services: Netflix, AceTrax, the BBC iPlayer, Skype (via an optional extra camera), YouTube, EuroSport, BBC News, Fetch TV, Twitter and Facebook. 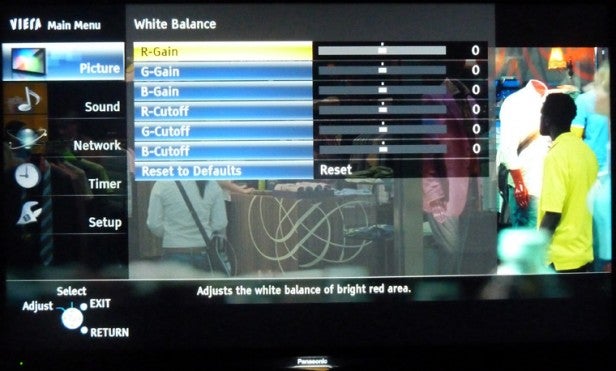 The Panasonic L42WT50 is well equipped with picture adjustments, as you would expect of a flagship TV. In fact, the set is so flexible that it’s endorsed by the Imaging Science Foundation. Among the highlight options are white balance and gamma adjustments, as well as Panasonic’s Intelligent Frame Creation motion processing and the option to turn on or off the set’s ‘Area Dimmer Control’, which introduces a degree of local dimming to the edge LED system.

Enthusiasts will probably welcome, too, a new ‘1080p Direct’ mode that essentially turns off all the TV’s noise reduction and scaling circuitry, so you can enjoy a high quality source in its purest form.

Picture quality
Finally we get to the L42WT50’s picture quality. Has Panasonic been able to deliver plenty of quality despite the sudden shift to such a radically slim design?

Let’s start with what’s for our money the star of the show: its 3D pictures. These look bright, colourful, wonderfully detailed, full of depth and… well, not far off perfect. They even manage to largely avoid active 3D’s dreaded crosstalk problems, except for very minor traces of it that appear only under the most taxing of circumstances, such as the occasional shot where Mother Gothel sings “Mother Knows Best” against a near-black backdrop in Tangled.

The Panasonic L42WT50 also excels in 3D mode because the inevitable dimming impact of Panasonic’s latest active shutter 3D glasses hides the set’s slight difficulties with black level – difficulties we’ll get into in a moment.

Although it was the L42WT50’s 3D pictures that most caused our mouths to hang open in admiration, it is an extremely talented 2D performer too. Without the 3D glasses on it’s easier to fully appreciate just how punchy and dynamic its colours are, for instance. Yet as with all the best LED TVs, this vibrancy is accompanied by an extremely wide colour gamut and so much accuracy and subtlety when it comes to colour blends that we never once saw a single ugly colour ‘stripe’ – unless it was there in a source.

The Panasnonic L42WT50’s motion handling looks just as good in 2D mode as it did with 3D too, with seemingly next to no resolution getting lost as objects cross the screen – especially if you plump for using the Intelligent Frame Creation system (albeit only on its lowest setting if you don’t want a few artefacts to crop up). 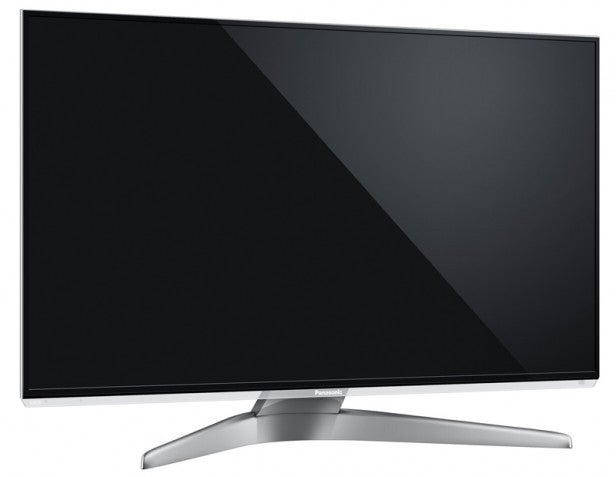 HD pictures in 2D mode are detailed and sharp, meanwhile – and as we’ve just noted, this clarity is not seriously reduced by motion.

With the L42WT50’s pictures also proving watchable from a slightly wider angle than those of most LCD TVs; standard definition sources upscaling to the full HD screen really well; and input lag measuring a gamer-pleasing 32ms, the only chink we managed to find in the L42WT50’s picture armour concerns its black level response.

Thankfully, activating the Area Dimmer Control has a profound and instant impact on the screen’s black level performance. However, this improvement comes at a marginally annoying cost, in the shape of the occasional light ‘block’ around very bright objects if they appear against very dark backgrounds. 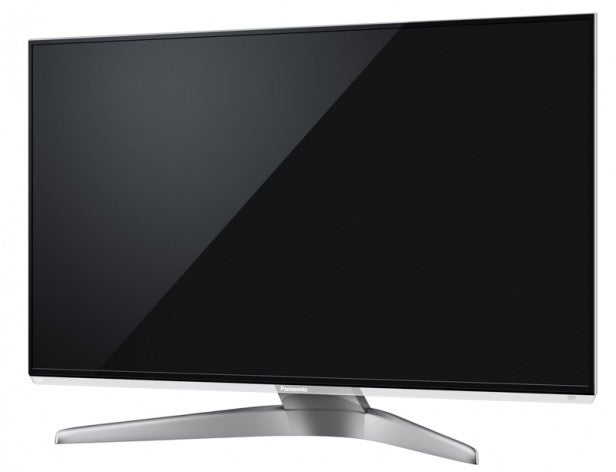 Not surprisingly this phenomenon can be distracting when it appears, making us think it might have been sensible for Panasonic to have allowed you to adjust the intensity at which the area dimming feature worked. However – and this is a pretty big “however” – it must be said that the light blocking phenomenon really does only crop up on extremely rare occasions.

At no point, though, did this minor flaw, or a rather run of the mill audio performance, ever make us consider not giving the L42WT50 a well-earned Recommended badge.

Verdict
The Panasonic L42WT50 really is a frighteningly good LED TV from Panasonic, combining frequently gorgeous pictures with a hugely fashionable design and a long and effective feature list. Black level obsessives will still prefer one of Panasonic’s also brilliant new plasma TVs, but we can also readily imagine some previously die-hard plasma fans having their heads well and truly turned by the L42WT50’s dazzling charms.