Having kicked off its 2012 TV range in very respectable if rather unexpected fashion, with the passive 3D L42ET5, Panasonic’s second foray into our test rooms, the Panasonic TX-L37E5B, finds the brand on more familiar ground.

The L37E5 is, as its name suggests, a 37in TV (a size increasingly shunned by other brands). It’s an LCD rather than a plasma model, with the absence of a “T” from its name revealing that, unlike the ET5 series, it doesn’t have any 3D capabilities.

This is not to say it’s a completely stripped back, feature-free affair, though. Particularly surprising given that the L37E5 sits just one rung off the bottom of Panasonic’s latest TV range is its carriage of Panasonic’s Viera Connect service. The set also claims to have a 150Hz cycle – though please note that in ‘reality’ this is actually a 50Hz native scan rate backed up by backlight scanning. 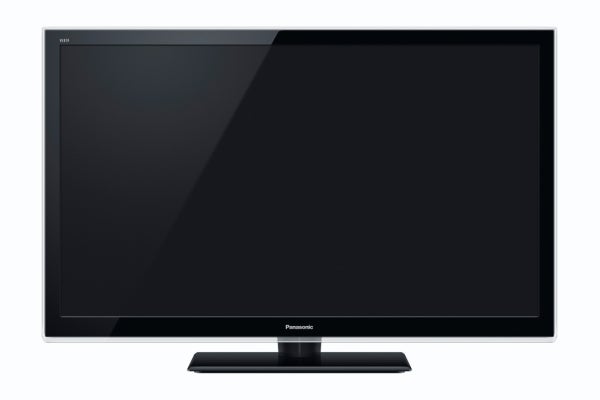 Unlike the LG-panel ET5 series, the L37E5 is all Panasonic’s own work. Which means it has a Panasonic IPS Alpha panel inside, designed to deliver watchable pictures over a wider viewing angle than ‘normal’ LCD panel designs.

Despite its affordability, the Panasonic L37E5 also enjoys a Full HD native resolution and edge LED illumination, as well as some (admittedly fairly minor) processing tricks in the form of Clear Cinema to improve vertical resolution for movie images, and a digital noise reduction system.

When it comes to setting the TV up, you can call up an Advanced picture setting menu that lets you adjust the set’s white balance and gamma settings. We were quite pleased to discover, too, that the set supports pretty wide-ranging video, photo and music file format playback from USB sticks or SD cards, as well as the option to hook up to DLNA-enabled PCs.

Connectivity
Other connections beyond the SD slot and two USB ports used by the above features include a welcome four HDMIs and the inevitable LAN port for hard wiring the TV into your network. You can also connect the TV to a Wi-Fi router, but only if you first splash some extra cash on an optional USB Wi-Fi dongle. Unlike the ET5 series, Wi-Fi is not built in as standard. 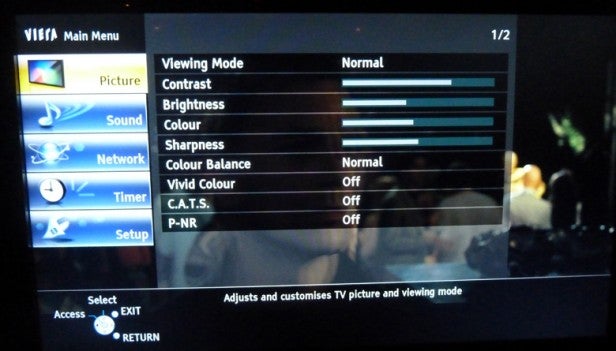 Design
Something the Panasonic L37E5 does share with the ET5 series, though, is surprisingly attractive looks. Panasonic has finally got its act together in this increasingly important area of TV appeal, with the L37E5 boasting a crisp glassy finish over its stylishly angular black bezel, rounded off by a cute little transparent trim extending beyond the main frame.

The L37E5’s operating system, meanwhile, is… OK. The remote is respectable, but there’s a growing sense that Panasonic is shoehorning more and more features on to an old design that’s struggling to cope.

As for the onscreen menus, the main set up ones are rather bland and cluttered looking. Especially when compared to the menus sported by some rivals these days. But so long as you don’t let yourself be intimidated by them, the menus are reasonably logical in their organisation. The one serious annoyance is that you can only access the white balance and gamma adjustments in the Picture menus if you first select an ‘Advanced’ option in the Setup submenu.

Viera Connect
There’s more mixed news with Panasonic TX-L37E5B’s Viera Connect menus. On the upside, Panasonic’s Marketplace for buying apps and even hardware accessories (including joysticks, keyboards, 3D glasses, weighing scales and a future treadmill capable of syncing with the TV) is very nicely designed, with sensibly sized icons and some thoughtful shortcuts to get to different market sections.

The main Viera Connect menu system is also attractive with its unusually large “window” icons showing the content each icons leads to. However, the size of the icons prevents many of them being fitted onscreen at once, requiring you to delve tediously through multiple layers of icons to get to some of the available apps. 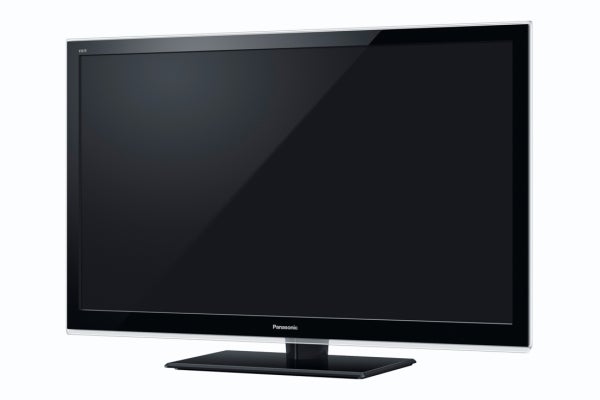 Highlight services of the latest Viera Connect platform include BBC News, Skype (via an optional extra camera), the BBC iPlayer, EuroSport, YouTube, FetchTV, Twitter, Netflix, Facebook, Acetrax and, for the first time on a Panasonic TV, an open web browser. There are also quite a few more smaller apps than seen in last year’s TVs, covering everything from Karaoke to basic games. Of more interest are a duo of surprisingly high quality games from Gameloft: the Asphalt 5 racer, and the self-explanatory Let’s Golf.

Picture quality
The Panasonic L37E5’s picture quality is for the most part good. Even though this is one of Panasonic’s most affordable LCD TVs, for instance, it’s clear right away that the most notable problem with many of the brand’s 2011 LCD TVs, a rather average black level response, has been greatly improved. While the grey mist that appeared over dark scenes on earlier 2011 models is certainly not completely absent on the L37E5, it’s certainly less aggressive – a fact that also helps the set resolve shadow detail in dark scenes more comfortably.

Having a more convincing black level response delivers another predictable benefit too: more natural colours, especially during dark scenes. The set is able to resolve tones credibly down to a much deeper level than its predecessor could – yet crucially this benefit is achieved without compromising the set’s ability to look punchy and dynamic, with brighter, more vibrant colours. In fact, being able to appear against deeper black colours helps generally bright scenes look more eye-catching and potent – even after calibration – than was the case with last year’s equivalent Panasonic LCD models. 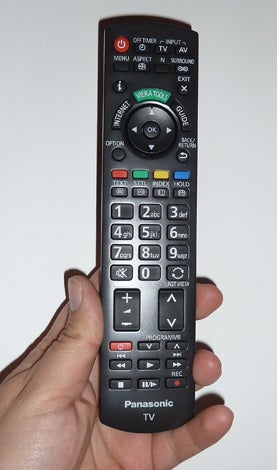 Another strength of the L37E5 versus many of its LCD rivals is the consistency of its backlighting. We didn’t become aware of any particular parts of the picture that looked obviously unnaturally brighter than others, even when using a purely black screen feed.

Picture quality cont’d
It’s also very pleasing to note how the image’s colour saturations and contrast don’t start to seriously deteriorate until you get to a noticeably wider viewing angle than is the case with non-IPS Alpha LCD TVs.

After the Panasonic L42ET5 suffered considerable input lag thanks to that set’s use at its heart of an LG-sourced panel, it’s good to find Panasonic’s home-grown L37E5 delivering a much more gamer-friendly – and consistent – input lag measurement of just 34ms.

When it comes to handling motion, the L37E5 is solid rather than great. There’s certainly evidence of resolution loss over motion, especially during fast camera pans – and this remains visible even if you use the fairly tame Clear Cinema processing option. 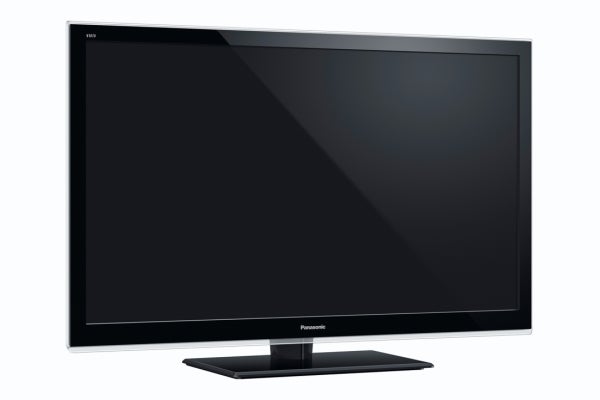 However, some degree of resolution loss is inevitable on a panel with a core 50Hz refresh rate, and actually the degree of motion softness on show here is seldom if ever seriously distracting. There’s no obvious ‘trailing’ or smearing behind moving objects either.

HD performance
If the Panasonic L37E5 has a significant flaw, it’s that its HD pictures don’t look especially sharp. There’s certainly a tangible difference between standard def and HD, but there’s no denying that the L37E5’s HD pictures don’t seem spectacularly expressive of the tiny details that really make the very best HD pictures sing.

Some of this could be down to the minor motion issues noted earlier, but it doesn’t feel as if this is the only thing going on. 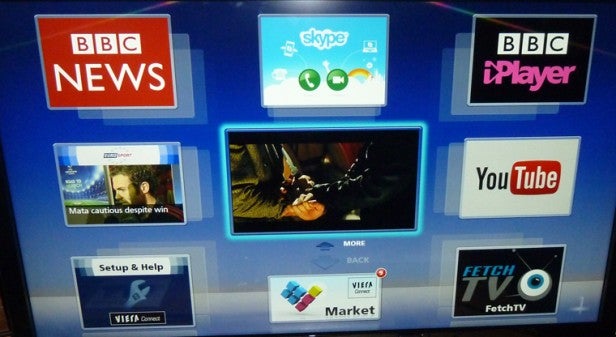 A smaller issue we noted with pictures was a tendency for the previously-reviewed Panasonic L47E5’s dynamic contrast system to cause black levels to shift a little too noticeably with particular sorts of footage, such as the contrast-rich black and white ‘prologue’ to the Daniel Craig flick Casino Royale. Fortunately, really dramatic shifts are relatively rare, but still, it might have been nice if Panasonic had provided the option to turn the dynamic contrast system off.

Turning finally to the L37E5’s sound, it’s about average. Maybe a touch better than average. Its maximum volume levels are nothing to write home about, and there’s no great precision at the treble end of the spectrum or rumble at the bass end. But for all that, the mid-range seldom sounds compressed or harsh, meaning that even action movies aren’t uncomfortable to listen to.

Verdict
While the Panasonic L37E5 in some ways merely whets our appetite for some of Panasonic’s incoming more high-end LCD and plasma TVs, it’s actually still a very likeable TV in its own right, delivering enough picture quality and features to thoroughly justify costing a bit more than your average bargain bucket 37in TV.