Well, you’ve got to admire Panasonic’s guts. For after spending a good 12 months categorically slating LG’s passive 3D technology in both technical and, um, not so technical terms, the Japanese brand has this year added passive TVs to its own range.

And we’re not talking about one or two sets apologetically stuck in the brand’s ‘small print’, either. Rather Panasonic’s new ET5 series is a five-strong collection of screen sizes ranging all the way from 32in up to 55in.

While Panasonic may have had to accept that passive 3D’s convenience and significant cost (once you’ve taken its cheap glasses into account) benefits have a fanbase, though, it kind of goes without saying that the brand has positioned its passive sets as the ‘entry level’ 3D models in its latest range, with prices starting at £600 for the 32in model going up to around £1800 for the 55in. 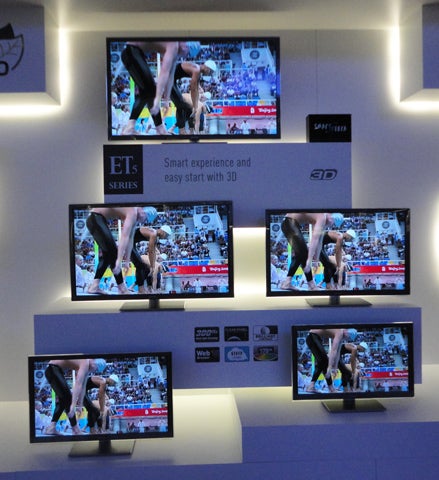 The edge LED-lit panels inside the 32, 37, 42, 47 and 55in sets are, of course, sourced from LG. But Panasonic has obviously put its own processing and operating systems in there, resulting in a claimed 300Hz motion rate (100Hz scanning plus a blinking backlight) and the inclusion of Panasonic’s Smart Viera 2012 online service, complete with a Web browser.

Panasonic’s perceived need to have an affordable 100Hz panel in its range was apparently the deciding factor in adding passive sets, for 100Hz active sets have been consistently proven not to work at all well.

Among the most significant additions to Panasonic’s online services we saw while checking out the brand’s new TVs in a recent Hamburg product launch was Netflix; a new and very useful interactive help centre; and – due to be launched soon – MySpace.

The ET5s are decently attractive TVs. They’re not ‘ultra-slim’ in the bezel department like Panasonic’s WT and DT50 LCD TVs, but they look suitably shiny and feel very well built. 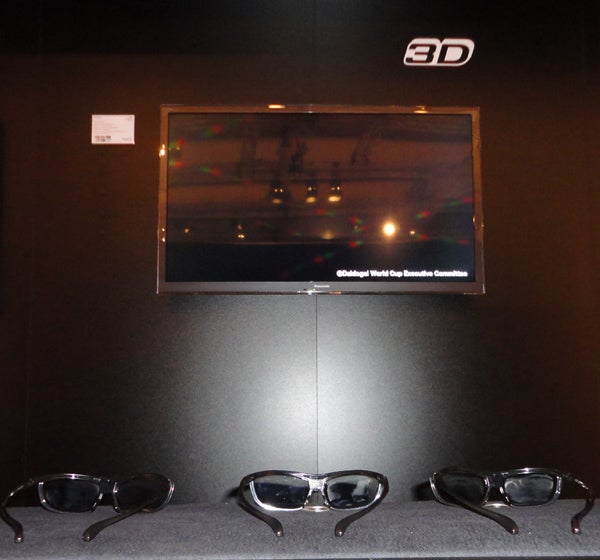 Checking out 2D pictures first on the 47in model from the ET5 range, they’re probably best described as solid. Pictures are bright, natural and clean, and under the actually reasonably dim lighting of the show floor, black level response look quite good – albeit not in the same league, of course, as Panasonic’s 2012 plasma TVs.

We did occasionally spot a slight texture to the screen if the light happened to catch it the right way, though, and as ever with passive technology, during bright scenes you can sometimes see faint horizontal line structure, caused by the polarising 3D filter applied to the screen.

In 3D mode the effects of this filter are more obvious, becoming particularly clear in the shape of ‘jaggies’ around the edges of small, bright, contoured objects. There’s also no doubt studying the 47ET5’s 3D images right alongside those of one of Panasonic’s DT50 active 3D screens that they’re neither as sharp, detailed or ‘clean’ looking. 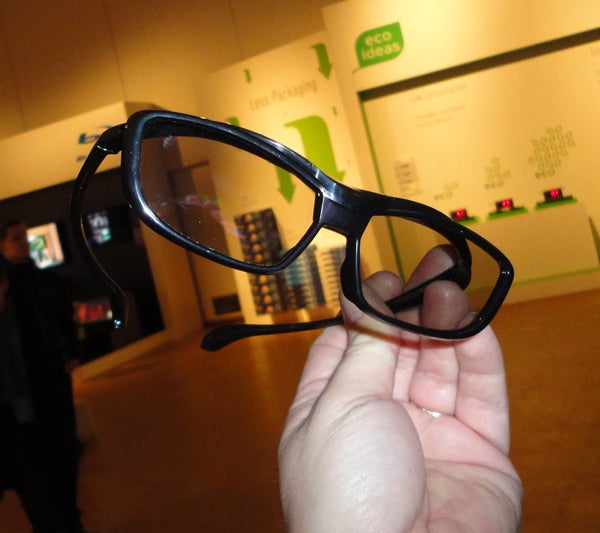 We’re not trying to ignite an unnecessary passive 3D vs active 3D debate here, though, we promise. After all, the 47ET5 also delivers on passive 3D’s advantages, shipping with four pairs of glasses included as standard (you don’t get any with Panasonic’s Active 3D screens), not suffering any 3D degradation when viewed from the sides, not suffering with any flickering even in bright ambient light, and only suffering very slightly with crosstalk (unless you watch from more than around 12 degrees above or below the screen).

What we’re saying, in other words, is what Panasonic was clearly thinking when it decided to include passive sets in its 2012 range: namely that both passive and active technologies have their own distinct advantages, and it’s up to you to choose which you prefer.

Personally we feel glad that Panasonic hasn’t let its pride stop it offering consumers a choice they clearly want, and we’re looking forward to putting the ET5 series through their paces when they start to arrive in our test rooms in March or April.