When we first pulled everything out the box, we were surrounded by metal brackets, screws, feet and mysterious bits of plastic, none of which was particularly self-explanatory. But after a quick skim of the manual it all became clear.

Ease of setup varies depending on your preferred installation option. Obviously wall-mounting takes more time and planning as you need to drive screws into the wall and hang the speakers on the brackets.

But tabletop mounting is simple – the two speakers are joined together using a metal bracket and screwed in place, while the feet and bases screw onto the speakers. Cables are kept out of sight by feeding them through little holes in the bases and brackets.

There are actually two tabletop options for horizontal placement – leg stands, which lift the bar off the surface, or support legs and speaker feet that allow it to lie flat on the surface. 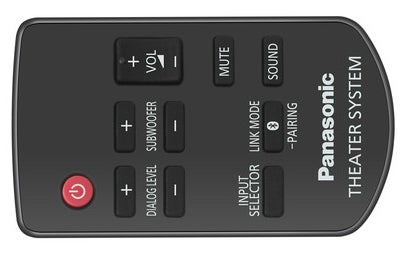 Operating the Panasonic SC-HTB570 is simple. It’s supplied with a credit card style remote with buttons to adjust the dialogue, subwoofer and main volume levels, and to toggle through inputs and sound modes. Its size makes it naturally fiddly and easy to lose down the back of the sofa, but it’s harmless enough.

A Link Mode button instigates Bluetooth pairing, which we found to be a quick and painless procedure – just hold down the button and find the Panasonic HTB570 on your device.

With no display panel or onscreen menu, it’s hard to know if certain modes are activated and even harder to turn them on and off. You have to hold down different combinations of buttons and wait for lights to blink. It’s all very clumsy and complicated – you’ll need to keep the manual close by.

If it’s a big, powerful sound you’re after, the Panasonic SC-HTB570 won’t disappoint. With The Hobbit Blu-ray passed from our OPPO player into the HDMI input, it delivers an exciting yet composed soundstage, bolstered by substantial bass and vigorous effects.

We played the Stone Giants battle (chapter 21) and were impressed by how smoothly the HTB570 handled this challenging scene. As the giants slam into each other, the blows have pleasing depth and force, leaving plenty of room in the mix for the dwarves’ terrified cries and the sound of cracking stone. There’s a nice balance and a lack of distortion in the mids and highs.

The subwoofer lends depth and body to the Goblin King’s booming voice and a provides constant throb throughout the movie. That said, it could do with a little more focus with transient effects – the best active subs dispense these with punch and rigidity; this is more of a vague rumble. Despite that, its ability to bring room-filling scale to the sound can’t be denied. 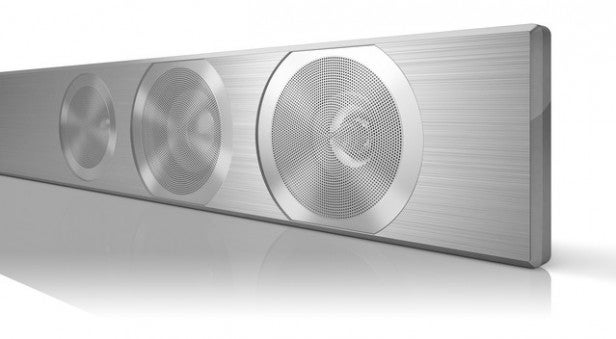 Tread carefully though – when you set the sub level any higher than 1 (it goes up to 4) it becomes too boomy and overpowering. And at the other end of the spectrum, high-frequencies could be a little more open, but overall the SC-HTB570’s sound is impressive.

We also paired an iPod Nano 7G with the SC-HTB570 and it does a decent job with music. In Stereo mode, Michael Kiwanuka’s Home Again sounds rich and full-bodied, with smooth vocals, gently pulsing bass and a crisp twang to acoustic guitars. Hi-hats aren’t quite as clear as they could be and bass is a touch flabby, but for day to day, non-critical listening it’s rather enjoyable.

With the SC-HTB570, Panasonic has hit upon a terrific idea – a 2.1-channel home cinema system that gives you the flexibility to install it as you see fit, be it a stereo pair or soundbar, on the wall or on a stand. It’s easy on the eye and boasts some tempting features, including Bluetooth, HDMI sockets and various sound modes.

And in terms of performance, its beefy, energetic sound makes for an exciting listen, despite the subwoofer’s deficiencies. A bigger gripe is the control system, which is more of a faff than it should be, but these gripes aside the Panasonic SC-HTB570 is an impressive home cinema solution.