It's rather chunky and looks a bit techy, but the Panasonic EH-NA65-K is a well-priced hairdryer. With its gentle drying action, it may not be the fastest dryer available but it lends itself well to styling, particularly given the range of accessories it ships with.

What is the Panasonic EH-NA65-K?

Considering Panasonic is a tech brand, it’s perhaps unsurprising that the EH-NA65-K is one of the most techy hairdryers we’ve tested. For a start, the name is about as catchy as Panasonic’s TV model numbers, but its Nanoe technology is what sets it apart from its competitors, promising to retain significantly more moisture in the hair than competing ionic technology.

This aims to keep hair soft and healthy, and prevent breakage by not overdrying hair at very high temperatures. It has a 2000w motor, and comes with more accessories in the box than most, offering two nozzles and a diffuser. 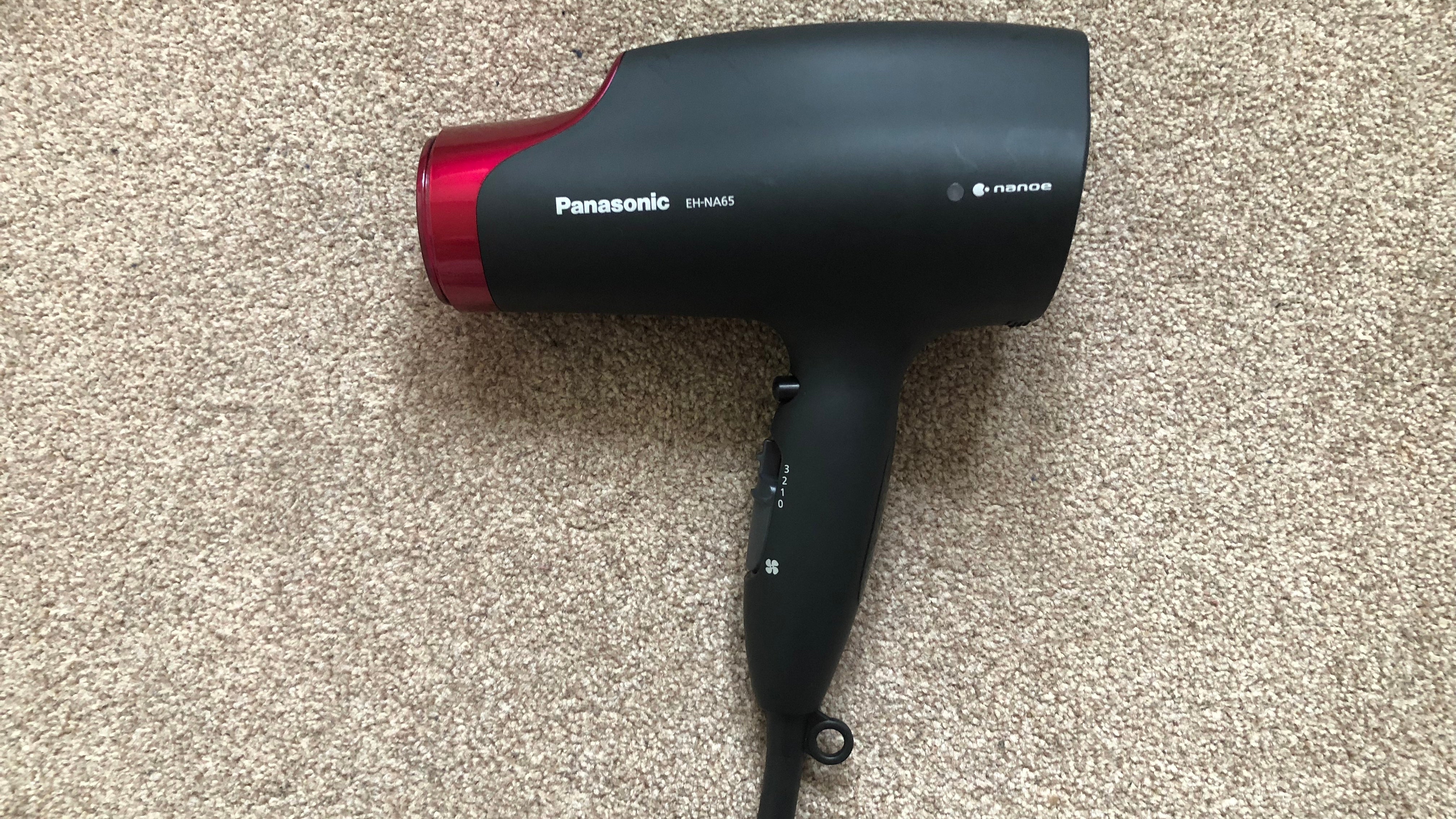 Compared to the majority of hairdryers we’ve tested, the Panasonic EH-NA65-K is big. And if we’re honest, it’s a little bit ugly too. Sure it comes in a nice contrasting colour scheme of black with pink highlights, but the Nanoe section that sits on top of the main barrel makes it look very chunky indeed, which in turn makes it feel a bit unwieldy in the hand.

It’s not heavy though, which is something. In fact at 585g, it weighs less than the likes of the Cloud Nine The Airshot and the GHD Air, while still feeling sturdy and well put-together. That means it can be used easily for longer periods of time, if you don’t find its overall size off-putting.

The EH-NA65-K has a pretty decent set of controls too, with slider switches placed on the inside of the handle and next to one another, making them easier to access one-handed than see-saw switches in the same position. They start out a little stiff, but do loosen off after use.

In total, there are four options for heat and three for speed, plus a cool shot button too. That’s more than we’re used to seeing, though the heat difference between the second and third steps is pretty minimal, and the cool shot button could be cooler too.

A 2.7m cord is generous enough for most needs, and the included accessories even more so – especially given the price you can now pick this up for. 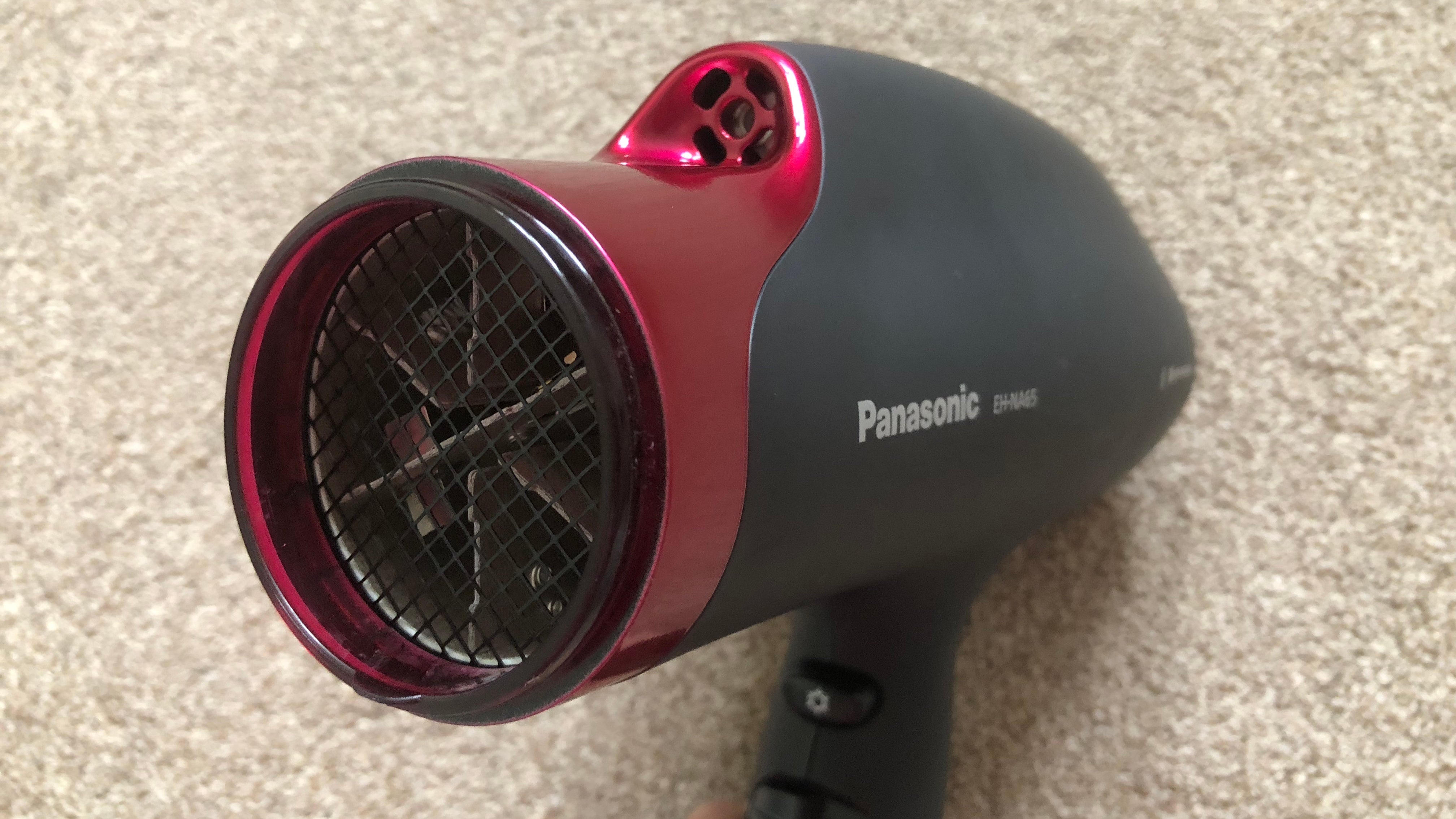 Considering the EH-NA65-K’s 2000w motor, the two minutes it took to dry our test cloth might come as a bit of a surprise. However, this dryer’s hottest setting feels much cooler than what you’ll feel on the GHD Air, and its maximum setting airflow of 16.1m/s isn’t as fast and furious either.

That’s not necessarily a bad thing. The fact the hottest temperature is usable for extended periods means this is much kinder on your hair, particularly those of you with curly locks, though of course, if you like a super-hot temperature in your arsenal for quick blow-and-go blasts, the Panasonic EH-NA65-K isn’t the best equipped to offer it.

The lower airflow will mean thicker hair struggles to dry as quickly as it would with some of the competition, too, though the Nanoe technology does to a really good job at keeping hair noticeably softer and frizz-free. It’s arguably a good trade-off for a few extra minutes of styling.

It’s relatively quiet across the board – one of the quietest in fact – maxing out at 96dB on its highest setting. That said, the hairdryer is not audibly different to the likes of the GHD Air, and in fact, has a slightly higher-pitched whirr to its motor.

The included accessories are a bit of a mixed bag in terms of performance – the diffuser is a touch on the small side for thicker hair types, I didn’t notice much difference in drying time with the so-called quick dry nozzle, and I’d like the precision nozzle to be a little more, erm, precise too – the opening is on the wide side for really focussed styling.

However, they’re nice to have included and very easy to connect and disconnect as and when you need them. Should I buy the Panasonic EH-NA65-K?

The Panasonic EH-NA65-K is great for those that want a kinder hairdryer, which might not dry the quickest, but will leave a superb result at the end of it. Hair will be softer, shinier and frizz-free, making it a particular hit for those with curly or thick hair who are most prone to this.

You’ll have to put up with its size, and it’s really not the prettiest either, but it is quiet and comes with a good selection of accessories that you can try out for yourself. At the very least, it will prevent you having to fork out extra for more.

Not the hottest or most powerful, but the Panasonic EH-NA65-K is great for keeping frizz at bay by offering a gentler drying experience.