What is the GHD Air?

GHD might be better known for its hair straighteners, but it actually covers all aspects of hair styling, with the GHD Air its entry-level at-home hairdryer.

I say entry level, but this hairdryer costs £99 – that still makes it a hell of a lot cheaper than the £300 Dyson Supersonic and on a par with the higher-end competition.

The GHD Air is a 2100w hairdryer, and packs ionic technology for controlling frizz, which GHD says come together to give a salon finish up to two times faster than a “regular consumer dryer”. Whatever that is. Like most of its products, the GHD Air really looks the part. The majority of the body is a matte black plastic, which makes it really easy to hold, but there are metallic accents to help give it a bit of flair too. Even the filter on the back has been paid attention to and looks lovely.

The hairdryer also has small, almost unnoticeable, rubber bumpers near the logo on both sides, so you don’t lay it flat and cause scratches to the body. That means that during testing, it was one of the models to pick up the least scuffs on its outer casing.

At 600g for the main body, it’s not the lightest model we’ve tested, but it is well balanced, so it doesn’t feel top heavy. 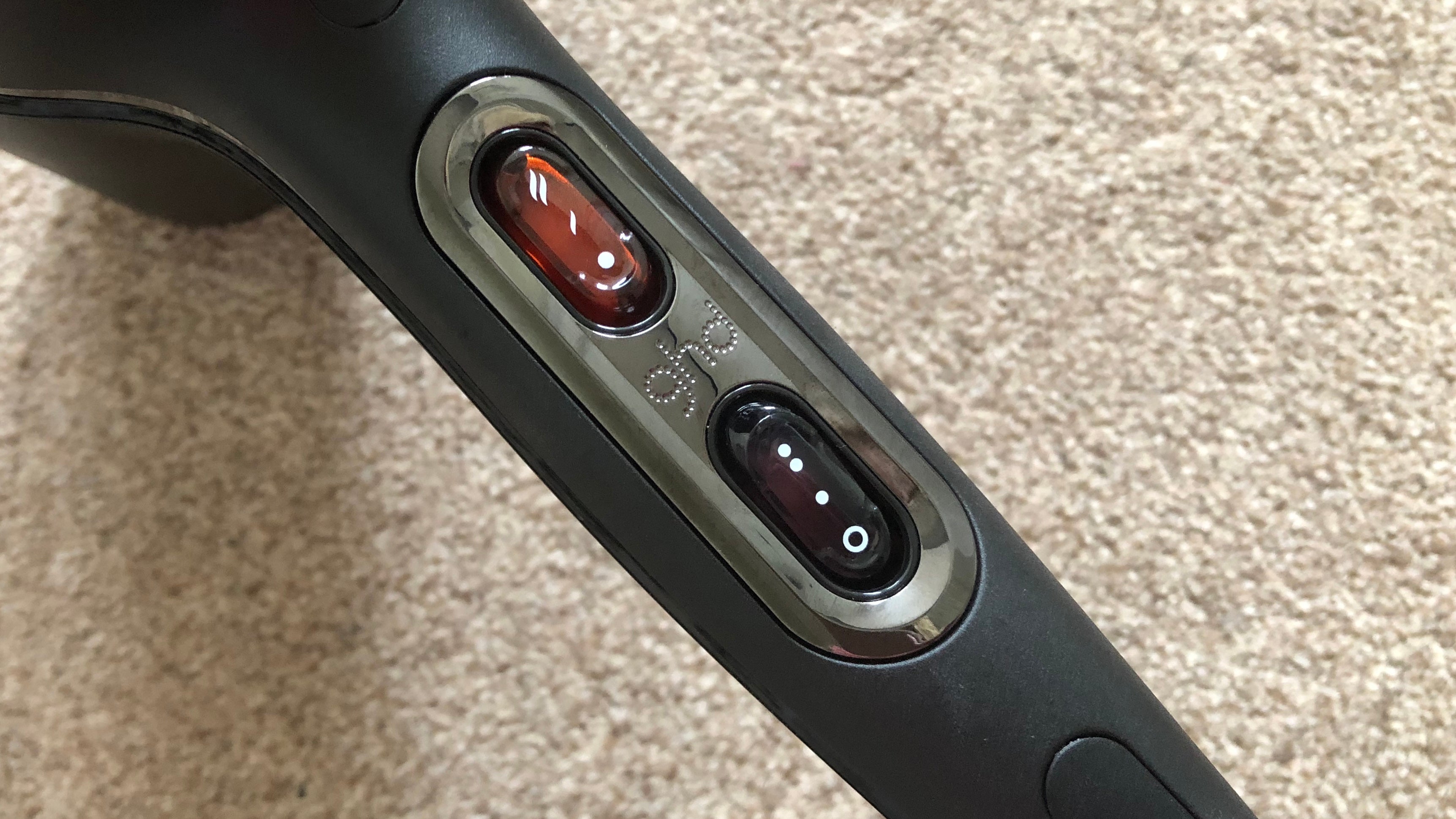 Its matte finish gives it a little more grip in the hand, too.

Two see-saw controls (three heat options, two speeds) are placed on the back of the handle, making them equally accessible for left- and right-handed users. However, they have been recessed so they sit flat to the handle when in the neutral position. It’s a very neat way of doing things, but doesn’t always make them the easiest to press down.

The cool shot button sits separately on the inside of the handle and is very large. It’s also a little on the stiff side too, meaning holding it down for more than a short period is a bit of a pain.

The cable measures in at 2.8m, so plenty long enough for most situations, and it comes with one wide styling nozzle – a diffuser is available separately should you require one (£15). 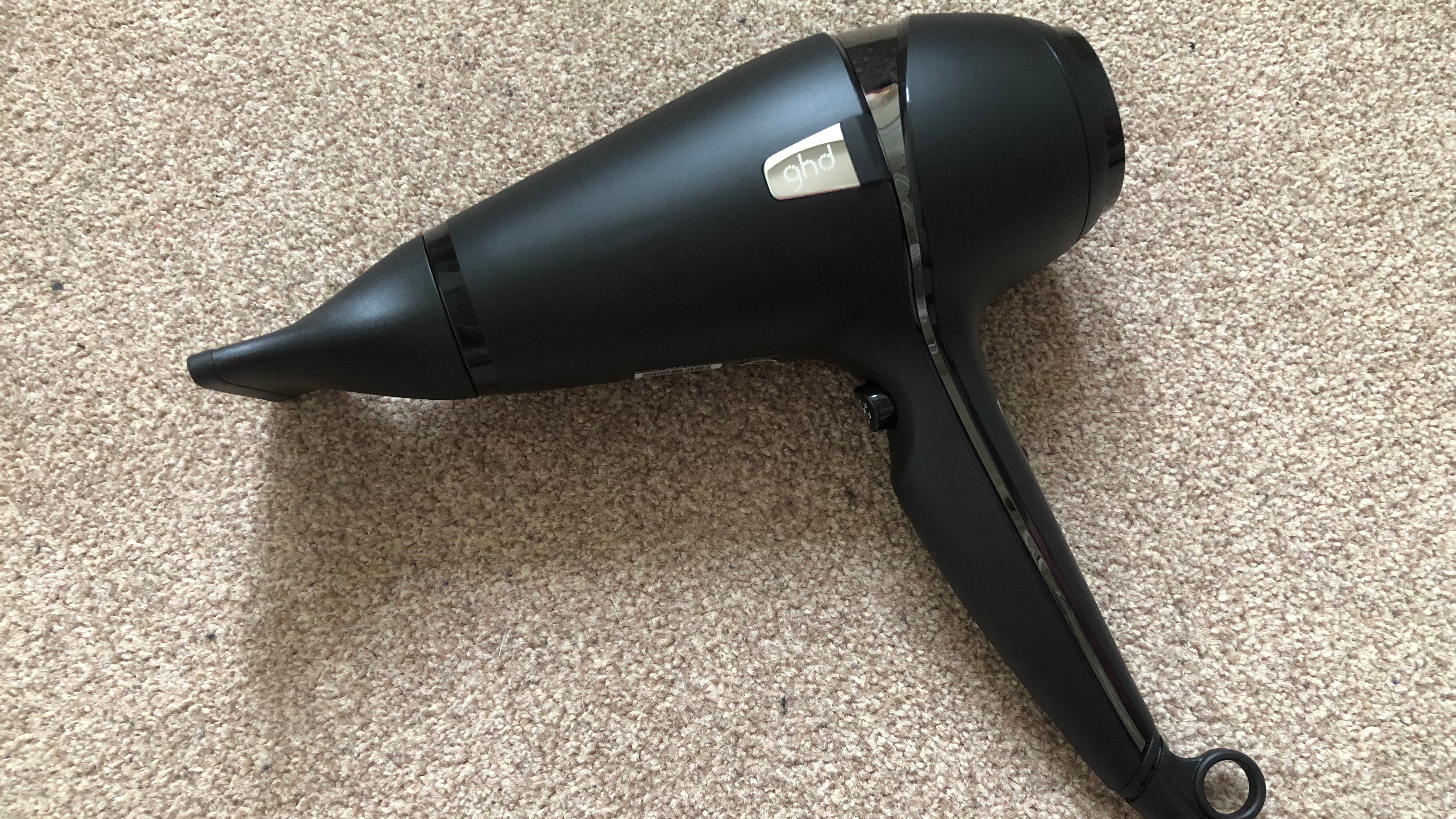 One thing is for sure – the GHD Air dries hair fast. Its 2100w motor is capable of 22.3m/s at its highest and hottest setting, which dried our test cloth out within 1 minute 30, the fastest we’ve tested yet.

That’s great if you are in a rush, but we did find the hottest setting very hot indeed, making it only really suitable for blasting the hair dry. You’ll find the medium heat is more suitable for more precise hair drying, when you aren’t moving the nozzle around so much.

It’s a little noisy, chalking up 103dB on its highest setting, but it doesn’t have a high-pitched edge to its motor sound so the GHD Air’s sound isn’t too annoying.

The included nozzle is hugely effective when it comes to styling hair. It’s wide but very slim, meaning it directs airflow very well indeed. The only niggle I had with it is that it’s very stiff to attach or remove. This might be something that eases with time, but certainly during testing, it required some real strength to get it off – annoying if you regularly want to use the dryer with and without the nozzle.

Overall, results with the GHD Air were very good indeed, and I could get a good, sleek blow-dry without much fuss. The cool shot button is pretty effective, though we’d argue it doesn’t go as cool as quickly as on some dryers. Should I buy the GHD Air?

The GHD Air is a stylish, fast-drying hairdryer that is also able to do more precision styling well too. It’s at the pricier end of the spectrum, but once again, shows exactly where the extra budget is going in its build and performance. This hairdryer is comfortable to use and relatively quiet, but its controls – though clear and well laid out – are just a little fiddly for my liking.

It certainly takes the fight to serious competition, provided those recessed controls don’t annoy you too much.

A stylish and powerful hairdryer, the GHD Air performs well across the board.