If you’re trying to cut down on clutter under your TV and want to combine the functions of a Blu-ray player and Freeview HD PVR into a single box, the Panasonic DMR-PWT520 will do the trick. It’s essentially the big brother of the DMR-PWT420 that we looked at recently. This model only costs around £30 more, but adds Wi-Fi support and a bigger 1TB hard drive.

The Panasonic DMR-PWT520 looks pretty much identical to all of Panasonic’s other hard disc recorders, including last year’s models, as the company basically uses the same chassis across all its range and just changes the innards to match the specification of the unit. 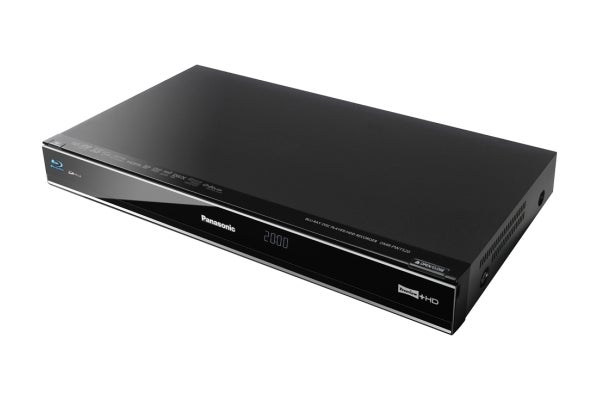 It has to be said that the design is more functional than flash. The all-black body looks pretty understated, although Panasonic has used a glossy coating on the front to make it look a bit snazzier. The Blu-ray tray is hidden behind a flip-down flap that automatically opens and closes when you eject or load a disc. This flap also has a semi transparent window on the front, so you can see the small six-character LED display through it when it’s closed. Behind the flap there’s a front mounted USB port and SD card slot to let you play back your own digital media.

There’s also another USB port on the rear, which is handy if you want to leave an external drive permanently attached to the unit. As you’d expect, the rear also houses the HDMI port along with the RF input that feeds both of the units Freeview HD tuners. There’s also an RF output so you can loop though the aerial feed back to your TV.

For audio, Panasonic provides both an optical digital out as well as a pair of stereo phono connectors. On the network front there’s an Ethernet socket provided, but unlike some of the cheaper models in the range, this one has Wi-Fi, which most people will find a more convenient option for connecting to the internet and their own home network. Unlike Panasonic’s previous generation of recorders, there’s no composite or Scart output ports on this model, which may be an issue for you if you have an ancient TV.

Twin Tuners
Given that this is a twin tuner model, you’d expect to have pretty comprehensive PVR features and thankful that’s most definitely the case. You can watch one channel while recording another or record two channels at the same time. It also supports chase play so if you get in from the shops and EastEnders is still recording you can start watching it from the beginning instead of having to wait for the recoding to finish. When two channels are being recorded you can flick between them, but unlike some other PVRs, such as the Humax twin tuner range, you can’t watch a third channel that’s on the same multiplexes as the ones being recorded. However, in reality we don’t expect many people would really use this features much anyway.

It has been a while coming, but Panasonic has finally gotten around to redesigning the EPG that it’s using on its PVRs. The new one found on this model is a massive improvement. The older web-style advert placeholders have been removed and a new video thumbnail window has been added. The result is a much cleaner and tidier looking EPG that’s easier to navigate. 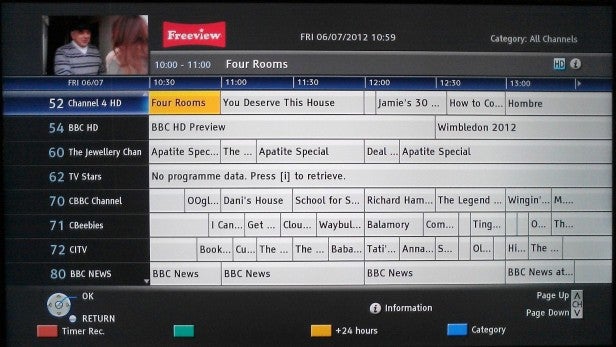 Setting up recordings are also thankfully very straightforward as all you’ve really have to do is select the program in the EPG and tap the OK button to create a timer. If the show is part of a series you’re immediately given the option to choose either to record a single episode or have the recorder catch all of the episodes in the series. You can adjust the start and end times of a recording too, to pad it out in case you think it’s likely to start early or finish late – handy for sports that might over run – although you might be better off missing out the end if its an over running England match.

This model has a sizeable 1TB hard drive, so even if you only ever record HD shows you’ll still get around 229 hours of recording from it, or if you just fill it with standard definition recordings that figure jumps to around 518 hours – enough for even hardened telly addicts.

The Panasonic DMR-PWT520 comes with the company’s Viera Connect smart TV platform. Unlike the PWT420, this does include Skype, however to make use of it you need to shell out extra for the optional camera accessory. This is rather pricey at around £150. Other services that you can access include BBC iPlayer, Netflix, AceTrax and Viewster. There are also apps for Twitter and Facebook as well as news and information services such as Euronews, AP and Accuweather.  The remote has dedicated buttons to directly launch the Skype and Netflix apps without having to enter the main Viera Connect menu, which is handy. 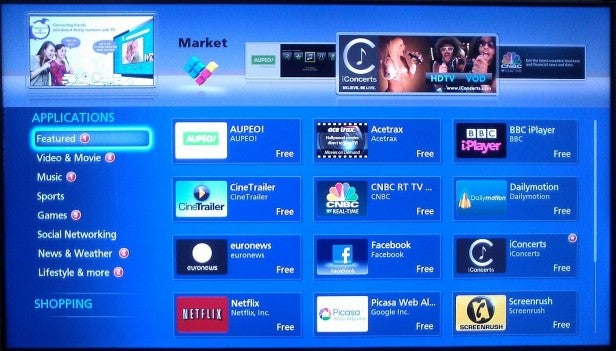 The line up of services is good, although it’s disappointing that it does included LoveFilm alongside Netflix. Also, the Viera Connect interface can feels a bit sluggish to use and the apps take a while to launch. It’s worth noting that you can’t use the intent features when a recording is in progress either. So you can’t record something on TV while watching a movie via Netflix, for example. 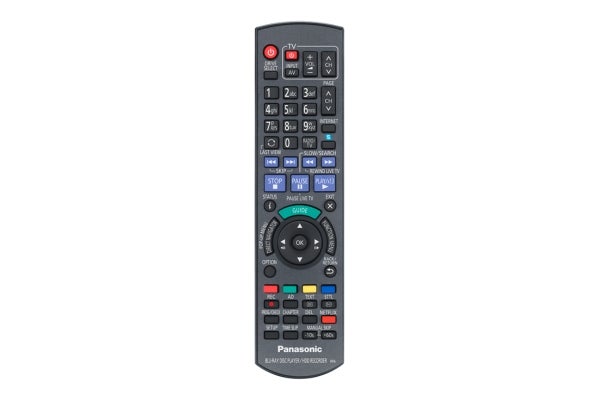 Digital media playback
The Panasonic DMR-PWT520 can also act as a digital media player allowing you to play files either locally from USB hard drives or memory keys, optical discs and SD cards, or alternatively to stream content from a DLNA server. Format support for playing files locally is pretty good. It worked with WMV, MP4 , Divx and MKV files we tried via USB. However, when it comes to streaming across a network it only seemed to work with MP4 files, which is annoying, especially as many other recorders now support streaming for formats like MKV. This is an area that Panasonic definitely needs to improve.

Cleverly, though, the recorder can act as its own DLNA server so you can share recording stored on its hard drive with other Panasonic TVs and DLNA media streamers. It works well with Panasonic’s own TVs, but we found only some recordings were playable via a Sony PlayStation 3, so it certainly won’t work with all DLNA media devices.

On the Blu-ray side, the player is 3D compatible so it supports the latest 3D discs, as well as standard Blu-rays. It doesn’t have 2D-to-3D conversion, though, unlike some competing models. However, we’ve never really been that convinced by the results that these systems produce. BD-live is supported, so if you connect the player to the internet you can access extra downloadable content and store it on the recorder’s onboard memory. Disc load speeds are pretty average though. With the X-Men Origins BD-live disc it took one minute and 13 seconds to pull in the disc and get to the main menu screen.

Picture quality
Nevertheless, picture quality is excellent both for recordings and Blu-ray playback. Colours look warm and natural and it delivers pleasing levels of contrast and smooth motion. It’s also good at teasing out finer detail in more tricky material, and even standard definition broadcasts are quite nicely upscaled to HD without adding in lots of extra picture noise in the process. 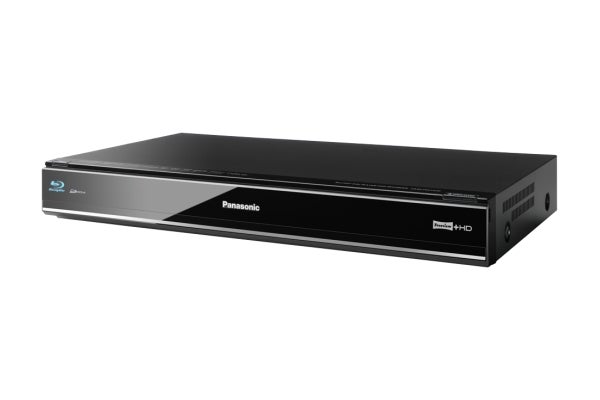 Where the recorder is found a bit wanting is in its user interface. The presentation is very dull compared to models from LG and Samsung, and navigation is needlessly complicated. There are multiple ways to change the various picture options, for example, and you’ll have to delve into the manual to work out how to set up some of its networking features.

Verdict
The Panasonic DMR-PWT520 is a featured packed device that does a good job of combining Freeview PVR functionality and 3D blu-ray playback in a single device. It works reliably and offers great picture quality. Its support for internet service is quite good too. However, streaming media support lags behind the competition and its menu system looks dull and can be a tad confusing to use.