It’s fair to say that 3D is no longer the big deal it once was in the AV world. But there were still a few interesting 3D tidbits tucked in various corners of some manufacturers’ IFA 2012 stands in Berlin if you took the time to seek them out.

One such tidbit was Panasonic’s 103-inch glasses-free 3D display. Yes, we know that describing a 103-inch display as a ‘tidbit’ is a stretch. But as a testament to the size of Panasonic’s IFA stand, it was entirely possible to miss the 3D monster thanks to the way it was tucked around a dark corner in an obscurely labelled ‘Advanced Technology’ zone.

Tricky glasses-free start
Anyone who’s read our review of the Toshiba 55ZL2 TV, the first commercially available product to offer 3D without glasses, will know that its 3D efforts could hardly be considered an unqualified success. Despite the panel using a 4K resolution to try and boost the glasses-free 3D image quality. 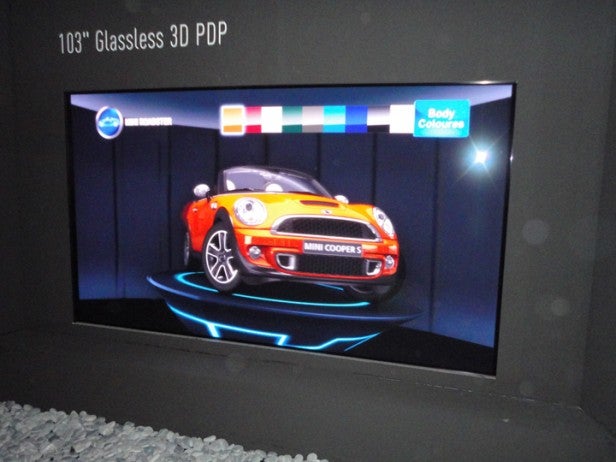 But Panasonic’s 103-inch beast – which is set to launch through Panasonic’s Professional division in the coming months – does at least renew some hope that a satisfying glasses-less 3D solution for the home might one day be possible.

All about the resolution
Sensibly, given its unforgiving enormity and the fact that like the Toshiba 55ZL2 it uses a series of lenticular lenses on its screen to produce its 3D images, Panasonic’s new 103-inch glasses-free 3D TV uses a 4K resolution. What’s surprising, though, is how much more sharp and detailed its spectacles omitting 3D images look compared with the efforts of the Toshiba. Even though you would have expected the Panasonic’s extra size – it’s nearly twice as big as the 55ZL2 after all – to have left glassless 3D images looking softer rather than crisper.

It’s great to see, too, that the image’s sharpness doesn’t take a dive when there’s lots of motion in the picture. This is doubtless down in no small part to plasma’s innate motion clarity advantages. Plasma tends to have an innate disadvantage versus LCD, though, when it comes to brightness.

Better brightness than expected
Thankfully, though, this disadvantage isn’t as obvious on this glasses-less 3D Panasonic model as we might have expected, as the admittedly rather basic demo footage – a cartoon T-Rex stomping around an exhibition and some footage of a CGI car – actually looks reasonably punchy. Presumably the lenticular filters on the screen don’t introduce any heavy duty light filtering as they go about their stereoscopic 3D business. 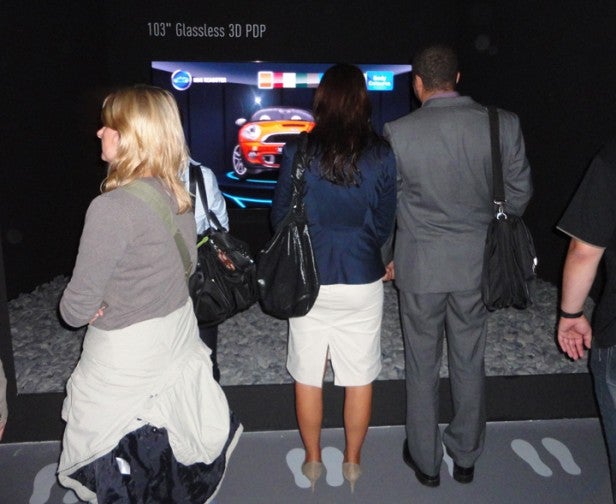 The extra sharpness, improved motion handling and impressive brightness levels all combine to make Panasonic’s 103-inch behemoth a much more convincing glasses-free 3D proposition than the Toshiba’s 55ZL2 was. The sheer size of the thing helps too, given that 3D is essentially an immersive format that always works best the more it dominates your field of view.

Honeycomb effect
The screen certainly isn’t flawless in its glasses-free 3D role, though. First, the extra size of Panasonic’s screen revealed quite clear evidence of the structure of the lenticular filters. This appears as a sort of honeycomb effect over bright parts of the picture. The honeycomb structure is quite small to be fair, but it’s certainly visible.

The other issue is to do with viewing angles. As shown in the accompanying photo, Panasonic had gone to the trouble of painting footprints on the floor so that potential viewers knew where to stand in order to get the best 3D effect. Six different viewing zones were supported, but standing even slightly off the footprints certainly did reduce the quality of the experience, introducing such issues as visible ‘seams’ in the picture and a fairly severe loss of focus and sharpness. 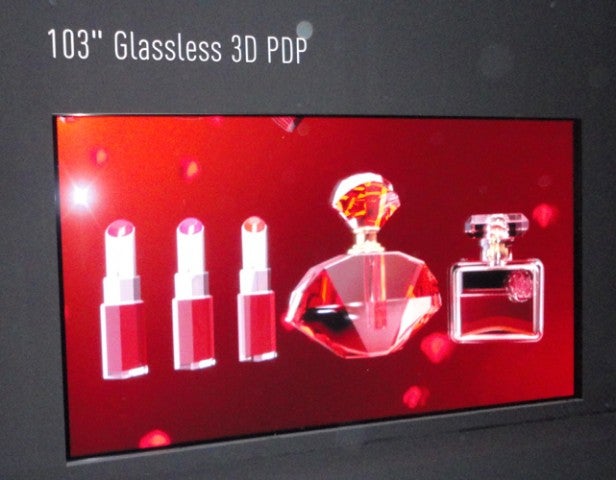 These issues also affect the picture if you move your head much – even just an inch or two – while watching from one of the designated ‘sweet spots’. And actually the picture struggled to retain its sharpness uniformly right across the screen even if you’re on one of the footprint hotspots and you keep your head still. Certainly objects in the mid to deep background looked soft and ‘ghosty’ on a pretty routine basis.

Still conflicted
Overall, Panasonic’s new 103-inch screen still leaves us conflicted about glasses-free 3D technology. Yes it makes us feel more positive toward it than the Toshiba 55ZL2’s efforts, thanks to its greater sharpness and its freedom from the wavy line interference that afflicted our 55ZL2 test sample. But the Panasonic’s issues with focus consistency, over-demanding viewing positions and visible lens structure still make us wonder if glasses-free technology will ever be good enough to satisfy the sort of AV enthusiast likely to spend the big money currently required to get their hands on it.