It’s a single-box speaker system designed to sit beneath a TV and provide an immersive listening experience using Orbitsound’s patented airSOUND technology (the new name for Spatial Stereo). It’s like a soundbar, except that you can actually place your TV on top of it, creating a tidy, space-saving AV system.

Orbitsound SB60 airSOUND Base not for you? Check out our round-up of the best soundbars to buy.

Better still, bass is boosted by a built-in subwoofer, which takes even more boxes and cables out of the equation. We were impressed by the Orbitsound T9 and Orbitsound M9 series soundbars, so we’re hoping this intriguing proposition can continue the company’s fine run of form.

One of the things that impressed us most about Orbitsound’s soundbars is their superb build quality, and thankfully that continues with the SB60. It’s a beautifully made and immensely stylish product. As you’d expect from a unit designed to support a TV, the cabinet is incredibly sturdy, having been crafted from no fewer than 20 pieces of engineered wood. It’s topped off by a high-gloss piano black finish, which curves elegantly around the edges.

The cabinet measures 600mm wide, which is narrower than most soundbars, and 300mm deep. Although the unit will support most TVs up to 55in, it does depend on the shape of its stand and whether it fits within the top surface – some TVs, for example, have a curved stand that overhangs the edges and isn’t 100 per cent stable. But most sets between 32 and 42-inches can be comfortably accommodated, and there are four rubber feet on the bottom to help absorb vibration.

The other thing that makes the SB60 such a visual triumph is the lack of front panel clutter, allowing it to blend in with most other kit. Cleverly, the front speaker grille can be removed and replaced to suit the styling of your TV. Both black and silver grilles are supplied, and because they’re magnetic you can snap them on and off in seconds. 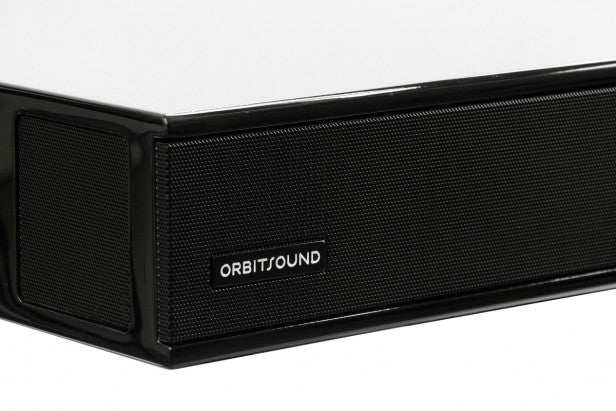 However, this minimal look is at the expense of a front panel display, which does make it harder to gauge volume levels and selected inputs than other soundbars. All you get is a blue LED on the right-hand side that flashes when it receives a command. Remove the grille and the LED, IR sensor and drivers look a bit like a DIY electronics project, so we recommend leaving them covered.

On the back is a simple selection of sockets, including an optical digital input, stereo RCA inputs and a 3.5mm minijack input, alongside a volume dial that doubles up as a button for input selection and standby. Putting this on the back is a good idea as it keeps the front panel completely clear.

There are no HDMI inputs, which means you can’t pass sound and pictures from a Blu-ray deck through the SB60, but with no on-board decoding for any Dolby or DTS formats there would be little point, apart from HDMI switching.

The SB60 is conceived as a more straightforward sound hub – simply connect it to your TV with an optical cable, and it’ll play whatever you’re watching whether that’s Freeview or Blu-ray, but be sure to set your TV’s output to PCM. Alternatively, you could feed sound from your TV into the analogue inputs (both optical and RCA-to-minijack cables come in the box).

The RCA inputs are useful for connecting other audio hardware, while the minijack allows quick, simple connection of MP3 players and other mobile music players. The SB60 is also ready for Bluetooth, but sadly it’s not built-in – you’ll need to buy an optional dongle for £30.

The SB60’s simple approach is reflected in its low-key spec sheet. The on-board amp and sub muster a claimed 200W of power, with sound being delivered by two 2in front drivers, a 5in down-firing subwoofer and two independently sealed 2in side-firing drivers. These side drivers are key to airSOUND, as they create an ‘infinite sweet spot’ that aims to give you the same sound quality wherever you sit in the room.

Unusually, there are no EQ sound modes or virtual surround processing, such is Orbitsound’s confidence in the quality of airSOUND stereo. However, you can adjust the bass and treble levels to taste.