Installation is a cinch thanks to the single-cable connection to a TV – it’s the essence of plug and play. The integrated sub means there’s only one component to plug into the mains too. This level of setup simplicity should win the SB60 plenty of fans.

Operation is rudimentary although that’ll probably go down well with many people. To switch between the three inputs you press ‘Source’ on the remote or the button on the back – the blue LED blinks once. When adjusting the volume, bass or treble, it blinks three times. It stops blinking once it’s reached maximum. With no numbers to refer to, any tweaking has to be done by ear alone.

The remote is the same one that accompanies previous Orbitsound products like the M12 and M9, and that’s not great news. The buttons feel cheap and plasticky, plus the direction keys and playback controls are designed for Orbitsound’s iPod docks and therefore have no use here. However, the SB60 responds immediately to remote commands.

The SB60 deserves plaudits for doing exactly what it says on the tin, namely delivering the sort of powerful and immersive sound that you simply don’t get from a flatpanel TV. As we found on previous Orbitsound products, airSOUND works brilliantly, filling the room with satisfyingly fulsome audio no matter where you are in relation to the speakers. 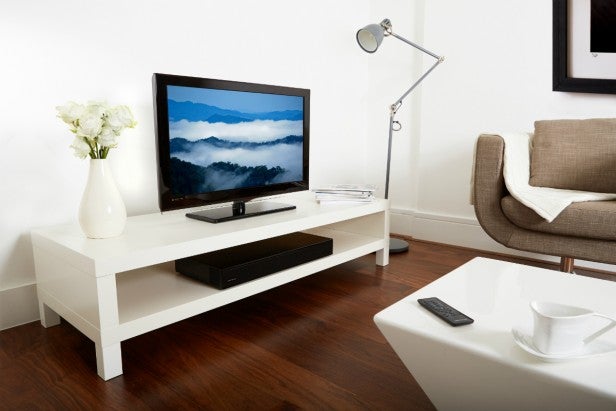 But unlike its predecessors, the sound is marred by overly aggressive upper-mid and high frequencies that make frenetic action scenes sound slightly brash, particularly when you turn the volume up high. During Lord of the Rings: The Return of the King on Blu-ray, forceful noises like the eerie hissing when Pippin looks into Sauron’s eye, or the screech of the Witch-King’s Fellbeast as the gates of Mordor open, are a little strident.

Turning the treble level down helps, but it doesn’t eradicate the hard edge completely, plus you run the risk of flattening the natural snap and vigour of the sound. 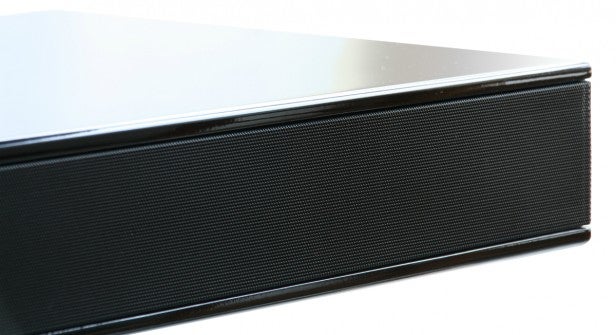 However, this doesn’t completely spoil an otherwise impressive performance. If nothing else, its tendency to lean towards brightness makes for an exciting listen (if not always a comfortable one) and for a stereo speaker the SB60 also displays a remarkable appreciation of scale, making the epic Battle of Pelennor Fields feel big and dramatic, as well as spreading its effects far and wide. Dialogue also finds its way through the melee.

As the tusked elephants lumber into shot, you get a feel for their size and heft, while the chanting and battle cries of the amassed armies reverberate around the room. This is thanks in no small part to the SB60’s other secret weapon – the integrated subwoofer. Its bass notes are tight and solid and there’s very little overhang. Perhaps a little more punch wouldn’t go amiss, but Orbitsound has done a great job of packing such an effective sub into the SB60’s slim frame.

We played music through the 3.5mm minijack from an iPod and the results are pleasing. Music sounds crisp and well balanced, the sub lends weight to basslines and vocals sound smooth. High frequencies are also sweet, displaying none of the sharpness that blights movie playback.

If you’ve been promised a sound system on the proviso that clutter must be kept to a minimum, then the SB60 is the perfect proposition. Because your TV sits on top, it theoretically takes up even less room than a regular soundbar, which is ideal in households where convenience and minimalism is a priority.

It’s beautifully made, elegantly styled and simple to install. The only real downsides are the poor remote and a slightly brash edge to certain sounds at loud volumes, which means it’s not as smooth a listen as the Philips HTL5120 or even the Roth BAR3. There’s enough dynamism, depth and clarity to hold your interest, and airSOUND does a brilliant job of creating a sweet spot that everyone in the room can enjoy.

Flawed in places, Orbitsound’s clever speaker is the perfect solution for those who want exciting sound without the clutter.

Orbitsound SB60 airSOUND Base not for you? Check out our round-up of the best soundbars to buy.