UPDATE: February 2014 – Orbitsound has updated the remote control that comes with the M12. Scroll down for a closer look.

Your home hi-fi still has wires? Come on, get with the program, it’s 2013 not 1983! Yes indeed, with every month that passes, more and more speaker makers are migrating towards producing mainly wireless systems. The Orbitsound M12 is the latest example of this trend and comes in two parts – a soundbar and an active subwoofer, both of which benefit from wireless connectivity.

Orbitsound M12 soundbar not for you? Check out our round up of the best soundbars to buy 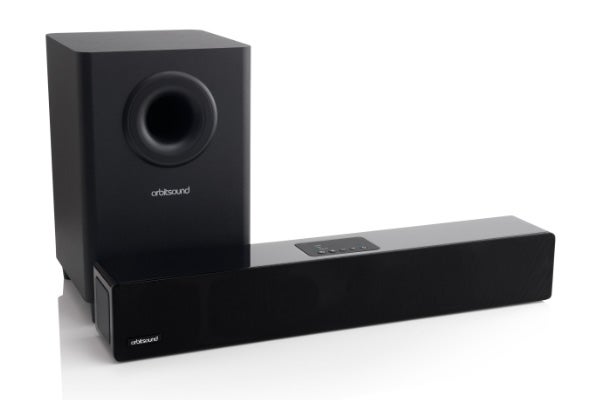 And how does it all work? Well, the soundbar features a built-in Bluetooth receiver that
allows the Orbitsound M12 to receive a signal from your smartphone, tablet or similar digital device,
while the subwoofer communicates with the bar over 2.4GHz wireless. In
fact, the only wires you’ll need with this system are the power cables.

This wireless element makes the Orbitsound M12 particularly lounge-friendly. At 30cm high the subwoofer is relatively small and can be placed discreetly out of view, plus you can stream music to the M12 from a smartphone without having to sacrifice doing other things with the device.

While you do get wireless connectivity, the Orbitsound M12 dispenses with the traditional dock that’s found on the company’s T-series. To be honest though, given the current iDevice transition between 30-pin connectors and Lightning ports, wireless seems like a safer option.

Should you prefer to go down a more traditional wired route then the Orbitsound M12 does offer some options. On the rear of the soundbar you’ll find a and 3.5mm audio jack, plus optical and phono audio inputs. This basically gives you the opportunity to hook the Orbitsound M12 up to your TV as well as your phone. 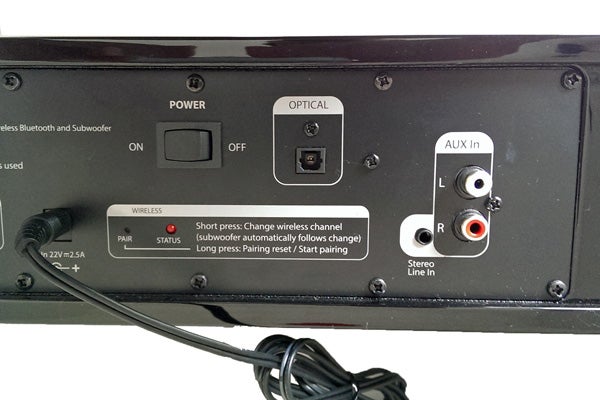 You can switch between Bluetooth and these three channels using the plain-looking control panel on top of the soundbar, or indeed the remote. It’s hardly the classiest remote control in the world, with a glossy finish and plasticky feel, however it does give quick access to EQ as well as the channel selection. 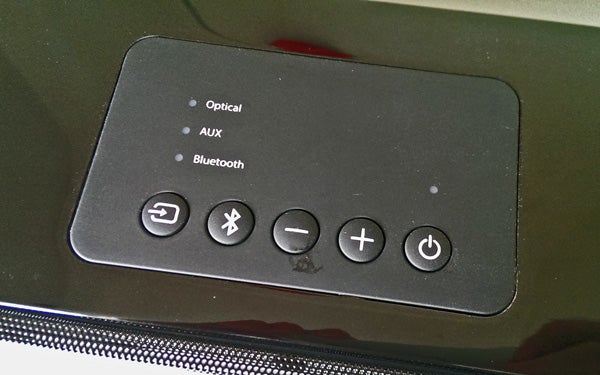 The Orbitsound M12 doesn’t try too hard to differentiate itself with its design. Its soundbar is, and wants to be, a fairly anonymous black box. If a soundbar dominates a room like a Bowers & Wilkins Zeppelin Air, it’s probably not doing its job very well. 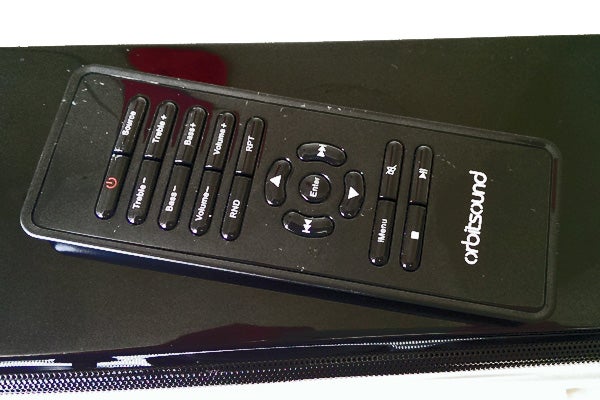 However, as of February 2014, Orbitsound is going to package a new remote with the M12 that offers a more ergonomically-pleasing layout and slightly better build quality. Glossy, dust-attracting plastic has been replaced with matt plastic and the button arrangement looks like a solid improvement. It’s also slimmer and lighter. Here’s what it looks like: 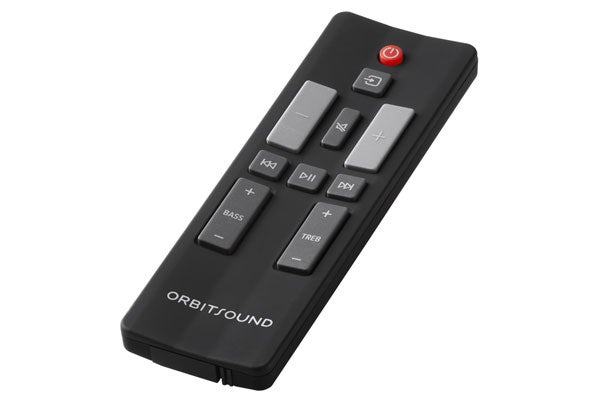 Both main parts of the Orbitsound M12 feel a little lightweight, but raise no build quality concerns. We particularly like the magnetised soundbar grille. In fact we’d advise keeping this attached, as the paper cones and guileless driver housings underneath aren’t exactly pretty – the grille is clearly there for its aesthetic benefit as well as to protect the cones. 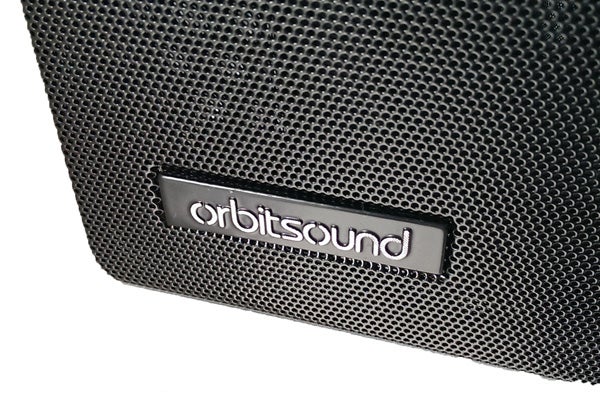 Although the Orbitsound M12 does not try to use DSP to emulate surround sound, and doesn’t start bouncing the sound off walls for the same effect, it does do some clever things. They relate to creating a stereo effect rather than a surround one, though.

Here’s the problem – unless left and right speakers are set far enough apart from your head, it’s near-impossible to create convincing stereo. To combat this, Orbitsound plays the science card.

On the front of the soundbar you’ll find four 2.5-inch drivers and two 2-inch tweeters. This array pumps out mono sound or – to put it another way – both the left and right channel at once.

The stereo effects are supplied by the 2-inch drivers that sit on each end of the rectangular bar. Each pumps out an out-of-phase signal containing the stereo information that so far has only been relayed in mono – effectively trying to create extreme left and right channels and a soundstage far bigger than the Orbitsound M12 itself. 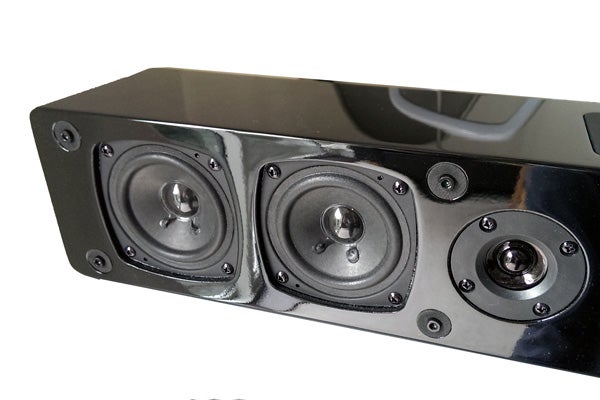 It works reasonably well and is capable of creating the impression that the sound is coming from either side of the bar rather than just its front. It also provides much greater sound dispersal than you’d otherwise get from just the front-firing drivers and the subwoofer. However, there’s still a sweet spot position to contend with here – which we think may be down to the central positioning of the two front tweeters.

Listened to at low to medium volumes, the Orbitsound M12 sounds impressive, with a well-resolved mid-range, decent detail and far better bass body than most non-subwoofer soundbars could achieve.

However, integration between the soundbar and sub are less than perfect – not in terms of timing, but rather in terms of tone. The tiny drivers of the soundbar don’t handle the lower-mid range particularly well, while the top-end lacks sparkle. This duality of problems isn’t good news for vocals, which can lack definition and sound a little lost in mixes. Plus there’s an untended patch of audio between where the sub stops and the soundbar starts, in frequency terms. 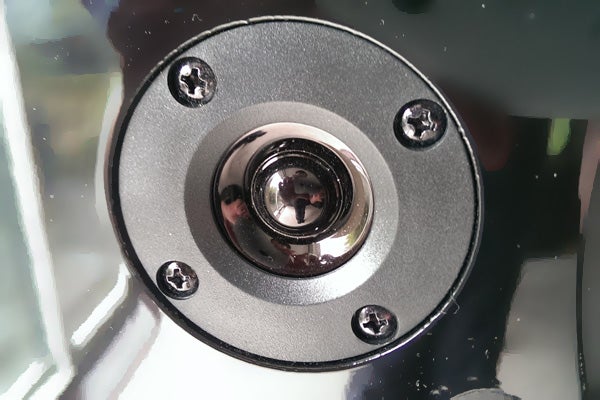 The subwoofer also lacks a little authority compared to a proper home cinema sub, failing to dole-out the lowest frequencies convincingly. That said, it’s far less sloppy than the passive subwoofers bundled with low-end 5.1 systems. You can only expect so much from a 6.5-inch driver when most dedicated subwoofers use drivers of at least eight inches.

This isn’t a speaker for those who are utterly obsessed with sound, but rather for people who like music and films but don’t want to sacrifice their lounge for the privilege of hearing them. With good overall sound quality and great flexibility, it succeeds in these aims.

The Orbitsound M12 is, like any convenience or style-oriented product, a creature of compromise. It can spew out audio wide enough, but dinky paper drivers can leave the meat of the central channel feeling unloved. However, it is damnably convenient, sounds larger than it looks and is more than happy to take on dual roles as both a mobile phone MP3 sound system and as a TV sound bar.

A great blend of the simple and the complex, the Orbitsound M12 is a doddle to set up, leaves almost no wires trailing around the floor and provides good-quality sound that is larger than the black soundbar looks. We have some reservations about audio quality that stop it from becoming a true bargain, but if you want something to double as a TV sound bar and a wireless speaker, you can do much, much worse.