My first impressions of the
HD91+ in action were a little mixed. On the upside, the impact of the
extra lumens and contrast is remarkable. In place of the rather flat,
limited contrast images of the original HD91, you now get impressively
dynamic pictures that genuinely pop off the screen. This is especially
apparent now that there’s a winningly natural and deep black-level
response against which bright areas and rich colours are able to
juxtapose themselves to great effect.

The only problem is that
the HD91+’s most dynamic, engaging results require you to use the
Dynamic Black feature. Yet if you use this feature on its most powerful
two settings, it causes so much distracting light shifting that it can
leave some movie scenes pretty much unwatchable.

The
issue seems to be that Optoma’s processing takes way too long to make
its luminance adjustments – something Optoma tells me is deliberate,
since it wants the system to be considered rather then just reactionary
in its calculations about when to shift the light level.

In
reality, however, this considered approach just doesn’t work effectively
at all for content that contains anything but action. Which is a pity,
since the Dynamic Black 2 and 3 settings do deliver easily the most
punchy pictures.

Turning off all the Dynamic Black processing and
manually selecting an “LED Brightness” value instantly removes all
traces of the distracting brightness shifting, but also substantially
reduces the image’s contrast. White peaks and bold colours look less
punchy, and black picture areas take on a greyer appearance – especially
if you push the LED brightness above its 60% level.

Keep the
LED brightness set low enough and you can still enjoy very
filmic-looking images in a dark room. However, once you’ve experienced
the extra dynamics achieved with the Dynamic Black tool engaged, you
can’t help but feel a little cheated by having to flatten things out
with the manual LED brightness setting.

Fortunately, the day is
just about saved by Optoma’s Dynamic Black 1 setting, which tones down
the dynamic contrast effect considerably. This means that while you
don’t get the deep black levels achieved with the higher settings, you
do at least get predominantly stable images that nonetheless contain
enough black and colour vibrancy to make them worth £3,500.

Also
notable is the HD91+’s sharpness and detail. I’d go so far as to say I
haven’t seen any other non-4K, sub-£5,000 projector deliver pictures
with so much precision, texture and clarity. The HD91+ does full justice
to the phenomenal amount of detail contained in the Blu-ray of Oblivion
– and it does this, moreover, without exaggerating source noise,
over-stressing object edges or introducing excessive grittiness into
high-detail picture areas. Even if you engage the Ultra Resolution
feature.

On occasion there’s evidence of moiré noise over
particularly tricky areas of detail, such as checked shirts or patterned
ties. But as mentioned, this issue crops up very rarely, and when it does
it’s subtle enough not to count as a major problem. 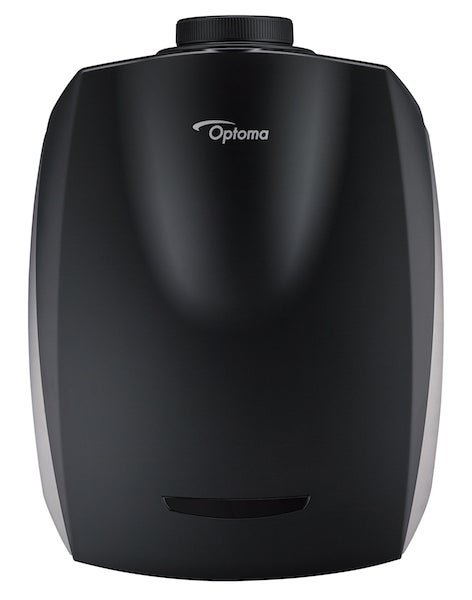 HD91 Plus also deserves huge credit for its colour performance. Tones look
more vibrant than they did on the first HD91,
and much more convincingly natural and balanced – at least once you’re
rid of the initial slight infusion of pink during dark scenes. The
slightly green flavour to skin tones sometimes seen on the HD91 has
almost completely gone now, only slipping momentarily back
into view during particularly extreme light-level shifts while using the
Dynamic Black modes.

It’s great to find, too, that there’s
comfortably enough subtlety in the HD91+’s colour handling to keep up
with the exceptional detail response, meaning you don’t see any issues
with banding, colour blocking or plasticky skin tones.

Add into
the mix some excellent motion handling by DLP standards – which can be
enhanced with some sources by the lowest power level of Optoma’s
surprisingly effective PureMotion processing – and you end up with
pictures that are seriously beautiful and always genuinely
cinematic.

Previous
Optoma HD91 Plus Review Next
3D and Conclusions Review