What is the Optoma HD27?

If you thought you had to budget big for a 1080p gaming and movie projector, think again. As 4K (and faux-4K) models take top billing, regular HD models are getting cheaper, and better, than ever.

Optoma’s single-chip DLP HD27 is a case in point. In a dark room, this compact beamer could well be mistaken for a mid-range starlet, but it sells for just £550. As an alternative to a giant LED LCD TV, it’s quite the temptress.

Weighing a mere 2.5kg and measuring only 298 x 230 x 96.5mm, the HD27 is small enough to store in a cupboard or sock drawer until needed for a night of competitive Rocket League or a big-screen movie.

It looks eminently presentable. The glossy white chassis has gentle curves and is heavily ventilated. While there’s a keypad on top with full menu access, it ships with a little backlight IR zapper that does everything you need.

Connections include two v1.4a HDMI inputs, one of which supports MHL smartphone hook-up. There’s also a USB port for device charging but not media playback. If you want to mount the projector on the ceiling, there’s even a 12v trigger to control an electric screen. The HD27 also works with Optoma’s WHD200 wireless HDMI streamer, if cable runs are a problem.

That small, heavily vented chassis does come at a cost, though. Like so many other small-form-factor projectors, fan noise is quite high. Keep the lamp on its Eco setting to prevent the HD27 going full turbo. At best, it maintains a 26dB whir. 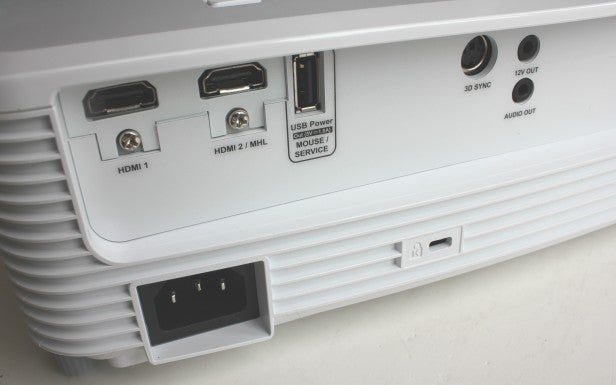 Getting up and running takes no time at all. Zoom and focus are entirely manual; a simple lever is used to max out image size, while the serrated focus ring keeps things sharp. Built-in test patterns help with the fine tuning. If you’re using a wonky table, the feet are adjustable.

Like so many other budget projectors, there’s a mono sound system built in. This could be construed as a plus point – it means you can simply plug and play with your content sources. But, in reality, the audio is so painful that you’ll quickly want to lace up something better. Optoma boasts that there’s a 10W amplifier on board, but if you can listen to it at anything louder than a quarter volume you’re doing better than me.

This is a long-throw projector, so you’ll need at least 3m between it and your screen/wall to get a decent-sized image. The projector has a 195W lamp with an expected lifespan of around 6000 hours in Eco mode.

The HD27 supports 3D, but you’ll need to invest in Optoma’s 3D emitter accessory and some active glasses. Neither of those are supplied in the box. 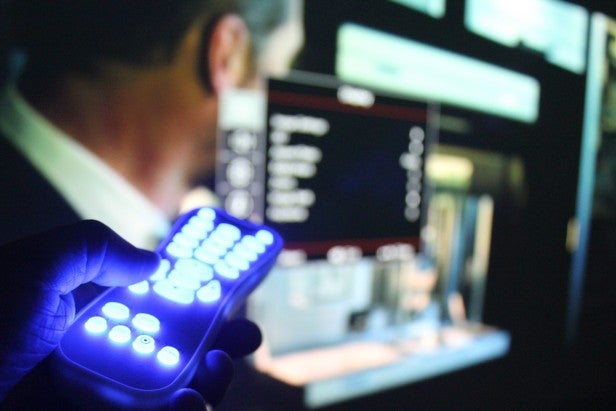 The HD27 proves to be a solid media room proposition. Brightness is rated at 3200 lumens, so you don’t need a fully dark Batcave to enjoy its images – a little ambient light is fine. This is good for social occasions where dips and nachos may be involved. The projector’s not punchy enough to deal with full-on daylight, though.

Fine detail performance is excellent. DLP projectors have a characteristic crispness which can be revelatory. The HD27 looks beautiful with good HD sources such as Blu-ray and Sky Cinema. Colour vibrancy is also high.

If there is an Achilles heel it’s that the projector can’t do true black. Contrast is rated at 25,000:1, but that doesn’t prevent darker images looking flat. During the night-time ice rain sequence in Exodus: Gods and Kings (Blu-ray), there’s not a lot of shadow detail on display.

There’s a selection of image presets provided: Cinema, Vivid, Game, Reference, Bright and User. Surprisingly, there’s not a big difference between them. Tweakers can dig deeper. Brightness, contrast, sharpness, colour, tint and gamma (with presets for film and graphics content) adjustments are just a couple of clicks away, but ultimately the projector is designed to function in full auto. 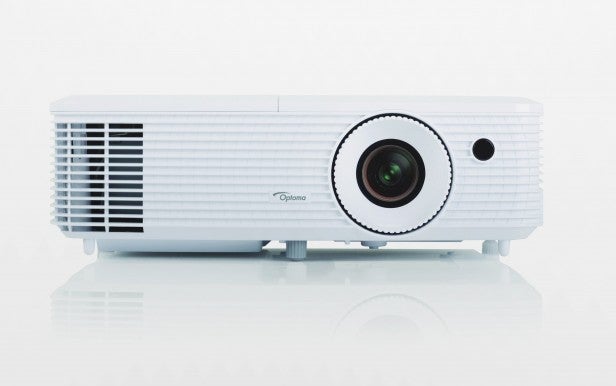 TI’s BrilliantColor processing has always given DLP projectors a fruity pop, and here things look riper than ever. Indeed, colour is the key difference between the HD27 and its predecessor, the Optoma HD26. Optoma has developed a new wheel which it says enabled the projector to achieve 98-99% of the Rec 709 colour space. Exactly how this colour wheel differs from previous iterations isn’t clear, and Optoma only talks vaguely about a new type of material being employed, but there’s no doubting its impact.

There’s no clever image interpolation technology to maintain high motion resolution. But that equally means no ‘soap opera effect’, where everything looks a bit glossy. Films actually look cinematic. As the big reptiles go on the rampage in Jurassic World, they have believable heft and texture. With high frame-rate interpolation, special-effects-heavy movies can look unconvincing and cheap. Here, the Indominus Rex has teeth.

Image lag isn’t a problem, either. Running in Game mode, there was no overt lag during a particularly frantic bout of Overwatch. The cartoony visuals look lush, and detail is largely smear-free. The HD27 provides a fantastic gaming experience.

One less desirable characteristic of single-chip DLP projectors has always been rainbow fringing. The good news is that on the HD27 this is barely noticeable. If you look for it in areas of high contrast, you’ll probably find it – but generally it isn’t intrusive. 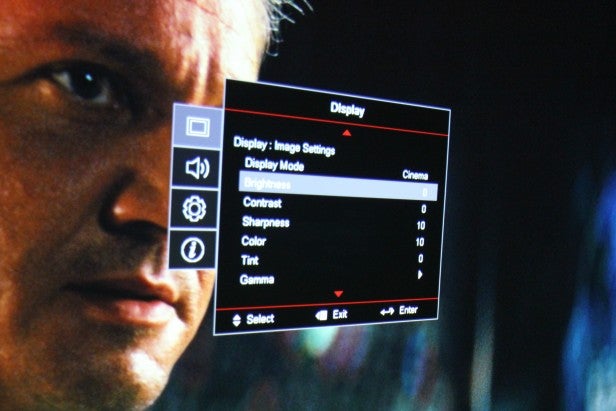 Should I buy the Optoma HD27?

What we have here is a great-value 1080p projector. One of the consequences of that low price tag is a limited black-level performance, and relatively high operating noise. But the HD27 is bright enough for everyday use. Couple it with a Blu-ray player, games console, set-top box or media streamer and you’ll not be disappointed.

The Optoma HD27 proves you don’t need to dig deep for a big-screen experience. Just add a large white wall and some popcorn.