What is the Optoma HD26?

The HD26 is, at £550, a strikingly affordable single-chip DLP projector designed for, in Optoma’s own words, “super-sized home entertainment.” Key features include a very high 3200 ANSI Lumens light output and MHL playback support via one of its HDMIs.

The HD26 is quite a looker for such a cheap projector. Our model came clad in a chic, crisp white over all four of its sides, and the bodywork’s blend of subtle curves, sharp angles and a boldly protruding lens comes together very fetchingly.

The projector’s connections are fine for the money, too, with two HDMIs, a USB port (for servicing purposes), a 3.5mm audio output, a port for attaching an optional 3D sync transmitter, and surprisingly a 12V trigger output for, say, firing up an electronic screen. One of the HDMIs is compatible with the MHL mobile phone protocol.

There are no component video or D-Sub PC ports, but surely most people have now moved beyond these old analogue connections?

The HD26 uses a single-chip DLP projection system with a colour wheel, and sports a Full HD DLP chipset. Its 3200 Lumens maximum brightness rating is unusually high for such a cheap home entertainment projector, yet promisingly this is partnered by a high claimed contrast ratio of 25,000:1. On paper, this combination of specifications may help the HD26 deliver that rare trick of being able to function both in rooms with a bit of light in them and completely blacked-out spaces.

The claimed contrast ratio is not, it must be stressed, native; it’s measured via the HD26’s dynamic black feature, which continually adjusts the output of the projector’s bulb in response to the requirements of the image content. But actually, finding a dynamic black option like this on such a cheap projector is itself impressive – so long as the HD26 makes a decent fist of it, of course. 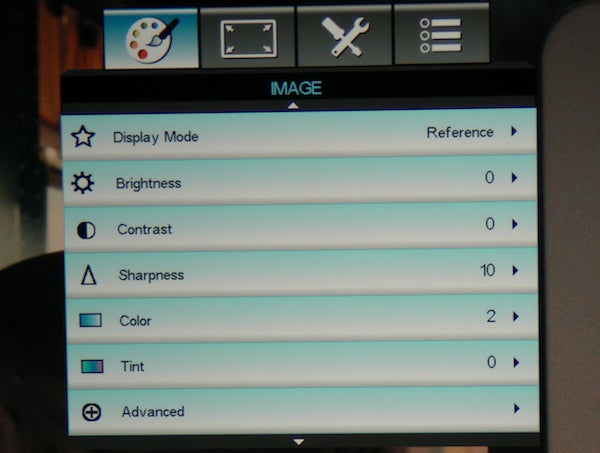 As with most relatively casual ‘living room’ projectors these days, the HD26 comes with its own built-in audio system. And it also follows the recent trend for making these audio systems actually tolerable to listen to, courtesy of a fairly generous 10W of power.

Other highlights on the HD26’s spec sheet are 3D playback – although you get neither the 3D transmitter nor any 3D glasses for free – a backlit remote control, and an unusually long lamp life of at least 5000 hours using the bright lamp setting, rising to 6500 hours if you use the dynamic lamp option.

Optoma usually provides plenty of picture-calibration tools, and the HD26 doesn’t let the side down. Among its most useful tricks are hue, gain and saturation adjustments for the three primary and three secondary colours, as well as white. It also boasts gamma adjustments and four colour temperature presets.

You can toggle the dynamic black feature on and off, pick from a decently well-calibrated selection of themed picture presets – including Game, Cinema and Reference options – and choose from a range of settings for DLP technology’s Brilliant Colour feature.

From our tests, though, we’d suggest not using Brilliant Colour higher than its ‘2’ setting, as higher settings can introduce a little extra noise and some colour imbalances in subtly toned areas.

Also a good move for dark-room viewing is setting the lamp to its Eco option, as this boosts black-level response and colour balance. 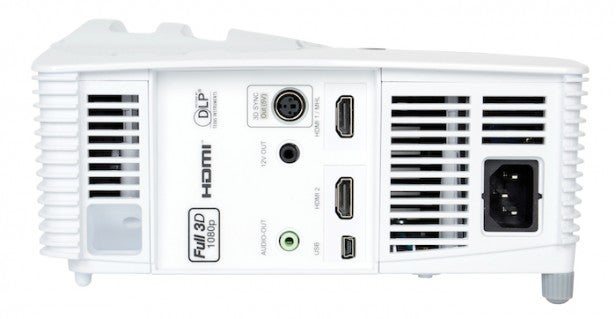 Getting colours looking totally natural takes quite a bit of effort, too. In the end we found the best settings for watching films in a dark environment involved nudging the Tint setting down to -1 and slightly reining in the yellow saturation. Although if you can’t face such efforts, the best picture preset by far for film and TV viewing in a dark room is the Reference one.

While the HD26 is well equipped with picture-calibration aids, it’s rather more basic where mechanical setup is concerned. The amount of optical zoom on offer via the wheel on the lens barrel is so small at 1.1x that it’s hardly worth including, and although the focus wheel is more useful it’s also rather ‘baggy’ in its responsiveness, making it a fiddle to get the focus exactly right.

Predictably for such a cheap projector, you don’t get any optical image shift. So to get the image appearing in the correct place on your wall or screen, you’ll have to make do with adjusting the screw-down legs on the projector’s underside and using the keystone correction. Or at a push you could try the ‘digital image shift’ option to move the image left, right, up or down.

However, the keystone approach leads to digital distortion of the image, while the digital image shift only moves the image up and down within the confines of the 1920 x 1080 chipset. In other words, you’ll lose the edges of the picture, meaning this feature is really only usable for moving the image up and down a little when watching wide-aspect-ratio films with black bars above and below them.