The HD26’s picture quality comes as a very pleasant surprise. Particularly unexpected is how decent its black-level response is. We never found ourselves having to squint through any grey mist over dark scenes, which is a characteristic of many budget projectors, and we could also see impressive amounts of shadow detail in dark areas of the picture, helping dark scenes look as consistent in depth as bright ones.

Also impressive was how neutral dark areas look. By which we mean we didn’t notice any intrusions of blue or green into the blackness, or any of the sort of ‘glowing’ finish seen on some budget projectors. Even the low-level fizzing noise often seen in dark areas with single-chip DLP projectors is largely avoided. 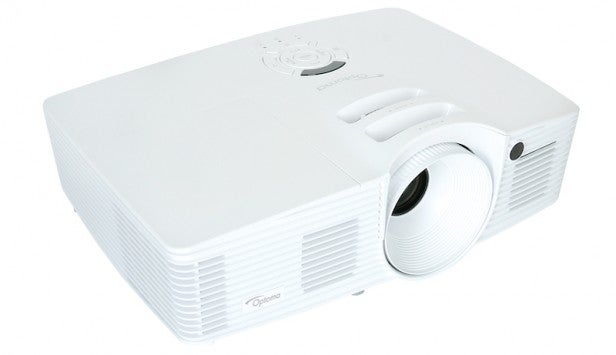 Although the Dynamic Black feature doesn’t deliver as pronounced a contrast difference as we ideally like to see, it does deliver a slight contrast boost and is worth experimenting with. Especially as it works subtly enough not to generate too many over-obvious ‘leaps’ in the image’s overall brightness.

The biggest argument for not using it, in fact, is that it causes some distracting shifts in the noise levels produced by the projector’s cooling fans. These fans aren’t by any means the noisiest we’ve heard from a budget projector, though, and we didn’t notice any additional ‘whining’ from the colour wheel.

The HD26’s running noise can be considered neutral enough not to be distracting when the lamp’s running in non-dynamic mode – unless you’re sat right next to it. It might have been better, actually, if the projector had chosen to stick in the highest fan setting for the Dynamic Black mode, rather than shifting gears up and down.

As noted previously, the HD26’s colours are a little fiddly to get right. Ultimately you need to reduce saturation levels to stop skin tones looking patchy and a little yellow around the gills, which leaves images looking a touch more washed out than on more expensive projectors. But the slightly desaturated look is preferable to the over-ripe, gaudy appearance that colours often have on such cheap projectors, as it still gives you much more believable and subtle tones than you’d commonly find for £550.

The fact that the HD26 can produce a credible black level also does no harm to its colour handling.

More good news about the HD26’s images is that they look detailed and dense, with little sign of any visible pixel structure in the image unless you get your face much closer to the screen than you’d ever want to. Motion looks quite clean for such a cheap projector, too. There’s a touch of judder, but it’s only rarely a distraction.

There’s a slightly softer finish to the pictures than some people might like, but actually we don’t mind this, as it helps hide noise and doesn’t stop you appreciating the detail and pixel density in the HD26’s images. Forensic clarity isn’t actually always a good thing, especially at the budget end of the projection market…

While we predominantly tested the HD26 in a darkened room, its impressive brightness using the Dynamic preset does mean that, as hoped earlier, it copes with a little ambient light much better than most home entertainment projectors.

There are only two significant problems with the HD26’s pictures. First, no matter what we did calibration-wise, we couldn’t stop bold colours looking a touch cartoony. For instance, the yellow explosions and fireballs that occasionally crop up in the last Harry Potter movie tend to look startlingly dislocated from the muted palette of the rest of the film, due to the lack of finesse in the Optoma’s rendition of bold yellows.

The other issue is the rainbow effect, where single-chip DLP projectors can suffer from flickering stripes of red, green and blue appearing fleetingly over very bright parts of the image. To be fair, this doesn’t show up as aggressively or as often as is common with cheap DLP projectors. Plus, more importantly, you can reduce its appearance by keeping the Brilliant Colour and brightness lamp output settings low.

Still, if you’re particularly susceptible to seeing the rainbow effect, you’ll see it from time to time on the HD26, and should maybe consider an LCD projector instead – although you’ll have to accept reduced black-level response with similarly affordable LCD models.