First impressions of the GT1080’s 3D pictures are disastrous. Picture information that should be foregrounded appears in the background and vice versa. Fortunately this bizarre situation is easily fixed by turning on the GT1080’s 3D Sync Invert feature. But we’ve never had to that before with any other brand of projector, so we really don’t get why we have to do it with the GT1080.

Happily, once its initial glitch was sorted out the GT1080 turned out to be a very handy 3D performer. For starters, as we’ve found with other single-chip DLP projectors there’s practically no crosstalk ghosting noise, which makes it easier to appreciate the HD levels of detail in the image – except for those soft corners we mentioned earlier, of course. 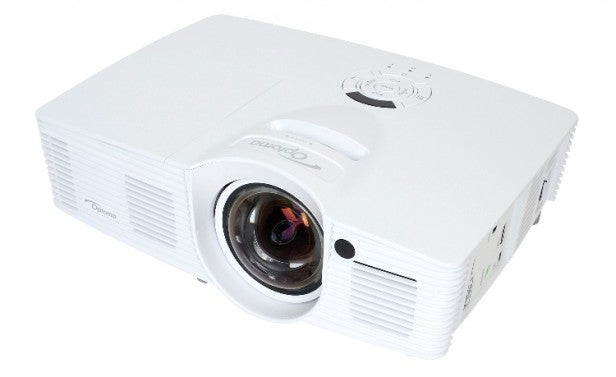 The GT1080’s contrast performance actually seems better with 3D, too, as the shuttering glasses reduce the greyness over dark scenes versus 2D viewing.

Good brightness levels and the absence of crosstalk mean you enjoy a solid sense of space too, and weirdly even colours look more generally natural in 3D mode. Motion across and into the 3D frame is handled nicely as well, with impressively little judder and no evidence of the skin tone fizzing that single-chip DLP projectors sometimes suffer with.

Dark parts of the GT1080’s 3D pictures can look a little low on shadow detail, making them appear relatively flat. But overall the GT1080 is much more fun with 3D than you’ve any right to expect.

While projector sound systems inevitably produce audio that appears distractingly dislocated from the images it’s supposed to be accompanying, we’ve heard one or two projectors recently that really didn’t sound too bad. The GT1080, though, is a fairly typical effort, with its 10W of claimed power failing to avoid the thin, ‘boxed in’, bass-light, prone-to-distortion sort of sound we often hear from projectors. In short, you should only stick with its speakers as a last resort.

It follows from the above that the GT1080 isn’t particularly satisfying when being used in its audio-only mode. It’s fair enough, perhaps, for listening to The Archers, but it sounds pretty tinny with pop and rock music.

The GT1080 is very much pitched at gamers. So it’s great to find that it suffers with only around 20ms of input lag, which is one of the lowest figures we’ve seen from a projector and shouldn’t have much negative impact on your gaming skills.

With its low input lag and affordable price, the GT1080 does have some appeal as a gaming projector. Especially if the short-throw lens suits your room layout. It’s also surprisingly good for 3D – if that still interests you.

However, its uniformity issues take the edge off the clarity of your game graphics, and its colours and black levels aren’t quite as satisfying for movies as those of the BenQ W1070Plus.

The GT1080 is a solid effort that can be considered decent value – especially if you’re after a short-throw, fast-response projector for gaming. But while its pictures are competitive in most ways, its uniformity issues are troubling enough to prevent us from being able to recommend it unreservedly.