As its name cunningly suggests, the BenQ W1070 DLP projector is a revamped version of the original W1070 which made such a great first impression on us when it appeared at the end of 2012. But are the revisions BenQ has made enough to make the W1070 competitive in 2014? And are they also enough to justify the £90 extra the new Plus model costs over and above the original W1070’s £549?

The W1070 is an attractive projector, as usual for BenQ. Its top and bottom sides sport a fetching gloss white finish, while its front, sides and arced area above the lens barrel are clad in a shiny grey finish that contrasts cutely with the white. The lens sits deep within a large circular recess set slightly to the right side of the projector’s front edge, and there’s access to simple zoom and focus wheels through a hole in the top panel.

The W1070 is handily small too, making it easy to move in and out of a cupboard if you’re not looking for a permanently installed projector solution. There’s a slight concern that the hefty amounts of grilling around the W1070 ’s sides may lead to some light pollution and excessive cooling noise, but overall BenQ’s new projector update makes a good first impression. 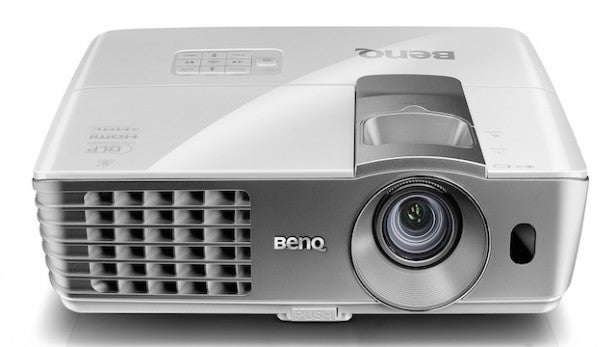 It’s with its connections, though, where the W1070 makes its first move to improve on the original W1070. For starters, it can now handle the MHL mobile phone connection format via an optional dongle. Much more significant, though, is the W1070 ’s compatibility with a new optional extra Wireless Full HD Kit.

As you would expect these days, this kit comprises transmitter and receiver boxes that can stream uncompressed 1080p 2D or 3D content from your sources to the projector without the need for any cabling. It’s rated as being good for wireless coverage up to 30 metres, and uses four built-in antennas to support streaming through furniture doors and even through walls between rooms.

Turning to the W1070 ’s insides, its single-chip DLP system uses a Darkchip 3 chipset from Texas Instruments, with colour coming courtesy of a 6x speed, six-segment RGBRGB colour wheel. This colour wheel should be capable of keeping a rein on the ‘rainbow’ striping problem associated with single-chip DLP technology.

The W1070 ’s claimed contrast ratio is the same as that quoted for the original W1070 and is fairly typical of affordable DLP technology at 10,000:1. However, the new Plus model’s brightness is slightly higher than its predecessor at 2,200 ANSI Lumens. Hopefully BenQ has been able to control this extra brightness well though, for too much brightness on a budget projector can lead to some pretty demoralising black level deficiencies and, in DLP’s case, elevate awareness of the rainbow effect.

Other key features in the W1070 ’s armoury are active shutter 3D playback (though no glasses are included as standard) and its short-throw lens, which can give you a 100-inch picture from a throw distance of just 2.5m.

The W1070 also joins most other ‘casual’ projectors in boasting a built-in audio system. However, the W1070 takes its audio duties much more seriously than most by introducing a new 10W ‘resonant chamber’ speaker design. We’ll find out how effective this really is later.

The W1070 is both flexible and straightforward to set up. The focus and zoom settings are easily adjusted via the reasonably responsive wheels accessed through the projector’s top edge, and the set ships using an impressively straightforward ‘basic’ suite of menus.

The star of the initial set up show, though, is the projector’s optical vertical image shift. Slide back a panel behind the zoom and focus window in the top panel and you gain access to a little screw via which you can physically adjust the height of the W1070 ’s images without mucking up the image’s geometry.

The amount of vertical image shifting available is limited – 110%-130% – but any sort of image shifting on a projector at the W1070 ’s price is extremely rare and enormously welcome. Though it was also available on the original W1070 too.

The W1070 is so replete with picture adjustments that it’s earned the backing of the independent Imaging Science Foundation (ISF) as a projector capable of receiving a pro-level calibration by one of its engineers – so long as you’re willing to pay them for the privilege, of course.

Throw in some horizontal keystone correction (for levelling up the image’s sides) to support situations where you may have to set your projector to the side of your projector screen, plus simple screw down legs on both rear corners and a drop down leg under the centre of the front edge, and it’s hard to see how the W1070 could feasibly have provided more setup flexibility for its money.

For best quick results from the W1070 , we’d suggest using the User 1 picture setting, with key adjustments being to reduce the sharpness to around its 10 level, turning Noise Reduction off for HD sources, setting Gamma to 2.2, and setting the lamp power to either Economic or Smart Eco. We’ll discuss these lamp settings later, in the picture quality section.

If you get the Wireless HD system to go with your W1070 , we’re pleased to say that it’s extremely easy to set up. You just plug the transmitter and receiver into power sockets, and attach the necessary HDMIs, and that’s it. The two boxes ‘see each other’ with no help needed from you.