Oppo’s intention with the UDP-203 was always to set a new gold standard for Ultra HD Blu-ray disc playback, and this is exactly what it’s achieved.

I’ve been lucky enough to spend serious time with all of the other currently available Ultra HD Blu-ray players – including the outstanding Panasonic UB900 – and the UDP-203’s pictures surpass them all.

For starters, HDR images look punchier and more intense than they do on the previous class leader, the UB900. Peak bright details look slightly more extreme, while the deepest blacks look both darker and, more importantly, more nuanced in their delivery of shadow detailing and subtle light gradations.

This combination of extremity and finesse in the UDP-203’s delivery of HDR’s expanded luminance range is a thing of beauty, ensuring that not a single HDR frame looks forced or strained. Rather, you’re left with the overwhelming feeling that this is what HDR is really supposed to look like.

The UDP-203 enjoys a similar edge over the competition with its colour reproduction. Heavily saturated HDR tones clearly look richer and bolder than they do on the UB900. Yet, again, this extra push doesn’t ever look overcooked or unnatural.

In fact, as with its expanded luminance range, the UDP-203 feels like it’s getting closer to showing us the full potential of wide colour gamut technology than any rival UHD BD players to date. Especially since the extra richness of the colour palette is partnered with impeccable subtlety when it comes to delivering even the finest of tonal differences and colour blends.

Perhaps the biggest surprise about the Oppo UDP-203’s stunning picture quality is how much sharper it looks. Small details in the image – hair, pores, the weave and texture of clothes and so on – clearly look more defined and crisp than I’ve seen them look before. Simple head-to-head comparisons of the same frozen 4K frames of the Panasonic UB900, Samsung UBD-K8500 and Xbox One S confirm this. And it’s a degree of difference that you don’t have to stick your face right up against the screen to see. 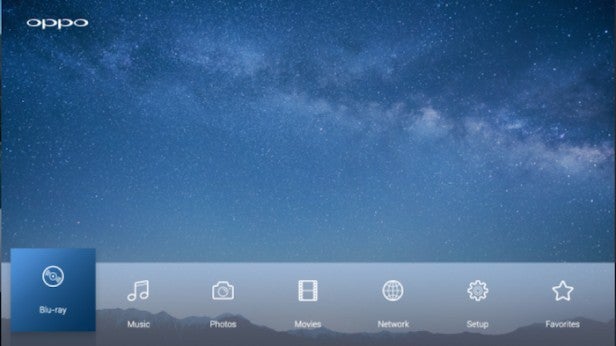 While Ultra HD Blu-ray discs are starting to appear now, you may well find yourself having to watch HD Blu-rays on the UDP-203 from time to time. So you’ll be pleased to learn that it upscales HD to 4K very well indeed, introducing a genuine sense of extra detail without exaggerating source noise or creating new noise.

Neither the Samsung UBD-K8500 nor Xbox One S can hold a candle to the UDP-203 in this respect. However, I’d say to Panasonic’s immense credit that the UB900 is slightly better still at upscaling HD discs, leaving them looking just a little more detailed and crisp.

The UB900 also marginally outperforms the UDP-203 in the audio department. Except for the very occasional and brief audio drop-out on the UDP-203, both decks sound more or less identical with digital movie soundtracks. There is, however, a touch more clarity and musicality to the Panasonic’s playback of music.

Don’t forget, though, that while the UB900 just edges out its rival in musical performance terms, the UDP-203 does support SACD and DVD-Audio discs, while the UB900 does not.

If you’ve invested in a good-quality TV or projector capable of benefiting from the class-leading HDR Ultra HD Blu-ray goodness that the Oppo UDP-203 can deliver, then you seriously need to consider buying one.

No other player – not even Panasonic’s mighty UB900 – does such a fantastic job of squeezing every last drop of picture quality out of the Ultra HD Blu-ray format.

However, the imminent addition of Dolby Vision support (something the UB900 will not be getting) will certainly help in the value for money department when it rolls out in March/April.

The UDP-203 isn’t without its issues, but when it comes to picture quality, it makes 4K Blu-rays look more beautiful than they’ve ever looked before – and that’s even before its Dolby Vision update has arrived on the scene.