The Oppo Reno lacks some of the defining features of its larger sibling but it still packs in some interesting technologies.

While all eyes may have been fixed on the new Oppo Reno 10x Zoom flagship and its 5G-capable doppelgänger, its namesake also arrived in a more conventional form, simply dubbed the Oppo Reno.

The Reno is the most affordable member of Oppo’s new international smartphone line, focussing on the design and sensibilities of the more potent Reno 10x Zoom but in a more compact package.

You can still expect a beautiful glass body, the latest take on Oppo’s VOOC fast-charging technology and the Reno line’s distinctive ‘pivot rising’ front-facing camera but beyond that, this phone undoubtedly feels more restrained than its flagship counterpart(s).

It’s worth looking at the Reno through the lens of the Reno 10x Zoom (no pun intended) when its comes to cameras. Unlike the latter, this model lacks the impressive lossless zoom capabilities that define its counterpart.

Instead, it shares in the same impressive 48-megapixel primary lens, however, in this case, it’s supplemented with a single 5-megapixel secondary snapper, which provides depth data for background bokeh when snapping portrait shots. 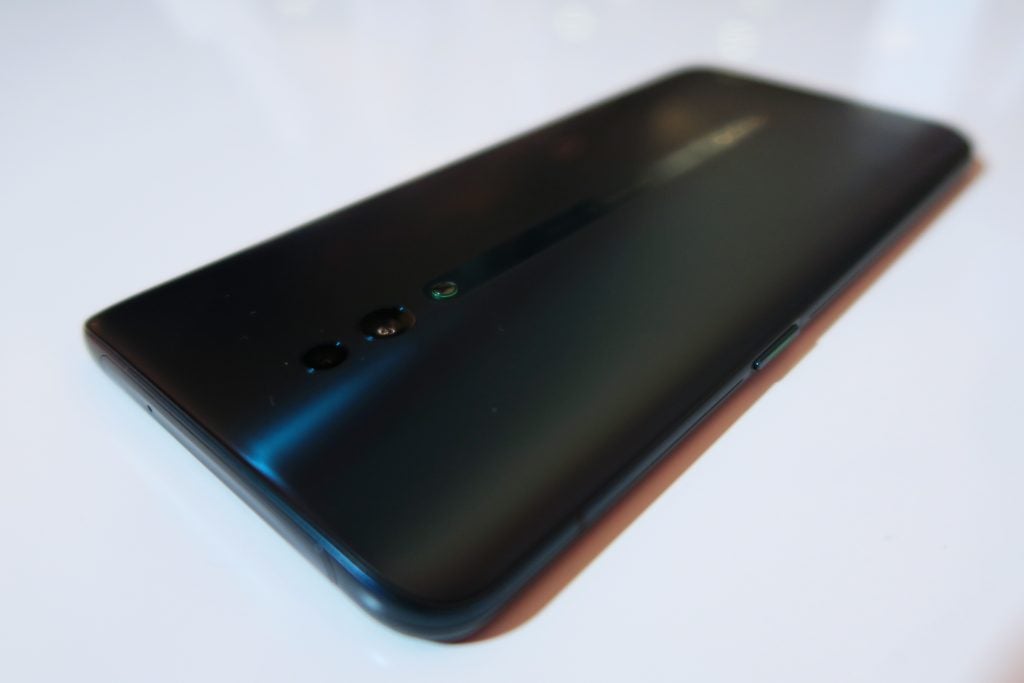 Sony’s IMX586 48-megapixel sensor is impressive in its own right, boasting a half inch sensor size, an f/1.7 aperture, 26mm focal length and 0.8µm pixels. It’s been employed by phones like the Honor View 20 and Xiaomi Mi 9 to great effect and the results should be similarly promising here.

Unlike its appearance on the 10x Zoom, there’s no OIS (optical image stabilisation) to speak of, however, the sensor’s pixel-binning smarts let it condense four pixels’ worth of image data into one to create a more refined 12-megapixel final image and grant it some level of high-fidelity digital zoom.

You can also expect up to 4K recording at 30fps (as opposed to 60fps on the 10x Zoom) and a wealth of technologies to improve image quality and general capture performance. 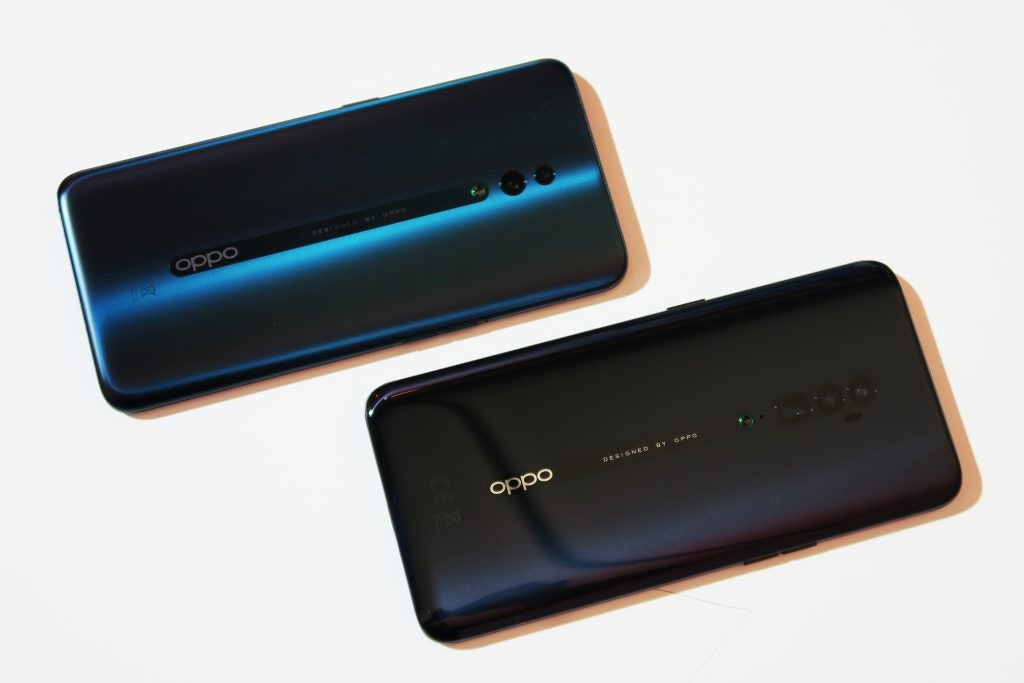 The AI imaging smarts attached to the Reno’s photographic capabilities include the company’s Ultra Night Mode 2.0 and Dazzle Color technologies, both of which have a focus on trying to improve colour accuracy, while the former also places an emphasis on greater dynamic range and noise reduction in difficult, dim shooting conditions.

One other shared imaging element between all three Reno models is their front-facing 16-megapixel snappers, all of which feature an f/2.0 aperture and use yet another algorithmic portrait mode to render subjects cleanly, even in the face of heavy backlighting. There’s a diffused front-facing LED flash array too.

Despite such promising selfie chops, to look at, you won’t readily spot the Reno’s front-facing camera. In fact, the phone’s screen extends to the fringes of the phone’s body all the way around, with respectably narrow bezels on all sides. There’s not even a hole-punch camera within the boundary of the display itself, as on the Samsung Galaxy S10 family. 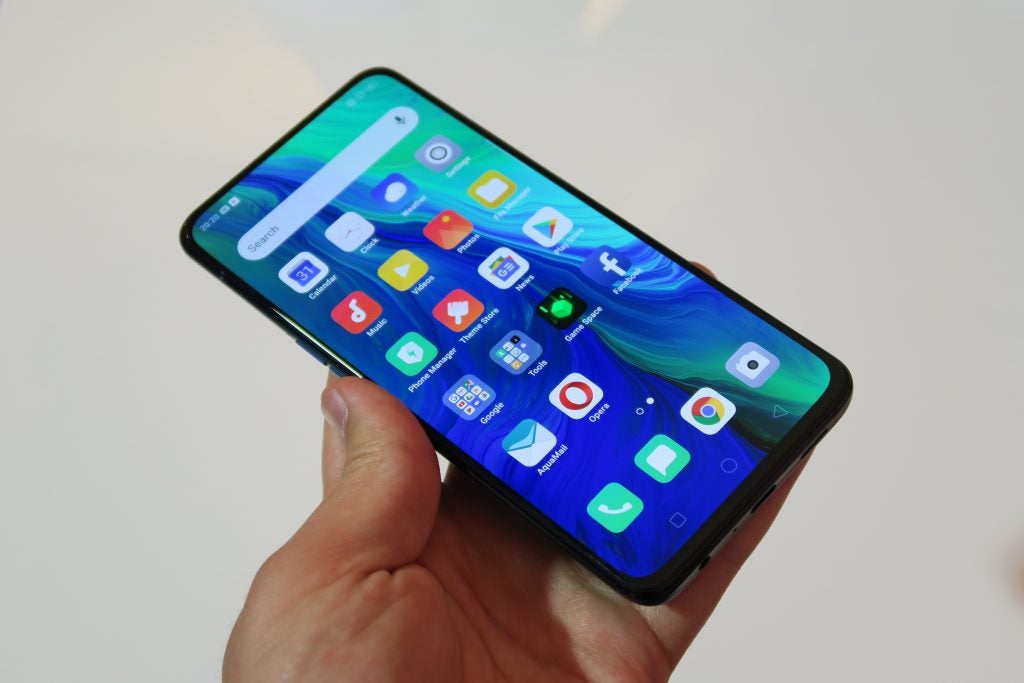 Instead, Oppo has hidden the front-facing camera module and both the front and rear camera flashes within what it calls the ‘pivot rising camera’ – a motorised pop-up assembly with an asymmetrical shape that rises up on when side when snapping a selfie or using face unlock.

It’s not dissimilar from the mechanism that featured on last year’s Oppo Find X but doesn’t require the whole top edge of the phone to rise up as a single piece. It also comes with ‘free-fall detection’ which means it automatically retracts back into the phone should you accidentally fumble your Reno.

As for the rest of the phone’s form, it carries traits from the 10x Zoom like a contrasting gloss and textured glass back that captures the light nicely, there’s also zero camera bump so the back of the phone feels continuously smooth against your palm. 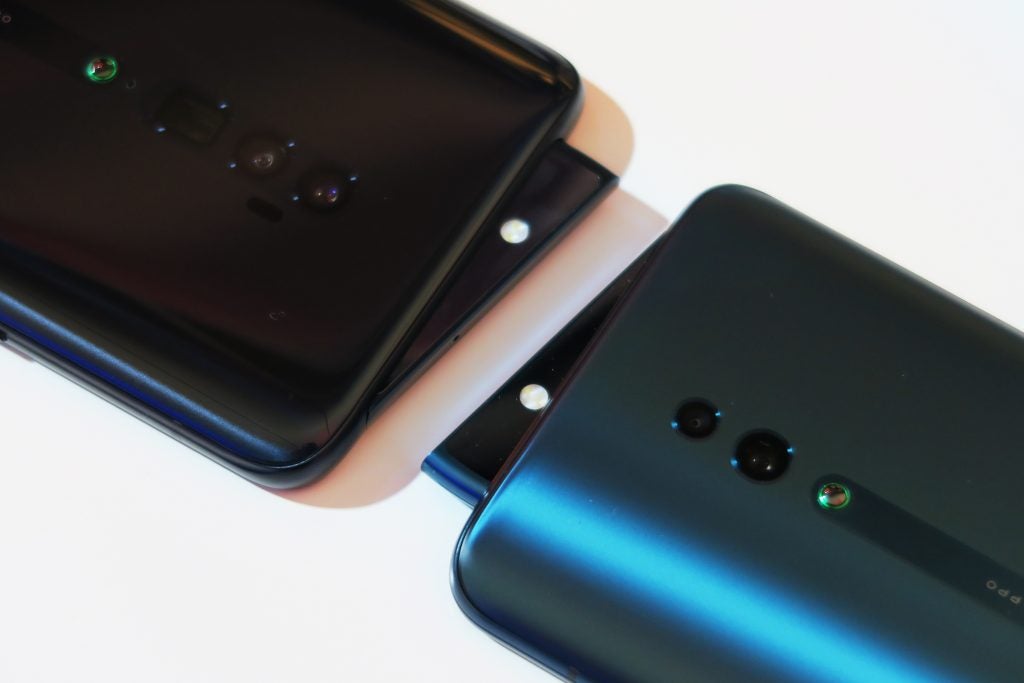 So as to avoid scratching up the glass work and, more importantly, the rear cameras, the Reno also features what Oppo has questionably named the ‘O-dot’. This small ceramic bead sits beneath the main camera setup and raises the phone off any flat surface it’s s placed on to mitigate the risk of scratches and scrapes. It’s a small detail but a smart consideration that rivals like the similarly camera-bump-free LG G8 lack.

The Reno is a touch easier to handle compared to the bigger 10x Zoom, dictated primarily by its smaller 6.4-inch 19.5:9 ‘panoramic’ display. The OLED panel at play is equally arresting, however, with great colours and contrast, crisp visuals and bonus features like an improved blue light filter (over Oppo’s previous iterations) and an in-display fingerprint sensor, which the company says is over 28 percent faster than its technology previously was.

There’s a €300 price gap between the Reno and its zoom-savvy sibling, with performance being the other notable difference. In place of Qualcomm’s premiere mobile SoC, the Reno makes use of the more conservative Snapdragon 710, paired with the option of either 6GB or 8GB of RAM. 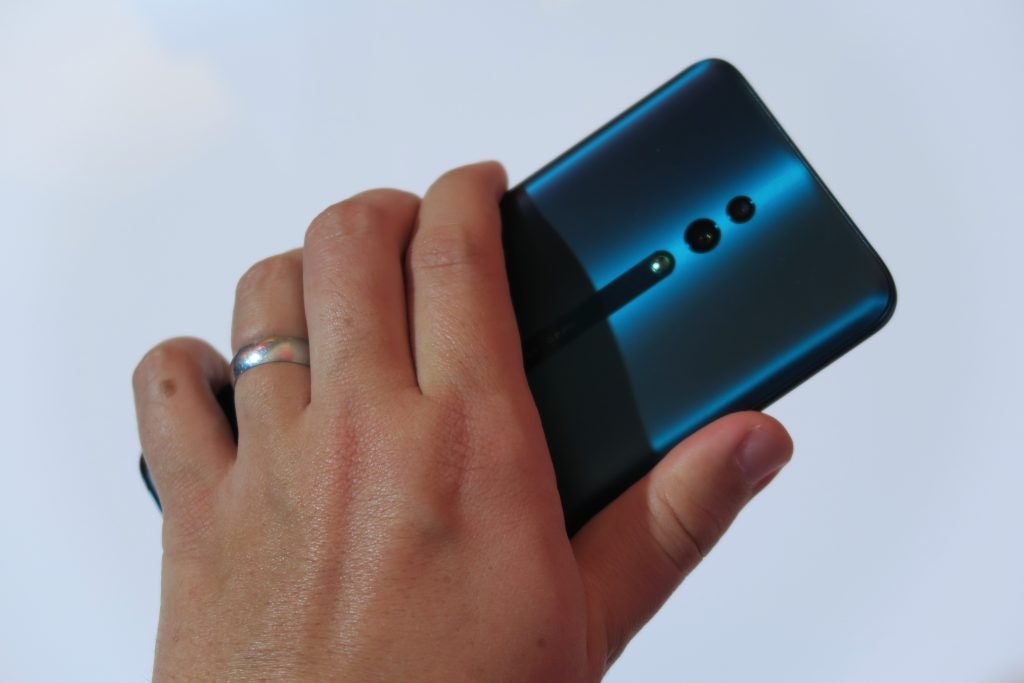 In real-world testing, this chipset should still prove plenty capable, not least because it’s essentially a remix on the architecture used by last year’s Snapdragon 845 silicon.

There’s also the matter of Oppo’s ColorOS 6 overlay, running atop Android Pie. Beyond a newly-revamped visual language and different interaction changes compared to a base Android experience, this latest release includes what the company has named HyperBoost 2.0, system-level software designed to reduce app load times while improving system speed and latency when gaming.

An integrated 3765mAh battery should keep the Reno alive and kicking quite happily for well over a day’s use and while wireless charging isn’t part of the equation here, the phone does at least support Oppo’s own VOOC fast-charging technology.

Oppo hasn’t yet disclosed the speed of charging, but as we’re talking about VOOC and not Super VOOC here, as found on some of its other smartphones, I suspect the Oppo Reno supports a maximum 22.5W charge rate. 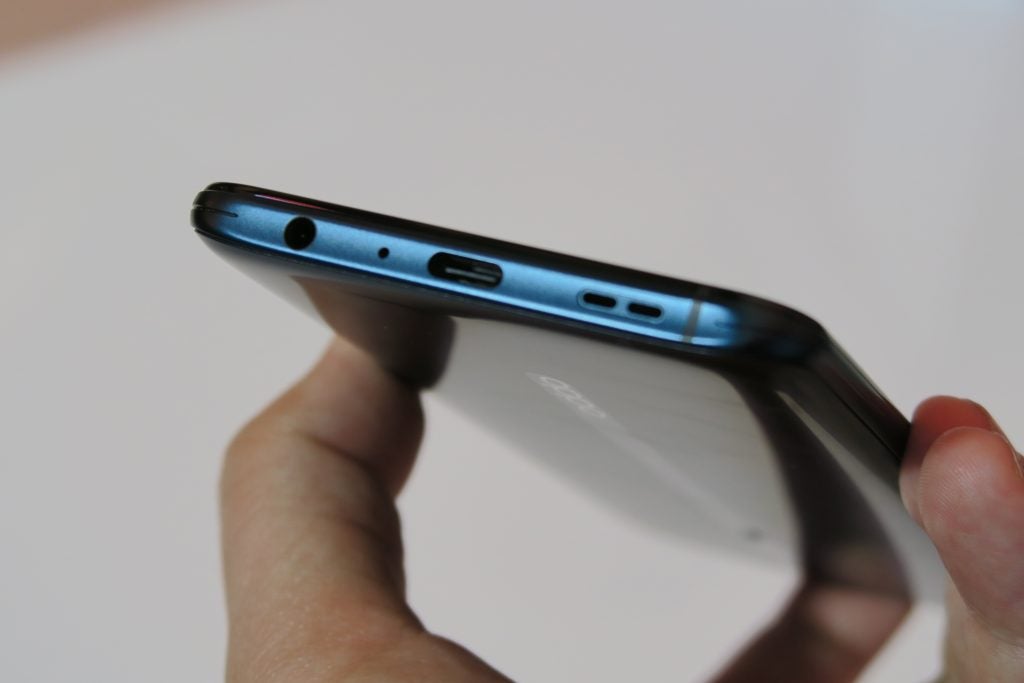 Unlike the 10x Zoom, the standard Reno retains the 3.5mm headphone jack

What is new is the inclusion of new VOOC 3.0 technology, which focuses on improving charging speed and efficiency at the trickle charging stage, when the battery is almost full. Even if the rate of charge hasn’t changed, the Reno’s battery should be able to rejuvenate 23.8 percent faster than were it relying on VOOC 2.0 charging.

Oppo announced pricing and availability for all three of its new handsets, with the base model 6GB RAM/128GB storage SKU of the standard Reno costing €499 and slated for a May 10 launch in select European markets.

There’s ambiguity around when the Reno line is coming to the UK but an expected May 20 launch is rumoured to be on the cards, at which point we’ll be able to lock in regional pricing.