Just so we’re clear about this from the off, this is the Onkyo TX-SR508 we’re looking at. It’s not the NR509. As followers of Onkyo product lines (!) will realise, this means we’re looking at a ‘retiring’ model rather than Onkyo’s newest kid on the block.

But this is actually exactly why we’re looking at the SR508. For as we’ve found on numerous occasions over the years, some products achieve their maximum appeal right at the end of their shelf life thanks to the lovely modern phenomenon of Internet discounting. So with a new price of just £220, the SR508 looks a perfect target for our bargain-hunting radar.

After all, it really does offer some pretty remarkable specification for its relatively low cost. The headline feature, without doubt, is its carriage of 3D-capable HDMI sockets. You get four v1.4 HDMI inputs and a single v1.4 HDMI output, meaning that 3D signals can be passed through the receiver and on to your TV or projector. Plus, of course, you can use the SR508 as a four-way 3D switching box should you be lucky enough to have four 3D sources (maybe a Sky HD box, an Xbox 360, a PS3 and a Blu-ray player!).

Also key to the SR508’s appeal is its ability to receive and decode 7.1-channel DTS-HD Master Audio or Dolby TrueHD high-bandwidth HD audio feeds via its HDMI connections.

Of course, though, if any AV receiver is going to take in HD audio, it’s also going to have to carry the toolset necessary to try and do HD audio justice. In the SR508’s case, this toolset kicks off with a 7 x 80W power rating, delivered by Burr-Brown 192kHz/24-bit DACs for all channels.

But there’s plenty more besides – much more than you would expect to find on such a low-priced receiver. It boasts a high-current, low-impedance drive, plus optimum gain volume circuitry, more circuitry dedicated to removing resolution-spoiling jitter, and Onkyo’s Wide Range Amplifier Technology (WRAT). This latter system was specifically developed to handle high resolution audio formats, and offers an improved dynamic signal to noise ratio and better handling of sound ‘peaks’.

None of the tricks in the previous paragraph are exclusively for HD audio, though. They can all be used to improve standard DVD movie soundtracks, CDs, and even compressed digital audio formats like MP3.

Having mentioned MP3, though, it needs to be stressed that one side effect of the SR508’s relative age is that it doesn’t exactly go a bundle on multimedia stuff. There’s no USB input for direct playback from USB storage devices, and there’s no LAN port or wi-fi for accessing Internet radio services or your networked PC. The SR508’s replacement, the NR509, which is just hitting stores, carries both built-in network and USB connectivity.

Your only multimedia option for the SR508 is a Universal Port that gives you a single-cable connection to Onkyo’s optional extra dock for iPhone/iPAd or DAB radio tuner.

In terms of rear connections you DO get, aside from the aforementioned HDMIs and universal port, there are two component video inputs and one component video output; four composite video inputs (with attendant audio inputs) and two composite video outputs; a subwoofer pre-out, an extra set of stereo audio inputs labelled TV/CD; two optical and two coaxial digital audio inputs; FM and AM radio antennas, and a stereo line out for providing audio to a second audio zone.

The speaker connectors, meanwhile, are sturdily made and able to take banana plug connections as well as standard raw cable feeds.

Setting the SR508 up is as easy as setting up any AV receiver ever could be. The speaker terminals are colour coded, all inputs are clearly labelled, and there’s a very simple set of onscreen menus to help you allocate the right input to the right AV source.

The menus for balancing the sound for your room are easy to follow, and there’s further automatic audio refinement via the Audyssey room acoustics and loudness correction system. Admittedly you only get the basic ‘EQ’ version of Audyssey, which isn’t as fulsome in its calculations as higher-level Audyssey options. But it would be unreasonable to expect anything more, and what’s there works well enough.

Other features of the SR508 include AV Sync Control (up to 100ms in 10ms steps), a sleep timer, RDS tuner support, and crossover adjustment.
The only significant feature absentee beyond the multimedia stuff noted earlier is that there’s no resolution upscaling through either the HDMIs or component video outputs.

What really matters about the SR508, though, is that it actually works! As in, 3D signals really do pass through the HDMI sockets without any apparent loss of quality, and HD audio formats really are played through a sensible partner set of speakers with a degree of quality that comfortably belies the receiver’s current £220 price.

Transitions around the soundstage, be they side to side or back to front, are handled with authority. Surround mix details are positioned accurately in the soundstage, and extremes of bass and treble information are handled surprisingly cleanly, without bass sounding baggy or trebles sounding harsh.

In combination these factors add up to a consistently coherent, tightly controlled soundstage that’s much more immersive and transparent – in the sense that you just appreciate the sound rather than the electronics producing it – than you would normally dream of hearing for just £220 notes.

The receiver’s sound reproduction is sensitive enough, moreover, to pick up and portray detailing even in very complicated mixes, and perhaps best of all, the receiver has got just enough power handling (before distortion sets in) to deliver at least a sense of the extra resolution and dynamics of HD audio mixes versus standard DTS or Dolby Digital ones. The differences are especially – though not exclusively – apparent during rich, orchestral scores.

The SR508’s excellent value will be even more eye-catching to people who have or want to invest in 7.1 speaker systems, who probably didn’t think they’d be able to satisfy so many speakers for so little money.

At this point we need to do a reality check and say that the SR508 doesn’t remotely rival the audio quality of more expensive receivers from the likes of Pioneer, Denon and even Onkyo itself. The overall tone of the sound isn’t as warm and inviting as that of the very best receivers, there’s not quite as much fine detail in play during subtle soundtrack moments, CD playback sounds slightly less authentic than more musical receivers, and although the SR508 can deliver a sense of HD audio’s benefits, it doesn’t quite enjoy the dynamic range of more powerful alternatives.

There’s also not much point using the SR508 with a particularly high-end set of speakers, as it’s not refined or powerful enough to do them justice. But then if you’ve spent loads on speakers, you probably won’t likely be only spending peanuts on your AV receiver anyway. 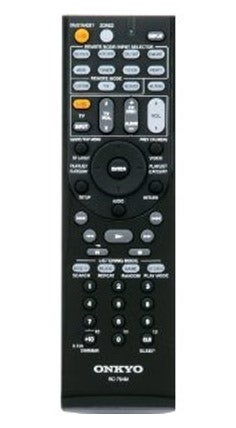 Finally, we should say we experienced a glitch or two during our tests. Occasionally the receiver didn’t handshake properly with our 3D Blu-ray player until we’d switched it (the receiver) off and back on again. Also, we regularly couldn’t switch the receiver off using the power button on the remote, even though every other button worked fine. At first we thought this was an error with our review sample, but happily the comment below from Gunholio helped us get to the bottom of it. However, while we now get what’s happening, we have to say we still don’t like it much!

The SR508 can’t completely shake off the shackles of either its relative age or its extreme affordability. With this in mind, we can understand completely why people might feel tempted to find the extra £80-£100 required to get the newer NR509. However, in today’s chastened times £80-£100 is still £80-£100. Which is why we have a sneaky feeling that remaining stocks of the SR508 might stocks might disappear quite fast. So if you fancy picking up another summer bargain, we suggest you get a move on…