Not so long ago we cast our eyes (and ears) over Onkyo’s TX-SR576, a great value entry-level receiver that offers Dolby Digital Plus decoding and superb audio performance for the money. But Onkyo’s ability to deliver this sort of amazing sound quality at the lower end of the price scale left us tingling with excitement at the prospect of what its high-end models are capable of – and now we’ve got the chance to find out with the TX-NR906.


It’s the replacement for the universally adored TX-NR905 and as you’d expect for a receiver costing well over a grand, its specification is absolutely staggering, providing the perfect demonstration of how today’s AV receivers have gone from simply decoding movie soundtracks to performing a wide range of essential functions, not all of which are audio related. 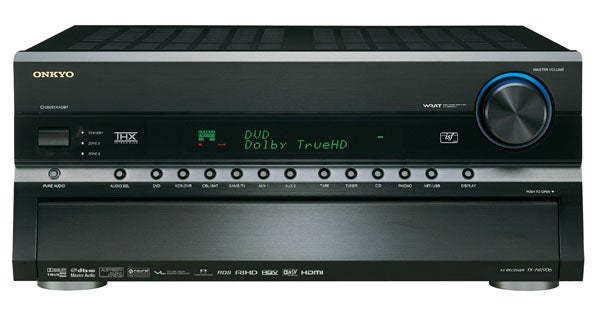 Perhaps the most impressive of its talents is its networking capability (indicated by the ‘N’ in the model name), which allows you to stream MP3, WMA, AAC, WAV, FLAC, and Ogg Vorbis audio tracks from a networked PC, as well as listen to internet radio stations using the vTuner portal.


And like many of today’s AV receivers, the Onkyo boasts 1080p video upscaling, but this is no ordinary upscaler – at its heart is the HQV Reon-VX chipset from Silicon Optix, recognised as one of the world’s most advanced video processors. Most companies would stop there, but not Onkyo – the TX-NR906 is also the world’s first AV receiver to feature video calibration facilities courtesy of the Imaging Science Foundation, which allow you to tweak the brightness, contrast, hue, saturation and gamma levels on each video input.


But audio is the TX-NR906’s raison d’être, and on that score it leaves no stone unturned. It blasts out 7 x 230W of room-filling power and is equipped with three Texas Instruments Aureus 32-bit DSP chips, which allow the unit to decode any format you throw at it, including Dolby True HD, DTS HD Master Audio, Dolby Digital Plus and DTS HD. It also gets the George Lucas seal of approval with its THX Ultra2 Plus certification, which incorporates THX Loudness Plus technology – a new processing algorithm that enhances sound at low volumes. 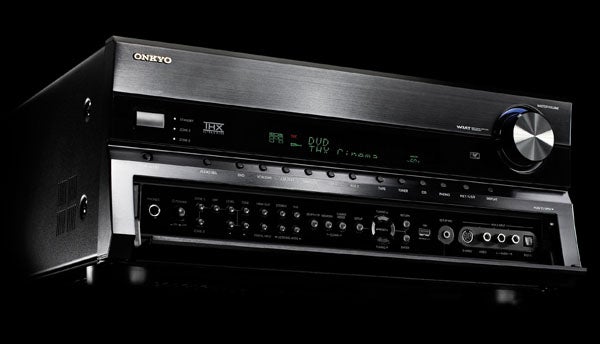 You’ll also find a wealth of other audio wizardry courtesy of Audyssey, including a MultiEQ XT mode that checks the characteristics of your room and system (number of speakers, their size, distance from the listening position and crossover frequencies) using test tones and a setup microphone placed at up to eight positions around the room, before automatically setting the optimum EQ levels. This can be used in conjunction with Audyssey Dynamic Volume and Dynamic EQ, which process the sound in real time to level out the varying volume levels of different types of material, and to maintain consistent sound quality when the volume is adjusted.


The scary thing is that these are merely the highlights – there’s a plethora of other listening modes and high-powered audio circuitry on board, and we’d need a separate website to list them all (check Onkyo’s website for a full spec run-down).

In terms of looks, Onkyo has done a good job of making this beast of a receiver look stylish and friendly, giving you the option of black or silver (the former is more fetching). But be warned: it’s so frighteningly heavy that you’ll need a helper to lift it.


Most of the front-panel controls and connections are hidden under a flap at the bottom, but there’s also a row of buttons above it that provide quick, direct access to the various inputs, plus a large, bright info display panel (which gratifyingly shows the name of the format being decoded in big, bold letters). No high-end receiver would be complete without a massive volume dial, and sure enough there’s one on the right-hand side.

The rear panel looks like one of those old telephone exchange consoles, covering every single type of socket imaginable. There are four HDMI inputs and two outputs – all of which are v1.3 compliant with Deep Colour, x.v.Colour and Lip Sync support – plus three component video inputs, five S-video and composite inputs, three coaxial digital audio inputs, two optical digital audio inputs (and one output) and more analogue stereo sockets than you’ll ever need.


In addition there are 7.1-channel analogue outputs and pre-outputs, with extra stereo pre-outs for second and third zone playback. What’s more, when using a 5.1-channel setup, you can use the surround back channel speaker binding posts to bi-amp the front channels and increase the power. Other rear connections include Ethernet and RS232 ports, remote control ports and FM/AM antenna inputs.


On the front panel are more AV inputs and a USB port, which allows you to connect a flash drive or MP3 player, and because the NR906 is certified for Windows Vista (formerly known as Plays For Sure), you can play similarly compatible devices.


Despite its inherent complexity the TX-NR906 is surprisingly easy to install and use. The main reason for this is the inclusion of MultiEQ and the excellent on screen setup menu, which presents the vast array of options in a clear and logical way. But you can also access the setup menu from the front panel if you don’t have the video outputs rigged up, and the clearly listed options make it an equally effective way of adjusting the settings.

We’re also impressed by the backlit remote, which is predictably large and crammed with buttons, but it doesn’t take long before you feel comfortable with the layout. You have to select different remote modes to control the unit’s various functions, which results in some fruitless button pressing if you forget which mode is selected, but on the whole we don’t think Onkyo could have done a better job.

In action the Onkyo delivers truly astonishing multichannel movie sound. After loading Cloverfield into the Samsung BD-P1500 Blu-ray player and letting the Onkyo get its teeth into the disc’s 5.1-channel Dolby True HD track, we were instantly pinned in our seat by one of the most commanding and engrossing audio performances we’ve heard in a long time.


The centre channel voices dialogue with distinction and life-like clarity, allowing the words to easily cut through the booms and bangs as the monster stomps around Manhattan. Meanwhile rear-channel effects are guided with precision and perfect timing, giving sudden transient effects real bite and reproducing subtle ambience with due care and attention, all of which contributes to a captivating and expansive soundstage. 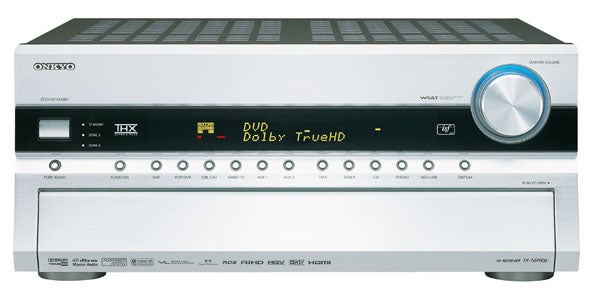 The sharp, strident midrange and treble are backed up by some immense bass work, which blends beautifully into the mix to create a coherent, solid wall of sound. It’s the sort of inspirational performance that will make you fall in love with home cinema all over again, and will certainly give Onkyo’s rivals something to chew over in product planning meetings.


We also had a quick blast of Army of Darkness on Blu-ray and the Onkyo’s handling of its DTS HD Master Audio track is equally mesmerising – and call us shallow, but it’s still a novelty seeing the DTS HD format’s name appear in the front panel display.


The unit also delivers a fantastic performance with music, replaying a 5.1-channel Japanese jazz DVD-Audio disc with spine-tingling detail, drive and cohesion. It even turns in a top-drawer performance with CDs, squeezing out every last drop of sonic detail and giving the material a snappy, rhythmic feel that would make even the most staunch hi-fi purist nod along in enjoyment. 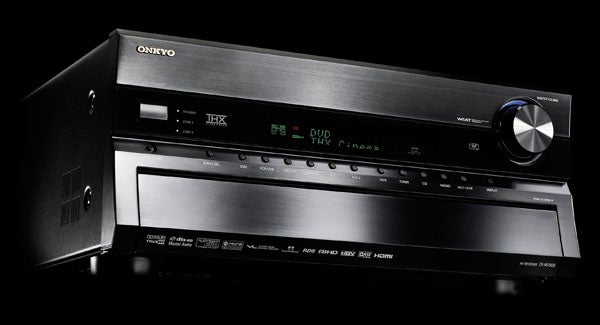 As for pictures, we fed a 576p signal into the HDMI port from a DVD deck and let the HQV chip ramp it up to 1080p. The results are impressive but the improvements over a decent upscaling DVD deck are too slight to make this the compelling reason to buy one. More remarkable are the ISF tweaks, which can make a big difference to picture quality and when calibrated properly could reduce your display’s power consumption by up to 50 per cent.


Finally, the Onkyo’s network functionality is loads of fun to play around with and works perfectly. The onscreen menus are straightforward and welcoming, making it easy to find the music you want, and after streaming some 320kbps MP3 files from a laptop via a wireless router, we were blown away by the clean, punchy sound quality. Internet radio is similarly easy to access, with loads of stations pre-programmed into the unit’s memory, though sound quality obviously depends on the quality of the stream.


With a vast array of features, neighbour-scaring power output and sophisticated audio technology, the Onkyo TX-NR906 is not a receiver for the faint hearted or those with a bad back. It is, however, perfect for people with ever-expanding systems who want to experience the very best sound quality from Blu-ray discs and DVDs. In short, the TX-NR906 is a phenomenal AV receiver that’s worth every penny of its asking price.