Samsung follows up the impressive BD-P1400 with the predictably named BD-P1500, which adds a few features missing from its predecessor but keeps the price at a very affordable level.


Most significantly, the BD-P1500 is a Profile 1.1 player and can therefore play BonusView material found on an increasing number of Blu-ray discs. But the clever part is that it’s ‘BD Live ready’, which means it can be upgraded to Profile 2.0 by downloading the relevant firmware update from the Samsung website, which should be available in October.

The BD-P1500 looks very different to the BD-P1400 – out goes the curved fascia and in comes a flat front panel and a slimmer chassis. The gorgeous gloss-black finish remains (a must for any self-respecting BD player) and buttons are kept to an absolute minimum, making this deck a real piece of eye candy.


Around the back, the lack of 5.1 or 7.1 analogue audio outputs is unsurprising at this price, but it means that you’ll need an AV receiver with HDMI inputs to enjoy HD audio soundtracks. Otherwise it offers all the basics, including HDMI, component, composite, optical digital and stereo audio outputs.


There’s also an Ethernet port for making firmware updates and downloading BD Live content when the unit is upgraded, plus a USB port for ‘service use only’ – but our guess is that you’ll need to plug an external memory device into this when you upgrade to BD Live, which will provide the local storage needed to download web content (in the same way that the latest Panasonic and Sony players need SD cards and Memory Sticks to store content).

The BD-P1500 performs most of the tricks you’d expect from a Blu-ray player, although its inability to play DivX, MP3, WMA or JPEG files is very odd in this day and age, and the lack of DTS HD Master Audio decoding is a pity. However, it does decode Dolby True HD and Dolby Digital Plus, and can output them in bitstream form.


There are three audio output options on board to cater for the needs of different audio systems when playing BonusView discs. By selecting PCM, the deck decodes the Primary and Secondary tracks into PCM and outputs it from the HDMI port. Bitstream (Re-encode) decodes both streams into PCM, then re-encodes it into a single DTS bitstream that’s available from the optical output, allowing those without HDMI-equipped receivers to enjoy BonusView audio. Finally, the Bitstream (Audiophile) option outputs the Primary soundtrack via HDMI for your AV receiver to decode, but you won’t be able to hear the Secondary audio track.

The player’s excellent main menu makes it a doddle to setup. It’s presented in high definition and all of the options are clearly arranged, plus it responds instantly to remote control commands. We also love the cute jingles that play when you turn it on and off. Making firmware updates is a straightforward process if you have a DHCP router, and an update was already available during our test (but sadly it wasn’t the BD Live one).


Disc loading times still aren’t exactly up to DVD standards, but the BD-P1500 is evidence that operating speeds have come on leaps and bounds since the first generation of hi-def players. From standby, it has the tray open in under five seconds and reaches the first menu screen of ”Transformers” in around 57 seconds, which is far more tolerable than the two-minute loading times that we used to endure. 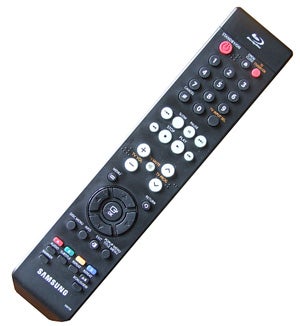 It’s not all plain sailing though, particularly when fast-forwarding or rewinding through a disc. Hit the search keys and there’s a frustrating pause before it starts whizzing through the disc, and when stepping up to the faster speeds it’s infuriatingly unresponsive.


But despite these operational gripes, the Samsung’s picture performance is stunning, as demonstrated by its adept handling of Warner’s pristine 1080p transfer of ”The Shining”. Right from the famous opening shots of the car travelling along a hillside, the deck’s excellent detail response can be seen in the sharply rendered trees and rocks, while the transparency and depth of the image makes you believe for a moment that you’re riding alongside Kubrick in the helicopter.

Further evidence of the BD-P1500’s superb detail handling is provided throughout the movie – for example, you can clearly make out the brickwork and tiling of the Overlook Hotel during exterior long shots, plus the fine pattern on Jack Nicholson’s plaid jacket during the interview scene is crisply rendered.


Other elements of the picture are impressive too – Kubrick’s creepy colour palette looks bolder and more startling than ever before, with no banding or crawling to spoil the purity, while the deep blacks and crisp whites reveal a fantastic contrast range.


The smooth Steadicam shots of Danny racing round the hotel on his tricycle suggest that the 24fps output is doing a good job at keeping judder at bay, although the vertically scrolling opening titles look a little stilted in their journey to the top of the screen.

On the whole the Samsung’s performance comes very close to that of the Panasonic DMP-BD35, which is a compliment indeed, though the Panasonic’s images are just a touch crisper and sharper.


As for DVD playback, the Samsung does a fairly good job with the tricky ”Seven” disc, taming the noise a little more effectively than the DMP-BD35, but it’s still no match for a dedicated upscaling DVD player from the likes of OPPO or Denon.

Sonically the BD-P1500 is impressive, orchestrating ”The Shining’s” uncompressed soundtrack with pleasing openness, clarity and detail. We can’t fault stereo CD playback either, which is clean and well-balanced. On the downside, during ”Transformer’s” BonusView ‘Heads Up Display’ the secondary audio is fairly quiet when mixed into PCM and was hard to hear over the primary soundtrack.


It may not be the most user-friendly or feature packed Blu-ray deck around at the moment, but the bottom line is that the BD-P1500 allows you to get your hands on a Profile 1.1 player for under £200 if you shop around, and that’s not to be sniffed at. Its picture performance at this price is excellent, but the best part is that it can be upgraded to support BD Live, which means it’s not going to be outdated any time soon. Those who want DTS HD MA decoding, multimedia playback and analogue audio outputs should look elsewhere, but otherwise the Samsung is a great choice for those who want to upgrade to Blu-ray on a tight budget.