What are the Onkyo Maiden Audio ED-Ph0n3s?

Anyone other than the most rabid Iron Maiden fan will probably be put off instantly. However, as a result of painstaking tuning by Iron Maiden guitarist and producer Steve Harris alongside the engineers at Onkyo, these are actually some of the most uncompromising and challenging closed-back portable headphones you’ll find for £200.

It’s a pity then that their design arguably makes them look cheaper than they are. 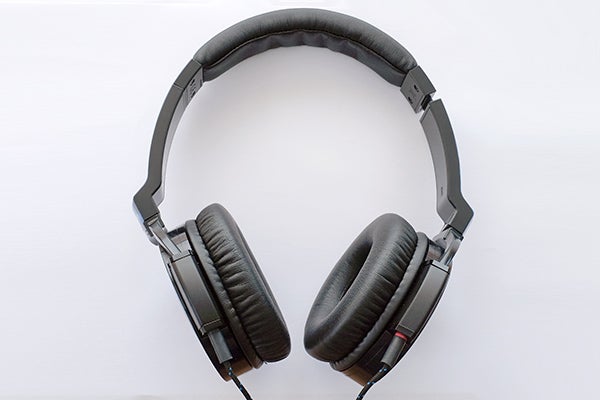 If you were to take some sandpaper to the Maiden Audio ED-Ph0n3s, you’d end up with headphones that sport a look that’s fairly similar to the first set that Onkyo released a few years back: the ES-HF300. They’re full-sized headphones, but with perfectly round pads that may fit a little to snuggly to some ears in places.

Design-wise, just check out those decals: the Maiden Audio ED-Ph0n3s are clearly made for only Iron Maiden fans. Most of the outward-facing parts of the cups are home to shameless graphics of the Iron Maiden mascot, Eddie the Head. 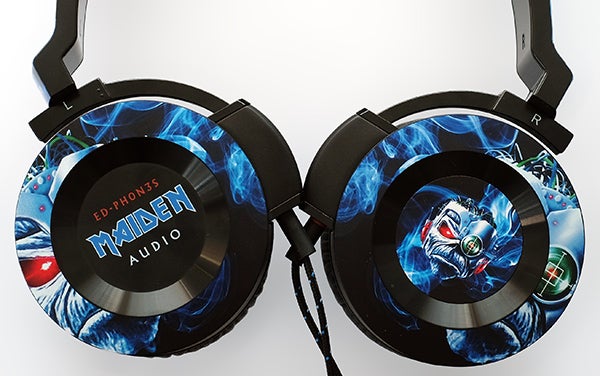 The headphones are bright and bold – but in truth, they look like kiddie headphones. You can imagine Spongebob Squarepants splashed across headphones such as this. Perhaps it’s no worse than wearing an Iron Maiden tour T-shirt, though.

Onkyo hasn’t taken a particularly cheap route to applying the graphics, however. The cup visuals sit on metal, and appear to be printed onto a deliberately roughened area – to make the paint “stick”, I presume. The parts that extend up the headband are printed onto plastic. Thankfully, there’s no sign that either would chip or peel off. 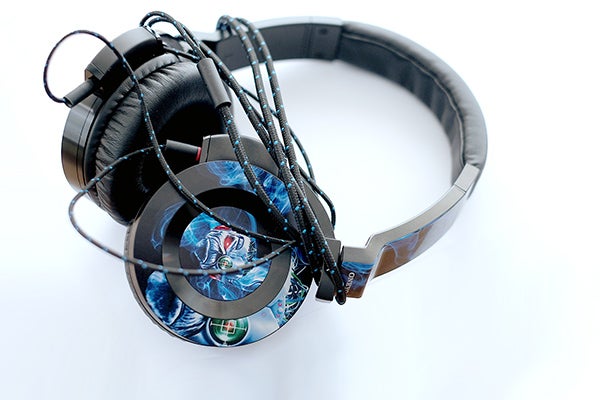 In terms of the shape and size of the units, they offer a great design for a larger portable headphone. The headband distributes pressure evenly across your head with generous foam padding, the metal cups fit the price, and the headband doesn’t protrude too much.

However, I have found that – like the original Onkyo HF300 – the Maiden Audio ED-Ph0n3s can cause a little ear cartilage pain following a few hours’ listening. It’s because their fully round pads don’t really account for the shape of the ear, and use fairly firm foam that has little “give” to account for those little movements we all make unconsciously.

The Iron Maiden ED-Ph0n3s has a non-removable, fabric-braided cable without any remote housing. At this price, plenty of headphones offer removable – and, therefore, replaceable – cables, but I’d rather this style than the micro-coax type Onkyo used to include. The connection in a previous Onkyo pair went flaky following only a few months’ use. 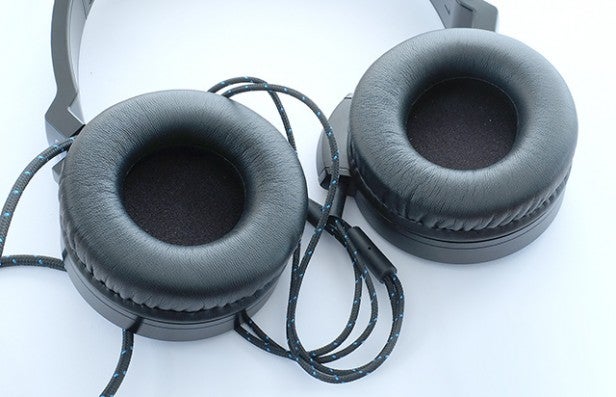 Read the blurb on the box and you’ll assume that the Onkyo Iron Maiden ED-Ph0n3s are “made for metal”. However, you need to delve deeper to appreciate what has gone into making this pair of headphones.

Iron Maiden bassist Steve Harris has worked on the sound with Onkyo’s engineers, and on talking to an Onkyo rep it appears that he’s had final sign-off on the sound signature. This is the man who has been behind the production of Iron Maiden’s albums since the 1970s.

I wasn’t aware of this when first putting them on, and so felt huge relief on discovering that they were actually quite good. 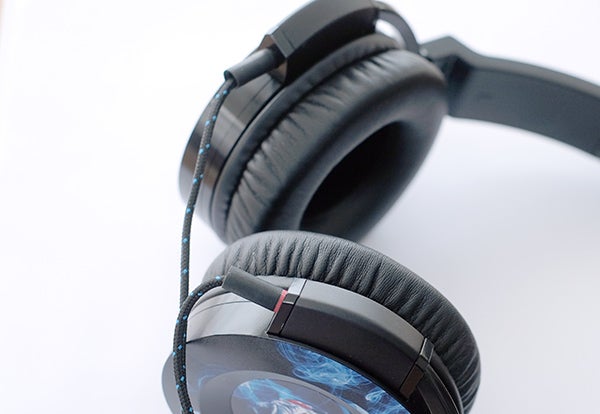 Compared to other portable headphones around this price point, the specific aim of the ED-Ph0n3s is clearly to bring out better-defined mid-range detail than is the norm.

This may not be what you expect: zoning-in on the bass of “dance” and “hip-hop” headphones doesn’t take a genius. But when someone screams “are you ready to rock”, you don’t think about the coherent mids that are about to wash over you.

It’s here that I began to hone in on what the Ed-Ph0n3s are about. They don’t want to recreate “live” rock sound, which is often pretty poor. Instead they want to deliver the whole, “as intended” album experience. And that’s at the root of any high-end headphone.

The Maiden Audio ED-Ph0n3s trade away the low-mid and bass bulk that would normally be a feature of portable headphones.

Headphones such as the Sennheiser Momentum use this extra bulk to ensure they can deal with street noise. Without it, or very good isolation, a headphone is in danger of sounding thin in noisy environments – which would in turn make you increase the volume and lead to the sound becoming harsh.

There is a little of this effect to the ED-Ph0n3s. They have decent isolation, but these are idealistic, no-compromise headphones that are clearly made to deliver a specific sound. They’ve been directed by an audio enthusiast rather than by committee. 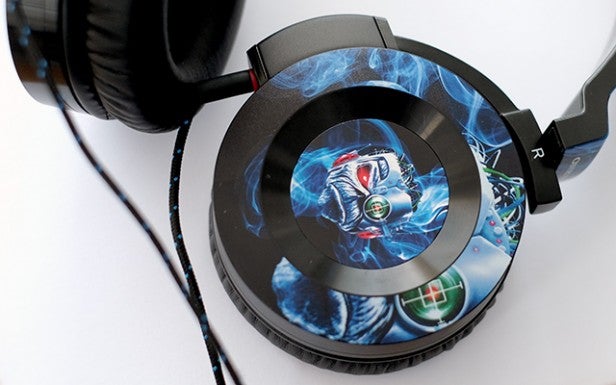 This comes with pros and cons. First, the mid-range clarity is superb. As promised, the Maiden Audio ED-Ph0n3s make guitars sound fantastic – and that’s no mean feat. They’re able to deliver the crunch of an overdriven guitar with real style.

More often than not, when headphones aim for such mid detail they end up as ear-graters that just aren’t much fun to listen to. The SoundMagic Vento P55 are the most recent example.

It’s really the most ambitious sound signature for a £200 set of headphones to aim for. It’s difficult to pull off – and it goes against what marketeers would have you believe that headphone buyers want.

Onkyo has pulled it off, and it works wonders for all music, not just metal. There’s great coherence, and properly textured vocals as well as guitars.

These mids are far less accommodating than you get in other pairs, though. While I think they’re well-handled, they are a little hard, lacking either the ear-charming soft finish of a less ambitious pair or the finesse of, say, a £400-500 pair of headphones.

The Maiden Audio ED-Ph0n3s push their luck – but just about get away with it. They’re about as far from easy-listening headphones as you can get, in both a good and bad sense.

That slight lack of smoothness is the only real issue, although the tonality of the mids could also be better. The smoothness issue becomes more apparent the louder the volume – and it may well get on your nerves if you have a particularly noisy commute.

Still, the bass is unusually well handled, missing the safety cushion we’d normally get, but still able to deliver real deep punch. The treble is well extended and largely non-sibilant.

Should you buy the Maiden Audio ED-Ph0n3s?

I find the Onkyo Iron Maiden ED-Ph0n3s to be one of the least cynical music tie-in headphones to date. Given the somewhat limited numbers I expect them to sell – not everyone wants to wear their Iron Maiden fandom on their head – the effort put it in is impressive.

Their sound is also carefully considered and delivers what it promises.

They really are headphones that make hard rock sound better than most others. The only question is whether this is what people really want when the result, at this level at least, is one of an unforgiving edge to the sound that doesn’t sit well at very high volumes or ultra-casual, easy listening.

Uncompromising rock headphones, with one of the most impressive audio tie-ins to date.