Olympus has long been a pioneer of the ruggedised camera concept, with the company’s early Mju models among the very first digital compacts to offer basic weatherproofing – a theme Olympus built upon with the introduction of the ‘Tough’ series a few years ago. But whereas Olympus once had the market almost to themselves it’s since become a lot more crowded, with most of the other major manufacturers offering a ‘tough’ model of their own. So how does the 12-megapixel TG-820 measure up? 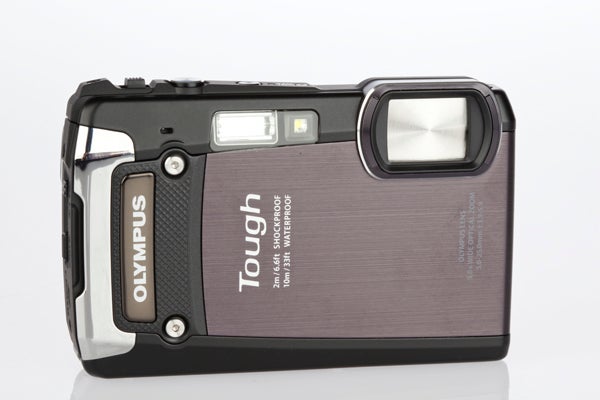 Well, turning first to its all-important ‘tough’ specs, the TG-820 is waterproof to 10m, freeze-proof to -10˚C, shockproof to 2m and, in a new twist, crush-proof to 100kg. That just about makes it officially as tough as Chuck Norris, albeit with one hand tied behind his back. While we were able to test the basic waterproofing, freeze-proofing and crush-proofing claims (it passed on all counts), the shock-proofing element is harder to verify and it’s certainly worth noting that Olympus do not offer any guarantees should you be tempted to test its effectiveness yourself.

Internally, the TG-820 gets a 5x optical zoom, which offers a 35mm focal range equivalent of between 28-140mm and uses a folded lens design to keep it housed entirely within the camera body. For added protection it’s shielded by a metal screen that automatically slides back when the camera is switched on, closing again when it’s switched off. The zoom itself is operated by a serrated rocker switch on the top of the camera and is easy enough to operate, although it’s also rather sharp and can dig into your fingers if you press too hard.

Shooting modes are all of the fully automatic variety, although there is a good range of options including a Program mode that offers a degree of user control over key settings such as ISO and white balance. This is supplemented by an iAuto scene recognition mode, a Beauty mode for enhanced portraits, and a selection of Scene modes. Last but not least is a generous selection of 12 Magic Filter digital effects and a Panoramic mode for one-touch ultra-wideangle photography. Movie recording abilities extend to a maximum 1080p Full HD (backed up by 720p and VGA quality capture) although sound is recorded in mono. 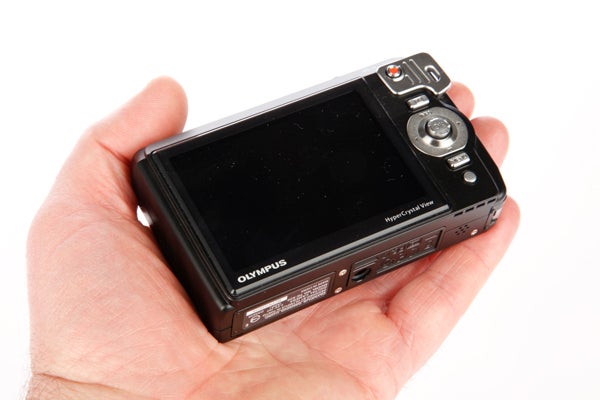 One aspect that really does impress is the rear LCD screen. Thanks to the combination of thick glass and low-resolution screens these have traditionally been a bit of a let down on ruggedised cameras, however the TG-820 bucks the trend with a class-leading, ultra sharp 3inch, 1.03m-dot screen. Not only is it exceptionally useful for reviewing captured images with, it’s also scratch resistant and viewable in bright conditions. Indeed, we’ve yet to see a tough compact with a better screen.

Picking the TG-820 up for the first time initial impressions are pretty good. There’s a reassuring weight and solidity to it that adds to its overall tough appeal. While the majority of the outer shell is constructed from polycarbonate, the front of the camera is inset with a metal plate – although this does appear to be as much for aesthetic purposes as for any added protection it might offer. 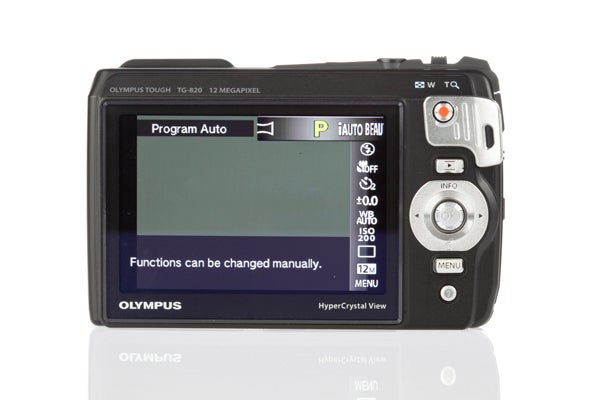 On the back of the camera the thumb rest is also constructed from metal and doubles up as the attachment point for the wrist-strap. We were a little bit disappointed to note that the supplied strap isn’t particularly robust though. It would be good to see something a bit chunkier, or perhaps even a mounting point that can be used to attach carabineers or suchlike, as seen on the Canon D20.  As is usually the case with waterproofed cameras the battery resides inside a fully sealed chamber accessed by a two-part locking mechanism.

Switching the TG-820 on, the start-up process takes a fraction under 2.5 seconds after which the camera is ready to shoot which is pretty good for a compact. Drive modes include a regular Single-shot mode, with which it’s possible to shoot around seven full-res frames every ten seconds; a 5fps Sequential (Continuous) mode that can take around 50 consecutive shots at full-resolution before the camera begins to slow down. 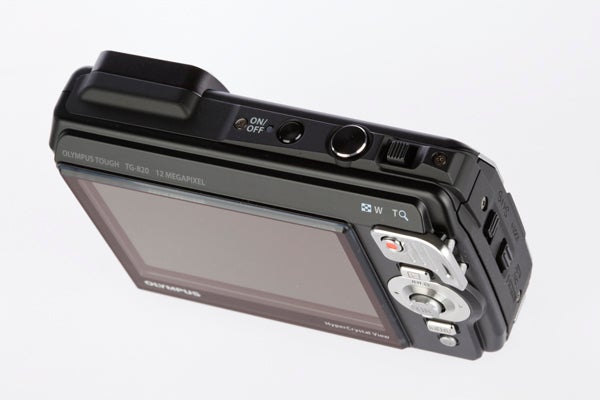 Of added appeal to those looking to capture fast action are two additional High-Speed drive modes that offer capture speeds of 15fps (High1) and 60fps (High2) for 100 consecutive shots. The trade off, as is often the case with this type of feature, is a reduction in overall resolution to 3MP. In practical terms this means you won’t want to make any poster-sized prints of images shot using the function, although they should be perfectly adequate for sharing on Facebook and suchlike.

Autofocus is pretty much instant in good light but does become noticeably slower once the lade fades. The TG-820 comes fitted with an LED AF-Assist light on the front of the camera but, try as we might, we couldn’t get the one on our review sample to work. Focusing options include a single central focus box along with a pretty reliable face detection option.

General operation is fairly straightforward – even while wearing thick gloves – thanks to the addition of Tap Control. Once activated this rather ingenious feature allows you to control the camera simply by tapping it on the sides, top and bottom; effectively turning the camera body into a giant directional-pad. The first tap opens up the quick menu down the right-hand-side of the screen from with subsequent taps navigating up down left and right. Once you’ve made your selection or changes simply double tap the LCD screen to confirm them, exit the quick menu and return to regular shooting mode. 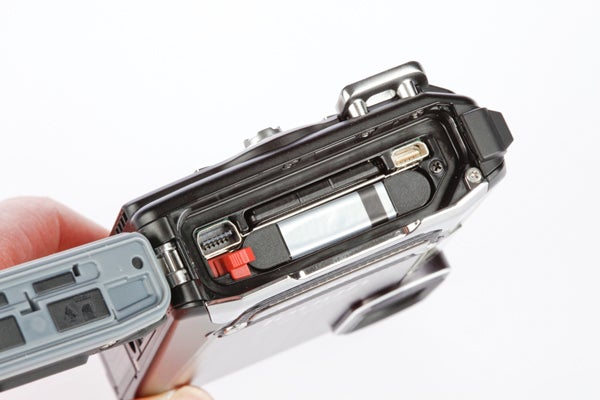 If you’re not wearing gloves then the extruding thumb-stick on the back of the camera serves exactly the same function as the Tap Control, albeit in a more traditional way. For more detailed changes you’ll need pull to the side of the trail and/or take your gloves off in order the press the small Menu button below the thumb-stick. The in-camera menu isn’t overly complicated though and is pretty easy to navigate, which makes adjustments fairly straightforward.

Image quality is actually pretty good for a camera of this type, with the TG-820 able to deliver, on the whole, quite punchy images. Metering is generally quite accurate, with the option to switch between centre-weighted and full-screen balance (ESP). Used in iAuto mode the TG-820 delivers vibrant images with pleasing levels of colour, contrast and tonality.

The TG-820 produces clean, noise-free images at lower sensitivity settings of up to ISO 200, and while a small amount of noise is visible at ISO 400 it isn’t overly obtrusive. ISO 800 is the cut-off point in terms of noise control with images at this setting showing visible softness. Above ISO 800 things go quickly downhill with ISO 1600 also showing a noticeable loss of colour saturation. The top settings of ISO 3200 and 6400 will enable you to take pictures in very poor light but you can also expect very poor image quality. 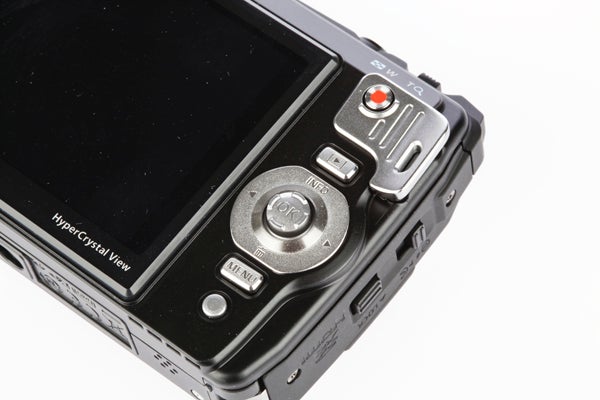 In the past we’ve often found folded lens compacts have a nasty habit of producing noticeably soft images, especially when they’re used at their telephoto extremes. The Olympus TG-820 suffers from this a bit too, with the corners and edges noticeably softer than the centre of the frame. That said, the TG-820 is still sharper than much of the competition and unless you’re examining your images at 100% or more it isn’t likely to be much of an issue. We found the lens produces the occasional bout of purple fringing, although on the whole this is actually quite well controlled for a lens design of this type.

Fine detail also suffers a bit under close examination, displaying that slightly smeared/painted on effect that’s all too common with small-sensor compacts. Again though, this isn’t really an issue unless you specifically go looking for it by enlarging your images to 100% and beyond. Viewed on regular laptop screens images look perfectly sharp and detailed enough.

While the TG-820’s regular minimum focus distance is around 60cm, there  are two Macro modes including a Super Macro setting that enables you to get as close as 3cm. We found that images taken at this setting came out very well, and while the Macro element isn’t necessarily the main reason to buy a TG-820 it’s still a useful feature to have. 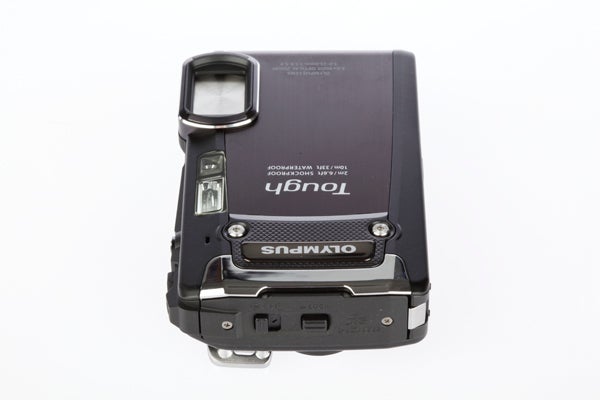 We suspect that the dozen Magic Art filters will find favour with the TG-820’s target audience of young, adventurous and active types, as they can be easily used to add a bit of extra sparkle to images – particularly useful on overcast days or when the light is totally flat. The range of effects on offer is pretty good too, with everything from the ubiquitous Miniaturisation and Toy Camera effects to an interesting Fragmented tile effect and a fun Mirror effect.  The portrait-specific Beauty mode, meanwhile, offers a bit of easy-to-use in-camera vanity, although some restraint does need to be exercised so as not to overdo the skin smoothing and lightening effects.

Verdict
The Olympus Tough TG-820 is one of the better ruggedised compact digital cameras on the market. Partly because it’s built like Chuck Norris, but also due to the fact that it’s relatively easy to use and delivers pretty good results. We especially like the Tap Control function and the pin-sharp LCD screen delivers class-leading performance too. While it’s essentially a fully automatic point-and-shoot compact, the generous range of digital filters and fun shooting modes mark it out as a very good little camera. If you’re on the lookout for a bombproof compact then the TG-820 is definitely worth putting on your shortlist. 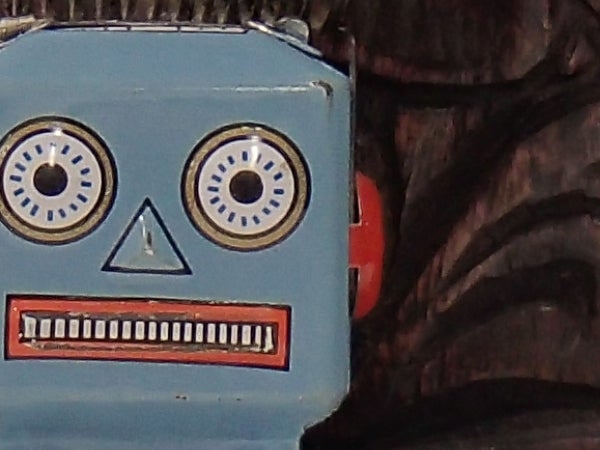 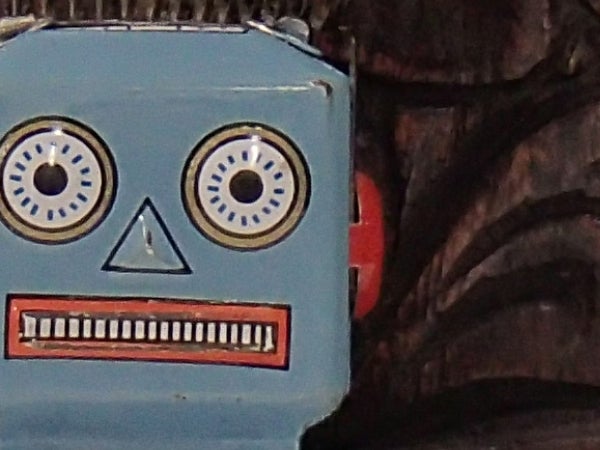 ISO 200 is similarly free of noise with good shadow detail. 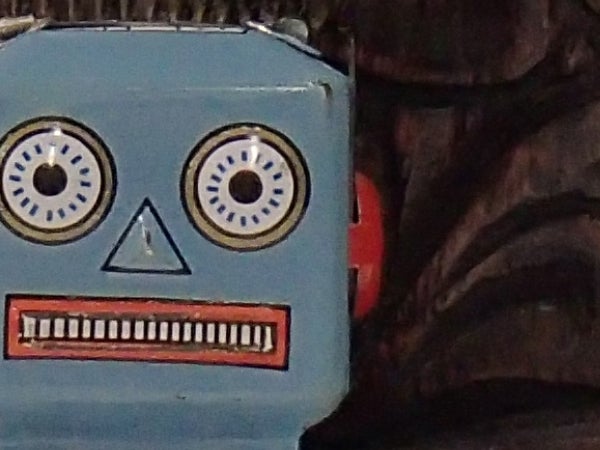 At ISO 400 a hint of noise creeps in, but it’s not to any great detriment of general image quality. 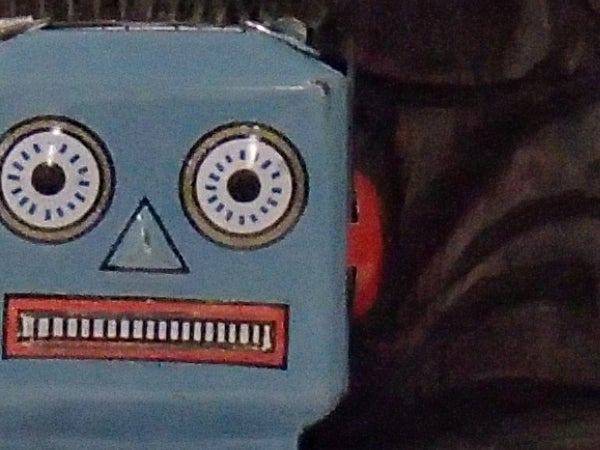 ISO 800 is where noise becomes more visible, even at smaller image sizes. 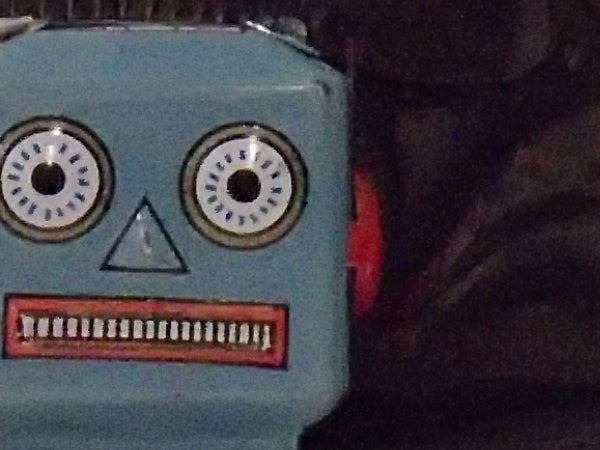 ISO 1600 shows a marked softening and loss of detail as the TG-820’s noise-reduction kicks in. 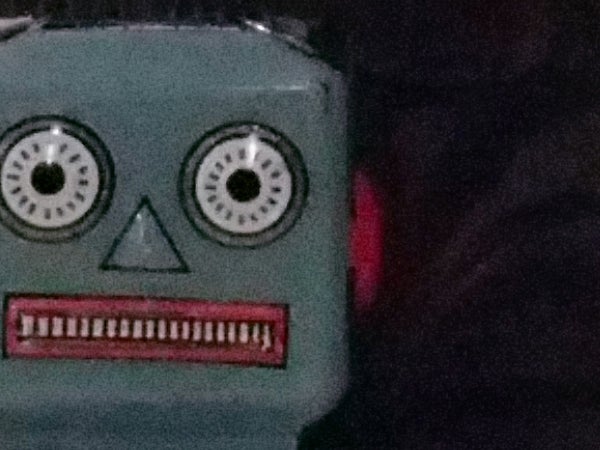 ISO 3200 sees a huge drop in image quality with shadow areas reduced to an indistinguishable blur. 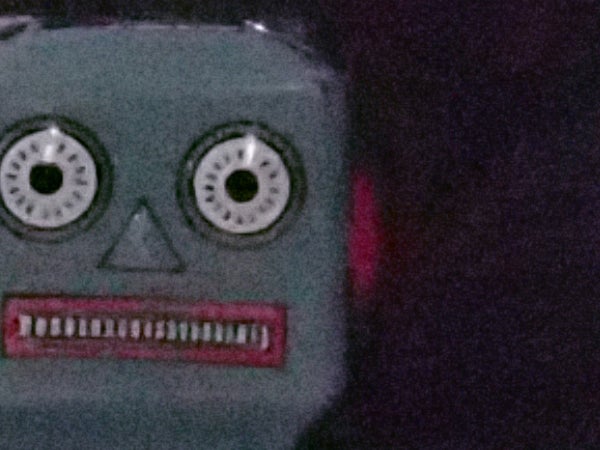 You’ll be able to get an image in very dim light at ISO 6400 but the image quality will be dreadful. 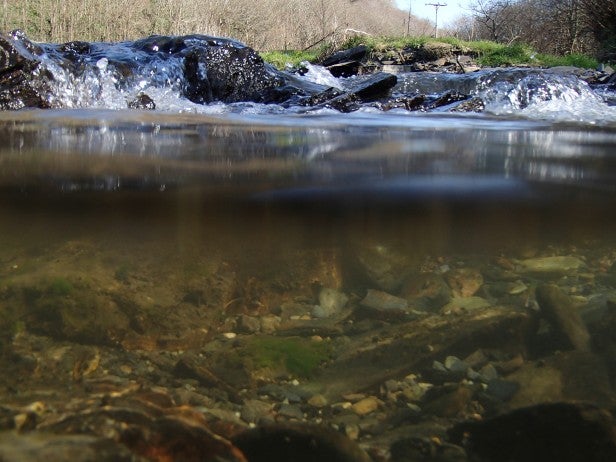 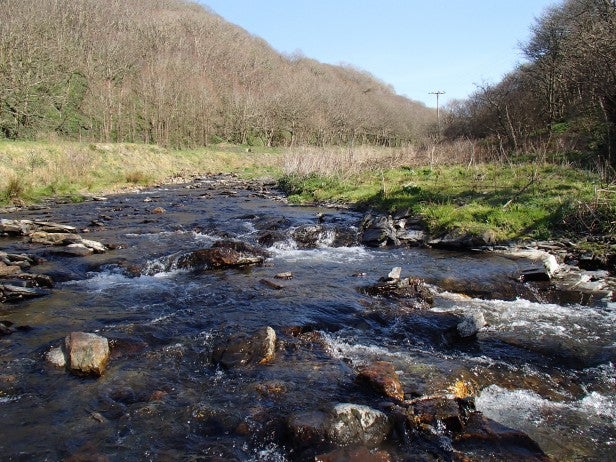 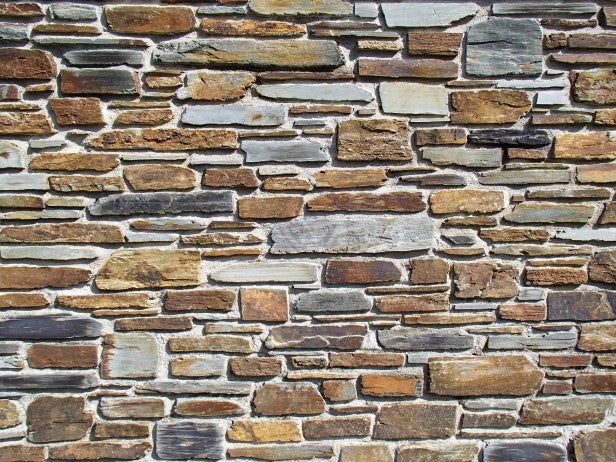 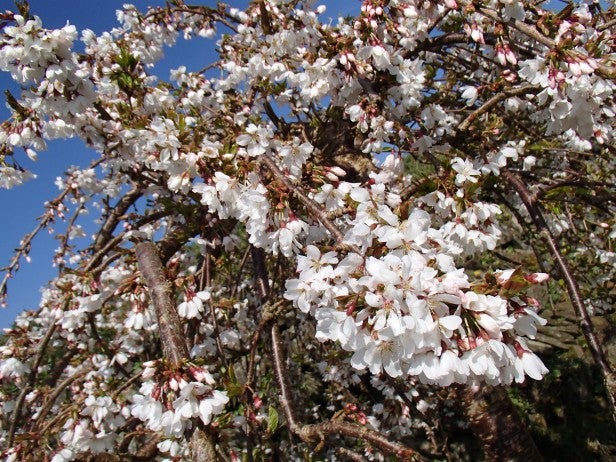 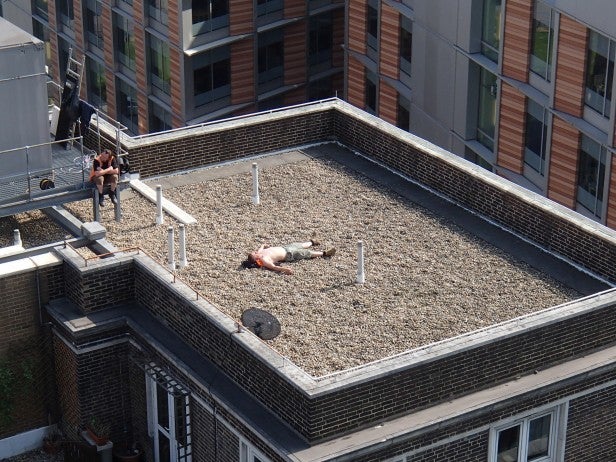 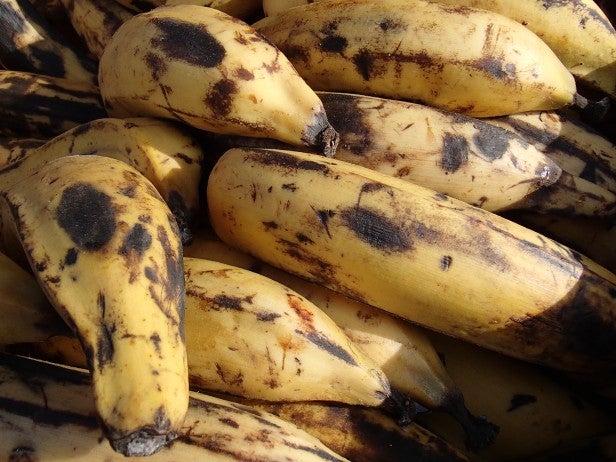 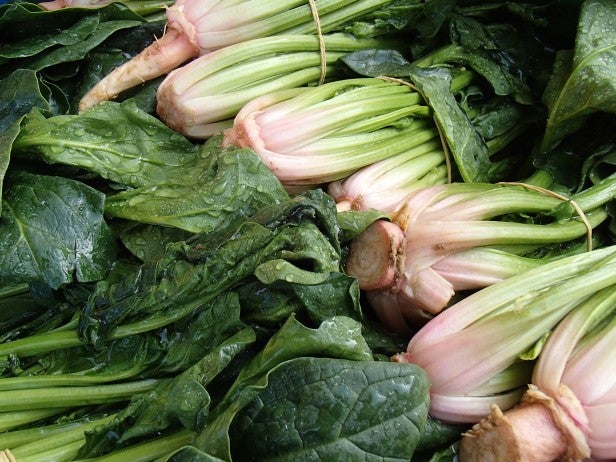 The Panoramic mode allows you to easily create ultra-wideangle shots. 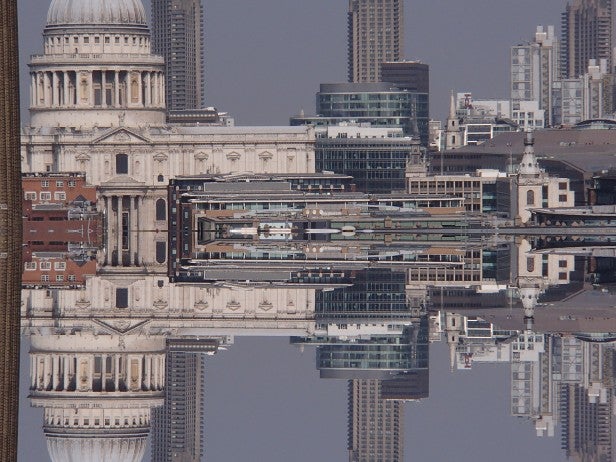 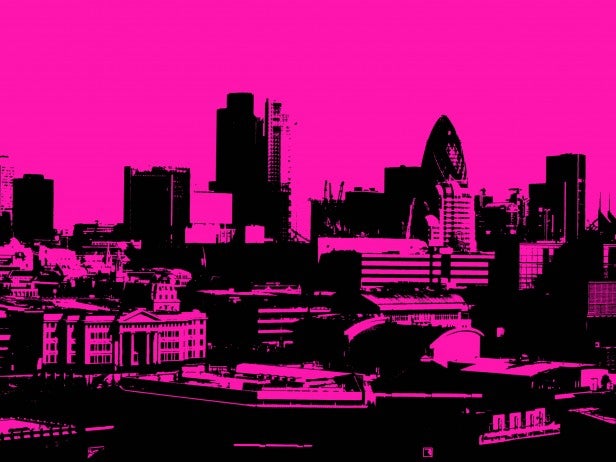