The Canon PowerShot D20 replaces the popular albeit ageing D10 as the ruggedised, waterproof digital camera within the Canon PowerShot range. Due to be released at the end of April, the D20 will launch with a retail price of £349. 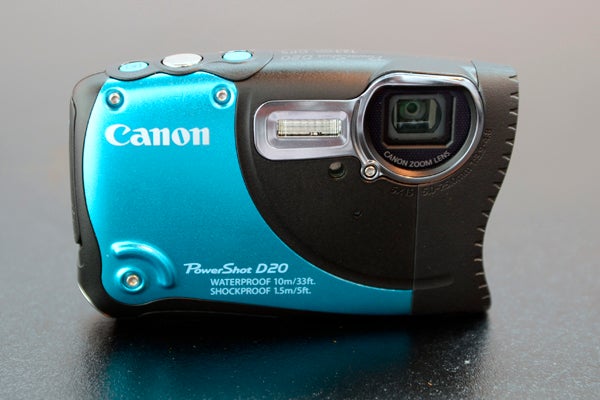 Fully sealed against moisture and dirt, and using a fully-enclosed folded lens design, Canon claims the D20 is waterproof to 10m. Should you want to dive even deeper then an optional WP-DC45 casing is also available, and for around £175 this will increase the D20’s useable depth to 40m.

In addition to waterproofing, the Canon PowerShot D20 has also been shock tested to a height of 1.5m, although Canon does not offer any guarantee against breakage should you actually drop – and break – your brand new D20 from such a height. Last but not least in the ruggedised department is freeze-proofing that enables the D20 to be used in temperatures as low as minus 10˚C.

The more eagle-eyed among you may have noticed that so far, so very D10. However, the ruggedised specifications of the exterior are pretty much where the similarities end. Internally, the D20 is actually quite a different beast to its predecessor and comes with a generous number of hardware and specification upgrades. 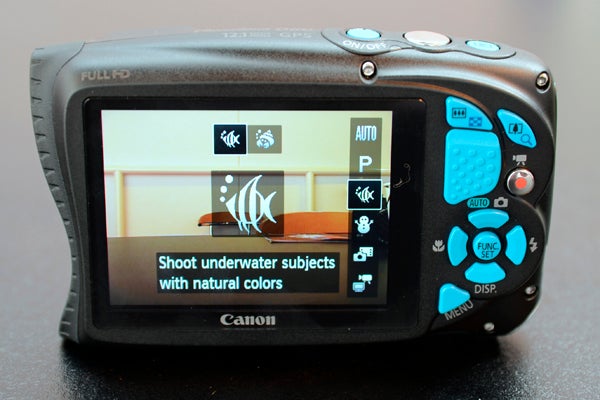 For a start the new model comes with a host of built-in GPS abilities. Not only the ability to tag your photos with the location they were taken, but also to keep a track of your journey via the GPS logger function. Quite how draining all this will be on the battery remains to be seen (from our experience constant use of GPS tends to severely reduce overall battery life), but it’s a useful feature to have on board nonetheless and can, of course, always be switched off should battery preservation be more of a priority.

While overall resolution remains at 12.1MP, the D20 uses a 1/2.3in back-illuminated CMOS sensor rather than the CCD type sported by the D10. The PowerShot D20 retains the same DIGIC 4 image processor found in the D10, but sensitivity is increased by one stop to a maximum setting of ISO 3200. 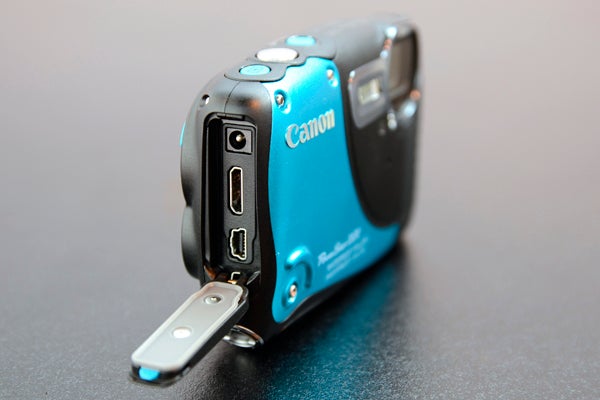 As with all ruggedised cameras the lens is fully enclosed within the camera and protected by a plane of toughened glass. Folded lens designs like this do come with a bit of a reputation for compromising overall image quality, but it’s a necessary trade-off if you want to take your camera underwater without a dedicated housing unit. 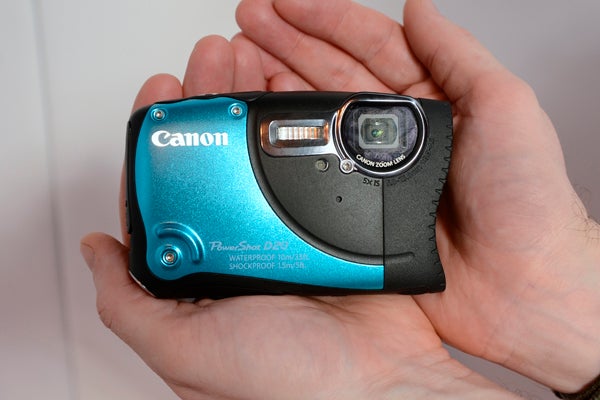 On the back of the D20 you’ll find a 3in, 460k-dot PureColour II LCD monitor, which represents a fairly substantial upgrade over the 2.5in, 230k-dot screen found on the D10. Indeed, the screen on the Canon PowerShot D10 was always one of its weaker attributes, so the increased size and resolution is immediately noticeable and most welcome.

In terms of exposure modes, the Canon PowerShot D20 remains fully automatic in all modes, although a switch on top of the camera can be used to toggle between the snaptastic Smart Auto mode and the more user-adjustable (but still fully automatic) Normal Shooting mode. 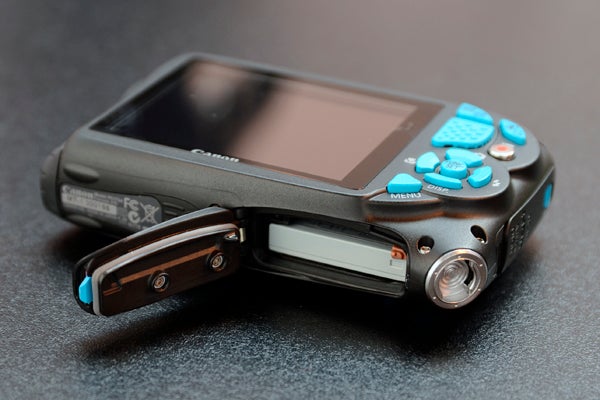 Smart Auto mode is essentially a scene recognition exposure mode whereby the camera judges what’s in front of it before making the appropriate adjustments. The good news here is that the D20 has 32 such scenes programmed into it, whereas the D10 had only 18.

With the camera switched into Normal Shooting mode you’re able to choose between regular Program mode, a small number of individually selectable Scene modes (including direct options for Underwater and Snow) and a generous range of digital filter effects including Fish-eye, Miniaturisation and Toy Camera.

Movie enthusiasts are also well catered-for with the D20 able to shoot at a maximum quality setting of 1080p Full HD at 24fps, supported by 720p HD at 30fps and standard-def VGA movies at 30fps. In addition, there’s also the option to record Super Slow Motion Movies at 120fps or 240fps (albeit at vastly lowered resolutions) which is sure to appeal to snowboarding and surfing tricksters wanting to replay their exploits in slow motion. 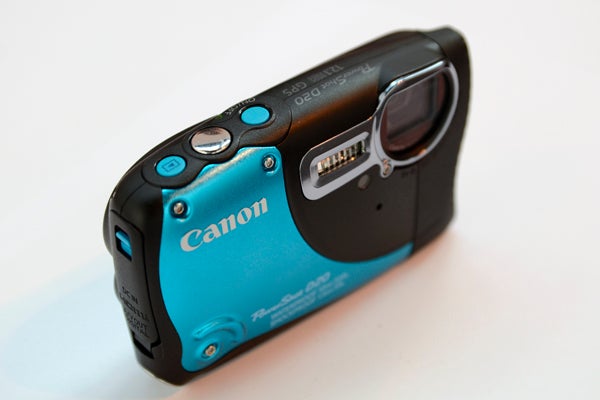 In terms of design the Canon PowerShot D20 is markedly different from the D10. Not only is the flash positioned to the side of the lens rather than above it, the basic soap-bar shape of the D10 has been ditched altogether in favour of something much more asymmetric. It’s still pretty comfortable to hold though, and the larger-than-average buttons on the back should make using it with a pair of gloves – whether they be diving mitts or ski gloves – much easier too.

Indeed, one of the chief requirements of any camera that’s designed to be taken underwater or in an environment where gloves are a necessity is easy operation, and to this effect the D20 looks to have things just about right. The only minor criticism we have at this point is that the Playback and On/Off buttons are positioned quite close to the shutter button, which could cause some problems in thicker gloves.

Adding further to its overall ruggedised appeal, the PowerShot D20 comes supplied with a basic shoulder strap and a more robust Carabiner strap for secure and easy attachment to your person, regardless of your choice of outdoor pursuit. These are supplemented by a non-sinkable neoprene pouch for any potential camera-overboard moments. 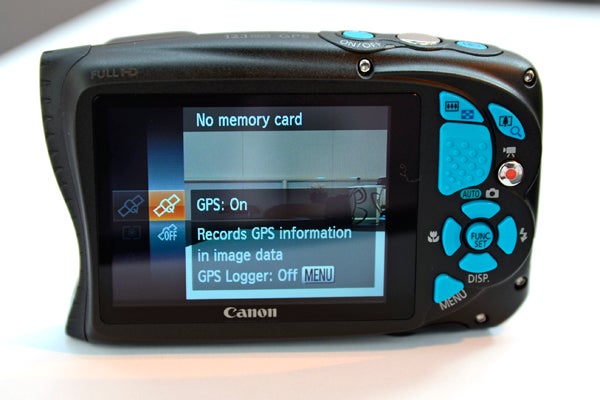 Unfortunately, we’re not in any position as yet to make any comments about general performance or image quality as the D20 sample we managed to get a hands-on with is a pre-production model. Of course, we’ll look forward to putting a full review sample through its paces in due course though.

The Canon PowerShot D20 is a waterproof, shockproof and freeze-proof digital compact camera with built-in GPS. As such the Canon PowerShot D20 will primarily appeal to adventurous and active types looking for a camera that’s as home on the piste as it is underwater. Thanks to well-spaced and relatively large buttons it’s pretty easy to use and despite being fully automatic also offers a pretty good range of shooting options, including Full HD movie recording and Super Slow Motion video capture.