Available on PS4, Xbox One and PC (Review by Ian Dransfield)

First released in 2006 on PS2, ported to the Wii in 2008, and brought into the HD era on PS3 back in 2012, it’s hardly surprising to see Clover Studio’s classic Okami galloping headlong into the 4K era on PS4, Xbox One and PC. And while this number of re-releases might become a mite tiresome, or somewhat diminish the original game’s standing, this certainly isn’t the case here. While it’s lacking much in the way of actual additions for a third release, Okami for the 2017 generation remains – hands-down – one of the best games ever made.

For those who haven’t played Okami, think Ocarina of Time, Wind Waker, Twilight Princess – or any Zelda game of that era – and you’ll be on the right track. Naturally, it’s a very different experience when it comes to the specifics, though: the look, the story, the controls and suchlike. But from a broad, catch-all perspective, it’s a Zelda game starring a wolf…

In real terms it’s an action RPG, where you run around as Amaterasu – the goddess of the sun and (also a wolf). You take on quests, exploring and discovering hidden secrets, bringing colour and life back to the world, and taking full advantage of the bark button. Because there is a bark button.

However, your big gimmick of note is the celestial brush. While a giant paintbrush might not seem all that exciting, it opens Okami to a world of new puzzles to work through, with the power of the brush used liberally. Need some sun shining bright? Paint it in the sky. A bridge? Slosh down that ink. Restore a dead tree to life? Easy with a bit of wristwork. It’s a fun, unique element of the game that adds to the experience and ties in nicely with the watercolour look of everything. 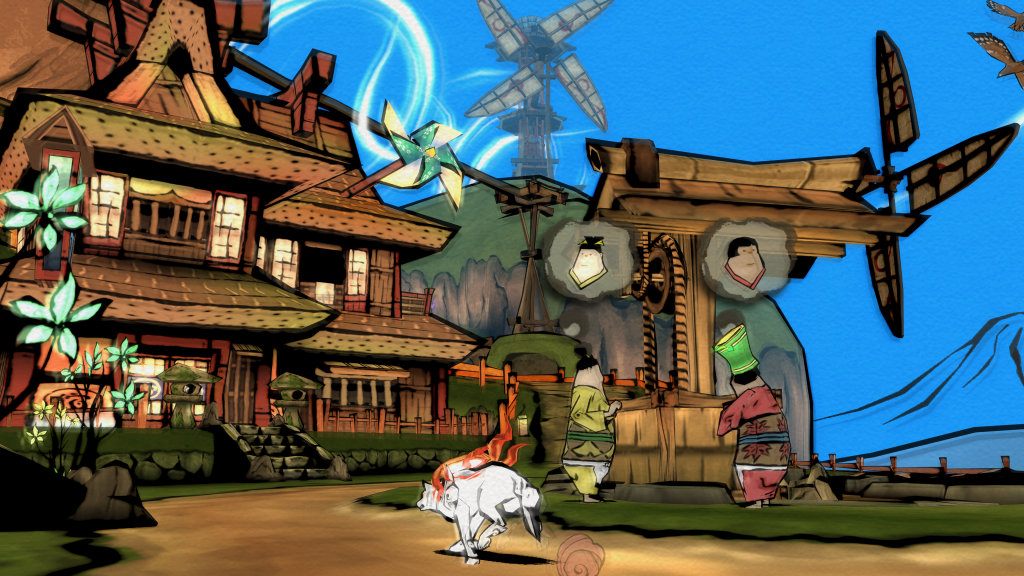 Oh, and you’ll also get into scrapes along the way. For the most part, these are pretty straightforward, but the finishing touch – as it were – comes from the use of the celestial brush. A simple stroke of ink across an about-to-be-vanquished foe brings a flourish of artistic fury to the conclusion of these brawls – and is yet another thing about Okami that’s just ruddy lovely.

Back to the art, though, because even though it’s 11 years old, Okami still looks stunning. Graphics may not maketh the game, but they certainly make an experience transcend its initial boundaries and turn it into something that stands out.

Inspired by Japanese ‘sumi-e’ ink illustration – think watercolours, wood-cut style and cel-shading – the world of Okami is genuinely beautiful and enchanting. The fact it isn’t an entirely po-faced game helps with this, too. While your friend might harp on about the artistic merit of a hillside’s shading, you can bark at a child then steal some turnips. Fun for all!

You may wonder why there’s little mention of what’s new in this third re-release of the game. Well, that’s because there really isn’t much to say. It’s the first time the game has been available on PC and Xbox, which is good news for owners of those devices. Plus, bringing everything into the world of 4K – with a compatible console/display, of course – is fine, but expected. 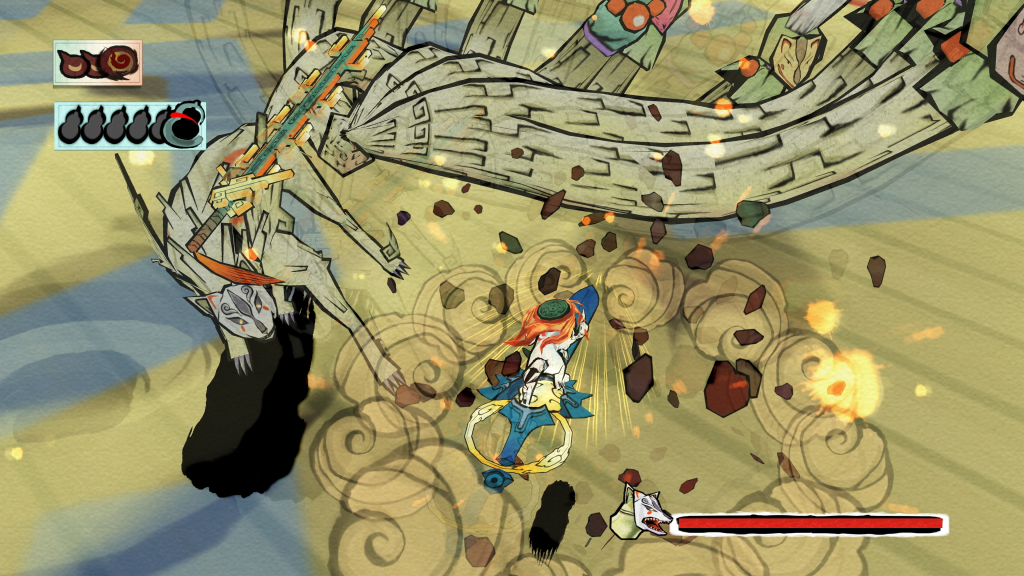 There are some touchpad controls for the brush on PS4, and some filters you can switch on and off to tweak the graphics a little. However, beyond this there’s little we haven’t seen before. Even Capcom’s claims of ‘hey, it’s now in 16:9!’ mean little when the last time Okami was released in HD, back on the PS3, it also featured a 16:9 aspect ratio.

Nevertheless, Okami is a timeless beauty and a rare example of a title from a previous generation that manages to hold up incredibly well. You’ll have to retrain yourself to use save points, rather than relying on autosaves, plus inverting camera controls (so left doesn’t turn right, for example) will be a necessity for those of us spoiled by modern third-person titles.

Minor tweaks and a resolution upgrade wouldn’t be enough for a re-release to be recommended, especially if – as in this case – it was the third such re-release. But Okami manages to sidestep that sort of criticism for two very good reasons. One, it’s a superb game full of wit and imagination; and two, not that many folk have played it.

So please, for the fourth time of asking, can you put down a few quid and pick up one of the best, most beautiful games ever made – you won’t be disappointed.