What is the Oculus Touch?

The Oculus Rift has played second fiddle to the HTC Vive for one crucial reason: you had to play games with a keyboard and mouse or Xbox controller. The use of traditional controllers meant that, no matter how good the VR experience, you could never get immersed the same way you could with the Vive and its cool motion controls.

As a result, many PC gamers justifiably wrote off the Rift last year. This all looks set to change in 2017, however, thanks to the arrival of the stellar Oculus Touch – a set of twin motion controllers that in many ways match, if not beat, the Vive’s immersive VR experience. If you have a Rift already, the Touch really is a no-brainer of a purchase.

Having endured the trial of setting up a Vive, which requires genuine DIY, I was surprised how easy it was to get the Touch working. Out of the box you’ll find left and right Touch controllers, an adapter for Guitar Hero that I’m yet to use, and a second Oculus sensor.

The sensor connects to your rig via a USB 3.0 port, like the main headset’s sensor does. From there all you have to do is power up the Oculus app and put an AA battery in the left and right Touch controllers. The app will launch an automated step-by-step guide, helping you to map out a play area and correctly position the two Oculus sensors.

I found you need to have the two sensors around a metre apart on a flat surface, pointing at the centre of your desired play area. Once done the sensors will scan the room and ask you to map your play area using the Touch controllers. The process is pretty simple and just requires you to walk around the boundary while pressing one of the buttons.

It all took about 10 minutes and the setup worked in a surprisingly limited space. In my tiny London flat I got the Rift and Touch working in a 1.5-metre square, which is considerably less than the Vive, which won’t let you start gaming with room tracking unless you map out a 1.5 x 2-metre rectangle. 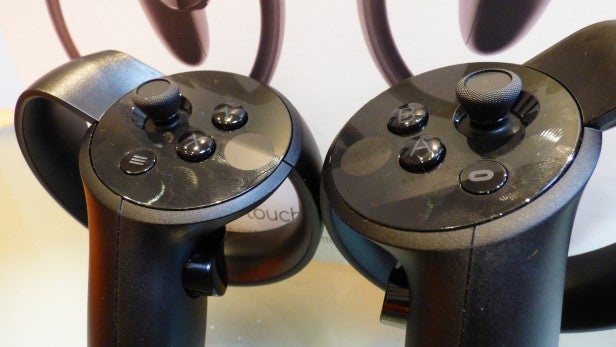 I loved how accurate the Vive controllers were, but I was never completely sold on their ergonomics. The Vive’s wand-like design made them feel a little large and unnecessarily long, kind of like the next evolution of Nintendo’s Wiimotes. That’s why I’m super-pleased to see Oculus take note and design the Touch-motes to be smaller, lighter and more ergonomic than the HTC Vive’s wands.

Functionally these rivals look very similar at first. Both the Touch and the Vive have grip and trigger keys, which act as the primary controls in most games. But the Oculus’s controllers are more intelligently placed. The grip button falls exactly where my ring and middle finger naturally fall. Similarly the trigger button sits right where my index finger instinctively would go if I was, say, holding a gun, which makes shooters great fun.

The small dimensions and intuitive button placement meant I genuinely forgot I was holding a controller during some play sessions.

Playing a round of I Expect You To Die, a game that asks you to solve puzzles using your virtual hands, was a particular treat. Disarming a bomb, I reached out and gripped the controller a little tighter to pick it up, before grabbing a trusty razor with my other hand and slashing the big red wire with one fluid motion. It turned out to be the wrong wire and I died a horrible explosive death, but it was still a blast (pun definitely intended). In similar situations using the HTC Vive I’d occasionally have to fumble to press the button. 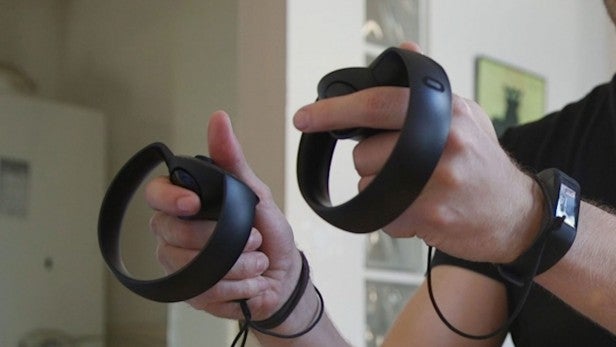 Outside of this the Vive and Oculus controller have very different button layouts. The Vive expects you to interact with menus in the Steam store using a trackpad-style click wheel. The Touch uses a more traditional joystick-and-buttons layout. For pure gaming I found that the Touch’s interface made the controllers a little bit more flexible, as it means you can generally us the controllers to play non-Touch-ready titles. I managed to jump from the Robo Recall demo, which uses Touch, straight into space racer Firma without having to swap to a traditional Xbox controller, for example.

The one issue that’s yet to rear its head is battery life. Each unit is powered by one AA battery and while I’ve clocked up 12 hours of use and not had to replace them, it’s slightly annoying there’s no option to charge over USB. If you want to juice them up, you’ll have to replace the cells.

I’ve also got to tip my hat to Oculus for getting early support for the Touch controllers: It’s set to launch with 53 compatible games. Many titles including VR painter Medium, and multiplayer shooter Dead and Buried also come free of charge.

During my week with the controllers I got to sample around 20 or so of the titles. Initially I was a little concerned about variety. Currently it looks like a lot of developers haven’t figured out how to use the Touch for anything other than first-person shooters, the majority of which are on-rails or fixed-position, horde-mode affairs. Some, such as first-person shooter The Unspoken, manage to mix things up by adding magic teleportation and a PvP focus to the mix, but there’s a definite weighting towards shooters in the launch line-up.

After a software update I did see a number of different, sometimes more interesting, titles pop up. Highlights include real-time-strategy game Cosmic Ray, zombie-themed kitchen sim Dead Hungry, and super-fun spy-themed puzzler, I Expect You To Die. However, in some ways the titles are both a blessing and a curse, as they show off two key gameplay areas in which I don’t think the Touch matches the Vive: collision detection and room scaling. 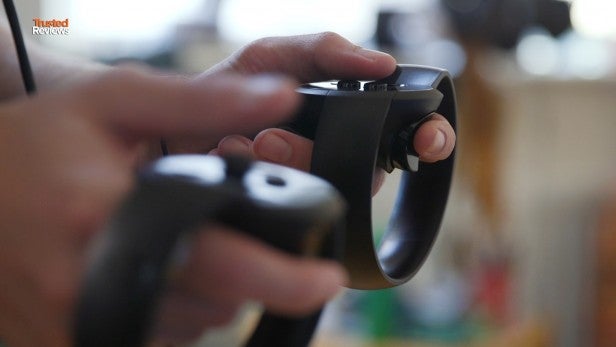 In each of these games you have to solve a puzzle or complete a complex series of fine hand movements in the right order to win. The Touch controls are more than accurate enough for the games to work and be fun – but the Vive’s controllers feel a smidgen more accurate and better at detecting collisions. This is likely due to HTC’s Lighthouse tracking system, which allows for sub-millimetre object detection. Oculus hasn’t released the engineering details about the Touch’s system, but it definitely feels a hair’s breadth behind.

‘Room scale’ experiences are interactive games that don’t tie you to one spot and let you move around a small roamable space. The technique has always been a big focus for HTC and is a key reason why the Vive has more sensors than the Oculus and is significantly more challenging to set up.

Oculus, by comparison, has made no secret of the fact that it’s focused on front-facing VR experiences that don’t need to room scale. As a consequence, a lot of the Touch-ready games I tested were locked-down experiences that tied you to one spot, such as Serious Sam VR, which tasks you to blast wave after wave of enemies from one fixed point. You can turn around, but the lack of a rear sensor for the Touch means tracking can go wrong and the experience isn’t anywhere near as fluid as it is on the Vive. 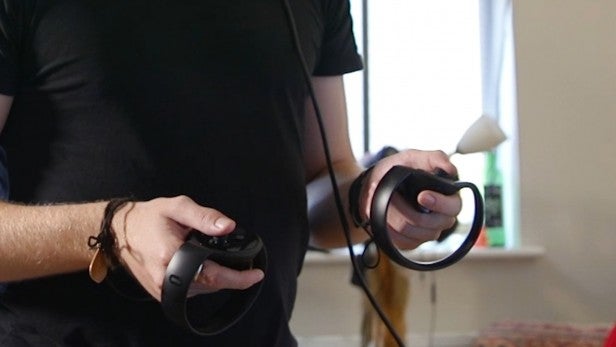 However, some games, such as Supershot VR, partially do room scaling to great effect. The game may be firmly front-facing, but it still encourages you to duck, dodge and dive between bullets in a preset arena like you’re Neo from The Matrix. On multiple occasions I nearly garroted myself on the headset’s cable or ran into a door trying to avoid enemy gunfire.

The only wider issue I have with the Touch is the fact that you’re still tied to the Oculus store. As with many  PC gamers, Steam remains my go-to marketplace.

The Oculus Rift technically works with some SteamVR titles, but I’ve always found the functionality a little hit-and-miss. In the past I’ve experienced crashes, glitches, stalls and all manner of other problems. This remains true with the Touch at the moment. During all my tests SteamVR would recognise the Touch controllers, but the games would respond to them as if they were Vive wands. All too often I’d be missing, or unable to find, the right control for a specific action as a result. Hopefully these issues will be sorted in the near future via a software update, as working SteamVR support would be a massive boon for the Oculus Touch.

I’d also like Oculus to do a bit of work on its own store. The curation system is still undercooked and most titles will set you back as much as £40, despite only offering as little as four hours of gameplay – which, let’s face it, is a rip-off. 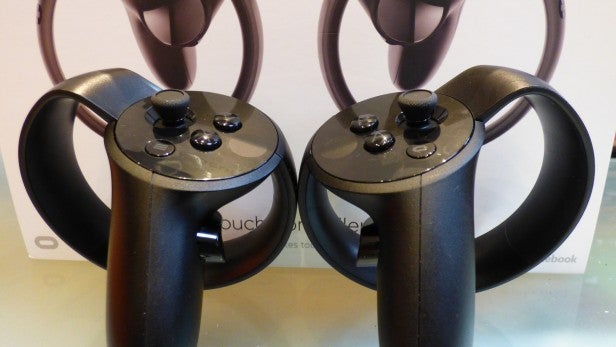 Should I buy an Oculus Touch?

If you already own an Oculus Rift, then yes, you should absolutely buy the Touch. £189/$199 may sound expensive, but it’s a drop in the ocean compared to what you’ve already paid to get a VR-ready PC and headset. Plus it comes bundled with two great launch titles.

The Touch is also the only way you’re going to get a truly immersive VR experience without shelling out for an HTC Vive – which, while great, requires a lot more setup time and space.

However, if you already have a Vive working, the Touch doesn’t do enough different to justify jumping ship. And if you don’t yet have any VR-ready equipment, the PlayStation VR remains the best-value way to get into virtual reality – though it is the least immersive.

If you already have an Oculus, this is a no-brainer purchase.