As it unveiled the Tegra 4 processor during CES 2013, Nvidia made a surprise announcement. It lifted the lid on Nvidia Project Shield, a portable Android games console with an inbuilt screen and an Xbox-like gamepad. It’s not restricted to Android games either. Thanks to Nvidia’s GeForce Experience, it will be able to play full PC games too. Could this be the future of handheld gaming?

The Nvidia Project Shield looks a bit like an Xbox 360 controller with a display jammed on top – and that’s more-or-less what it is. It’s bulkier than any other popular handheld console we could mention, but all that extra room is put to good use. 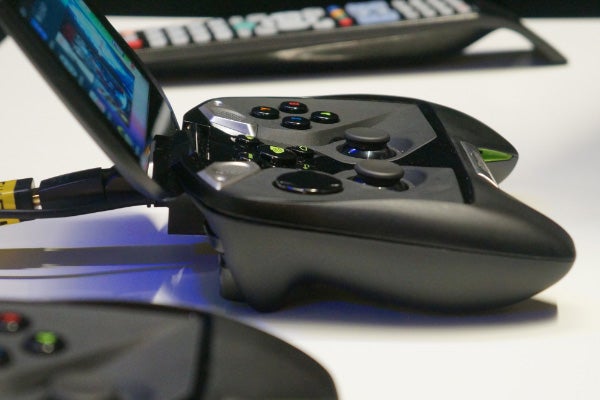 You won’t be able to fit the Nvidia Project Shield in your pocket like an iPhone 5, but the full-size controller helps to give the device a convincing console gamepad feel, allows a large battery to be jammed in and even helps to improve the sound quality of the integrated speakers.

First, let’s step back. Nvidia Project Shield is an Android device, running a vanilla version of Google Android Jelly Bean. There are more odd Android devices like this out there than we can count, but a few elements make Project Shield special. Build quality is mostly excellent, for one, feeling much like an Xbox 360 controller in-hand. The full roster of controls is here – dual analogue sticks, trigger and shoulder buttons, D-pad and the X/B/A/Y quartet. 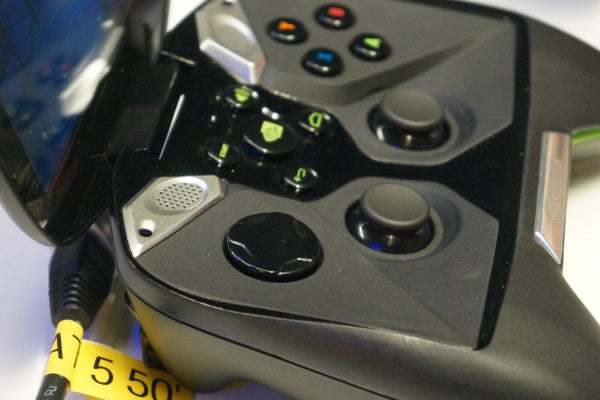 The speakers are ported for extra bass

Nvidia’s relationships are key too. The company is working with Tegra Zone game developers to ensure perfect key mapping of Project Shield’s physical controls in upcoming games. Dedicated dev work isn’t 100 per cent necessary, though, as it has a 5-inch touchscreen as well as gamepad controls. It’s happy to play Angry Birds and co.

Nvidia Project Shield is also the only device that currently supports GeForce Experience. This lets you stream full high-end PC games over a network, with effectively near-zero lag and optimisation for the handheld’s screen. We played Borderland 2 on Project Shield and were extremely impressed with how seamlessly the game played, and how natural it felt on the device, lacking the obvious lag of something like OnLive. Play high-end games on he sofa while others watch Eastenders on the box? Yes please. 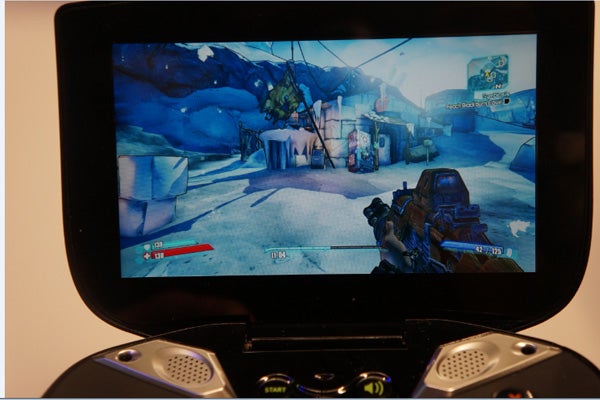 An important element of the Nvidia Project Shield’s hardware is its screen. It’s a high-quality 720p, 5-inch IPS display, making it as pixel-packed as some TVs – if not PC monitors. We asked Nvidia why it hasn’t packed-in a 1080p screen when they’re now becoming common in 5-inch smartphones, but the company dismissed the extra pixels as largely a marketing tool.

Handily, the screen folds over on a hinge to protect the display when not in use. 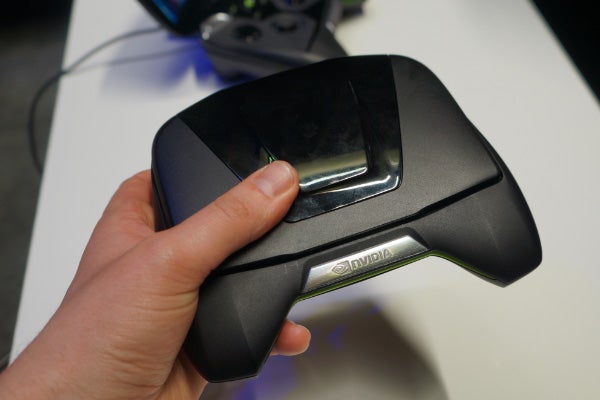 Screen quality of the Nvidia Project Shield is excellent, and while the UI elements of full PC games will likely be a bit small to discern comfortably, game graphics didn’t feel notably compromised by the screen’s specs. However, this game streaming is currently limited to Wi-Fi and Ethernet connections – with no plans to implement 3G or 4G streaming at present (Nvidia joked that 5G or 6G was more like it.)

Nvidia still has a little work to do in optimising the controller’s hardware – the trigger buttons could do with greater contouring and and analogue sticks are a tiny bit loose-feeling – but for a device that could have invited snorts of derision, it’s remarkably viable. Nvidia plans to make these tweaks before launch.

Project Shield doesn’t entirely escape the feeling of being a tech showcase, a proof of concept of sorts, but even Nvidia admits that future improved iterations are likely. We still want this one, mind. 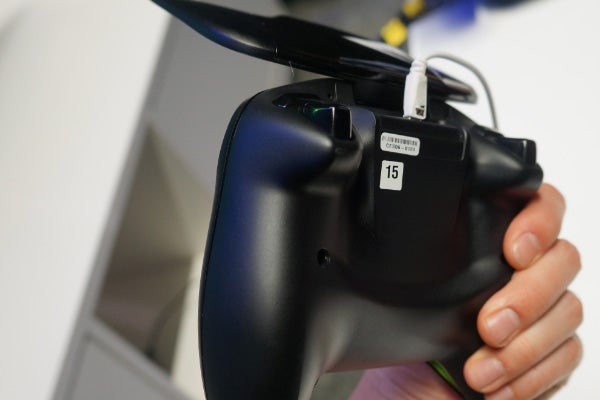 Core to Nvidia Project Shield’s timing is the arrival of the Tegra 4 processor, which offering far more gaming power than the previous Tegra 3 model. It has a 72-core GPU, and enough grunt to make near-direct ports of some PC and console games possible.

We saw Hawken in action, a multiplayer FPS shooter that arguably wouldn’t have been possible with Tegra 3. The game is to be a Project Shield launch title. 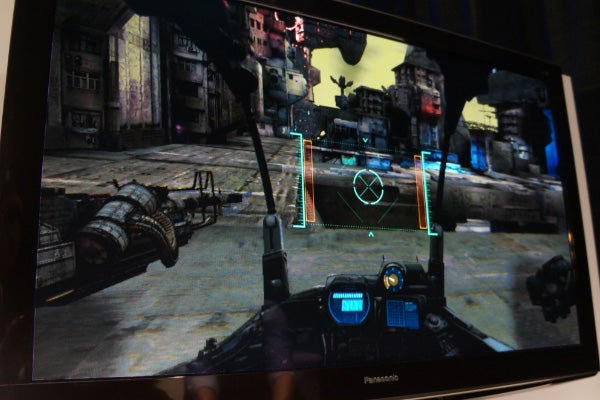 Hawken, piped over to a TV from Project Shield

Other Nvidia Project Shield specs include 32GB internal storage and 2GB of RAM. This is on-par with the latest tablets and smartphones, making the 720p resolution the one spec that isn’t cutting edge. It also features a headphone jack, microSD memory card slot (on the rear) and video output, making it as well-equipped a media player as a gaming device.

Although Nvidia Project Shield was once of the most exciting announcements of CES 2013, there’s something a tiny bit dated-feeling about its design. Its aesthetic flavour owes a debt to gaming laptops and desktop cases, which rarely offer much in the way of real class or sophistication. You can even replace an insert on top of the device with a customised one – pure hardcore gamer fodder. 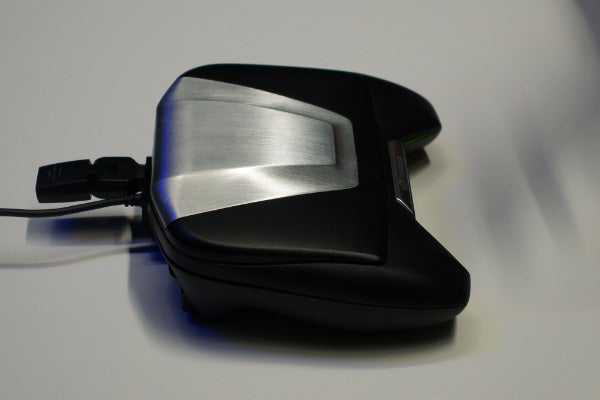 This geeky sheen may attract the hardcore crowd that is an obvious demographic for the device, but it may put off others. However, our initial skepticism melted away upon seeing the device in action – it’s something we want, if not something we’re convinced we’d actually use. But what a glorious dust-gatherer it would make.

Nvidia says that Project Shield will be released in the US in Q2 2013, with launches elsewhere to follow. No pricing details are available, although Nvidia suggested it wouldn’t be a cheap gadget, stressing that its specs were up there with the top Android devices of the moment.

Is this a device that needs a mainsteam audience, or can it thrive among enthusiasts alone? What’s your take?