It was only last week that I wrote at the end of my review of the Nokia N81 8GB that you should keep an eye open for my take on the N95 8GB. Well, if you waited, you may be pleasantly surprised; because I’d say the N95 8GB is a better device.


When I looked at the original N95 I was not overly impressed. Sure it crammed in the features, but I found the handset large, build quality less than stunning, battery life poor, GPS antenna iffy and general software running a bit slow. Hardly a ringing endorsement.


The original N95 has had several firmware upgrades since my review appeared which I understand have dealt with some of the issues. But the good news is that the N95 8GB is an all round better handset from the start. 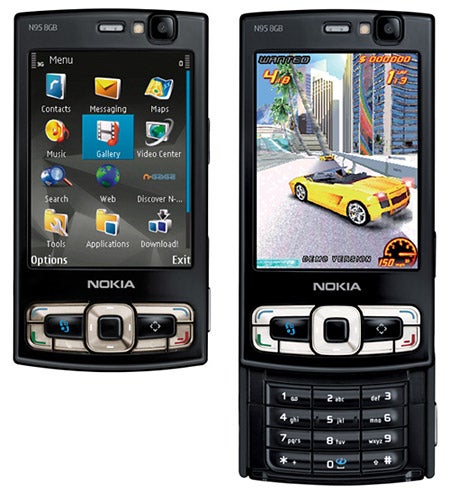 It is still a beast of a mobile weighing you down to the tune of 128g and measuring 53mm wide and 21mm thick. It is 99mm tall and when you open the slider to get at the number pad it grows to a staggering 130mm. In terms of its size and shape, then, this mobile is not for those looking for neatness – in fact it feels like a throwback to the clunky phones of yesteryear. It needs to offer a big payoff for requiring you to carry it.


The ‘dual slider’ concept remains. The number pad slides out of one end, and out of the other, a bank of four buttons for controlling music playback. I wasn’t bowled over by the concept last time round and it doesn’t grab me much this time either, but as before, you can use these buttons to control music playback when you are in applications other than the music player, which could be handy. 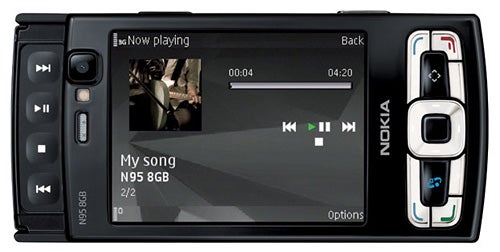 As a quad-band 3G handset with front facing camera for video calling, the N95 8GB is nothing special. Nor does the 5-megapixel Carl Zeiss optics-toting main camera have the ‘wow’ factor it once did as there are plenty of 5-megapixel cameras on phones these days.


But thanks to the huge library of built-in software, 8GB of flash memory (plus another 100MB for messages, ringtones, images, video clips, calendar, to do lists and apps), Wi-Fi and huge screen, the N95 8GB does come the closest I’ve seen yet to Nokia’s aspiration of putting a real computer in your pocket.

The N95 8GB is black rather than silver in colour, but that notwithstanding, it looks a lot like the original N95. There are, though, many subtle differences. These included the loss of a physical shutter to protect the main camera lens, which is now just recessed slightly from the rest of the casing, and the use of a slightly larger screen. 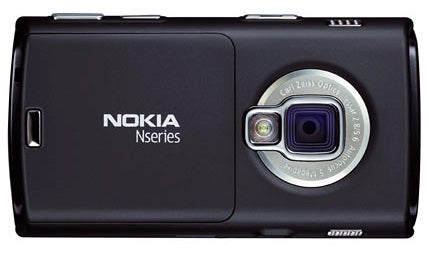 The screen measures 2.8 inches corner-to-corner (it was 2.6 inches in the original N95), and offers 240 x 320 pixels. This puts it on a par with many PDAs, though it leaves them standing with its 16 million colours.


You also get seven application shortcut icons on the main screen – I remember the original N95 offering six.


You may not notice these differences unless you have the two phones side by side, but take my word for it that the N95 8GB looks and feels like a more solid piece of kit – except for the lack of that protective lens shutter. 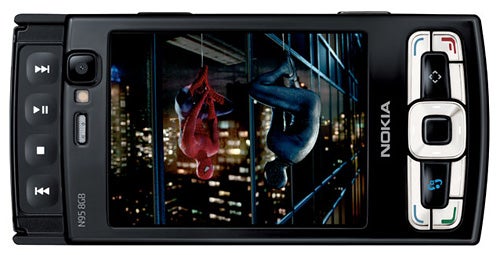 The N95 8GB can play video and Nokia bundles a copy of ”Spiderman 3” on the phone. I can’t say watching a movie on a handset appeals to me at all, but I can say that the rendering was impressive.


The 3.5mm headset jack proved handy for listening to the movie and, even better, the headset jack is two-piece with a second 3.5mm connector past the music controls so I was able to use a decent pair of headphones. 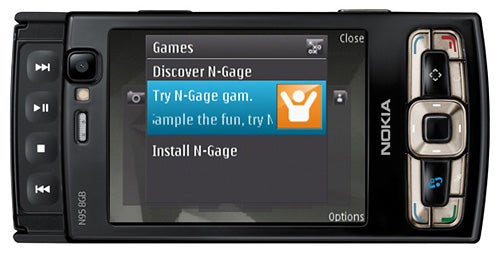 The N95 8GB includes Nokia’s N-Gage gaming platform. This was not live for downloading as I wrote this review, but a couple of sample games gave me a feel for it. The big screen, usable in landscape or portrait format for gaming, does the handset proud here. 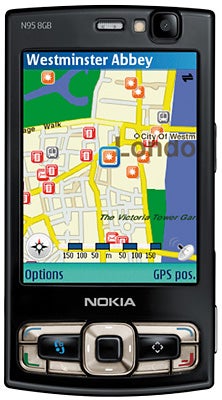 There is also a GPS antenna and with Google Maps built in you can use the antenna to pinpoint your position and plan routes. Turn by turn navigation is a charged for extra. Using the N95 8GB’s Wi-Fi you can download maps direct to the phone if you have access to a wireless network. Wi-Fi and Bluetooth are also bolstered by infra red. I’m always glad to see IR on a mobile just because, old fashioned though it may be, it is still good for file exchange.

The camera isn’t the best I’ve seen on a mobile. Image processing is a bit slow. You have to wait a while after pressing the side-mounted shutter button before your photo is rendered on the screen. This shutter delay really makes capturing images of a moving subject rather tricky. 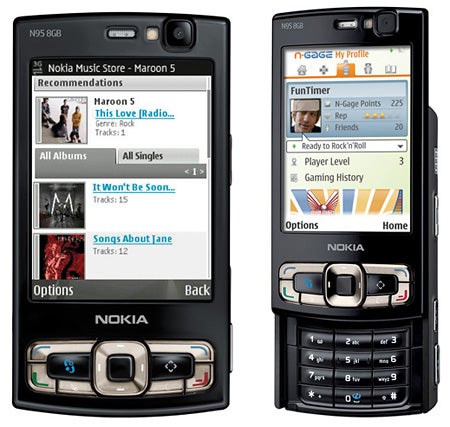 Image quality is OK, though. The coloured dish shot under normal household lighting conditions is good. Its colours reproduce well, and the photo is sharp. The bowl of tiny chillies, freshly harvested from an indoor plant and shot, like the dish, indoors and without the flash, look appetising, and their green and red tones are vibrant.


Testing the macro lens, the ”Sempervivum” photo is good. The individual plants are just a couple of cm across. But get closer than 10cm from the subject and the lens can’t cope. 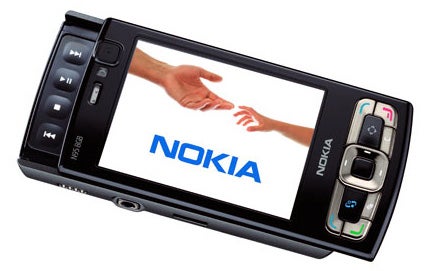 You also get AV out cables with the phone so can send photos, and any video you shoot, to a TV easily. And when it comes to battery life I got eight and a half hours of music playback from a full battery. That’s a lot better than the 5 hours I got from the original N95


If you are vacillating between the N81 8GB and the N95 8GB then I’d probably advise you to go for this one. It is bigger, but I think it is better too. If you own an original N95 and really like the format, then this would be a reasonable upgrade. 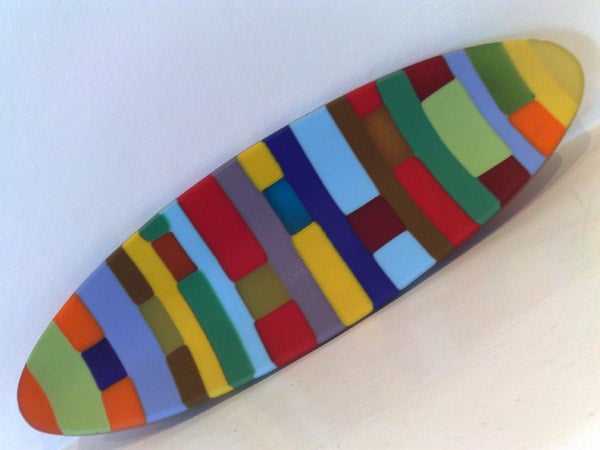 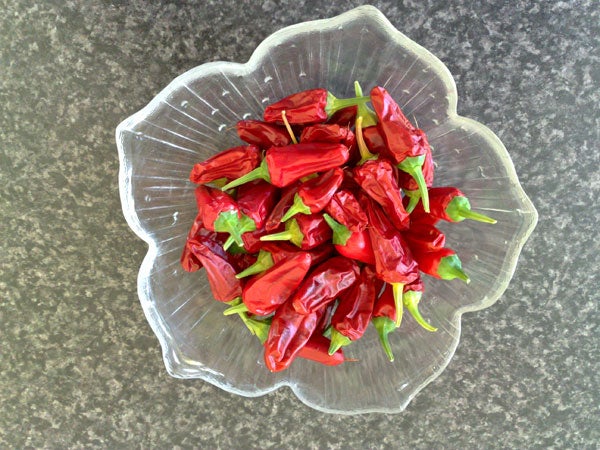 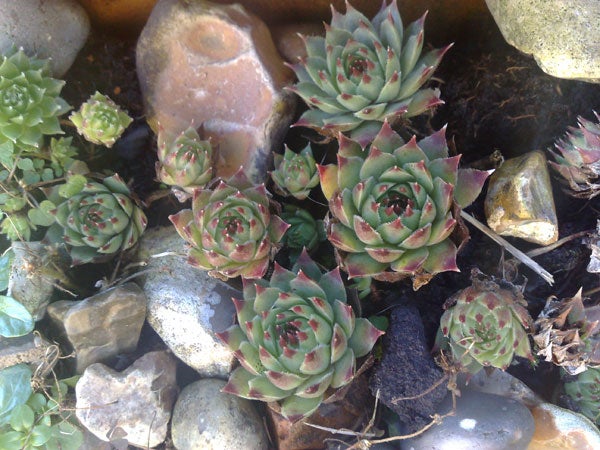