Nokia’s N81 8GB is, not surprisingly given the handset’s name, equipped with 8GB of internal storage memory. This can be used for any data you like, but the penchant of this mobile is for music and games. You might wonder why I am not including photography in the list, but the 2-megapixel camera is one of the aspects of this handset that disappoints. I’ll get to that later, but right now it is worth noting simply that if photos are your thing, there are other mobiles that do a better job. 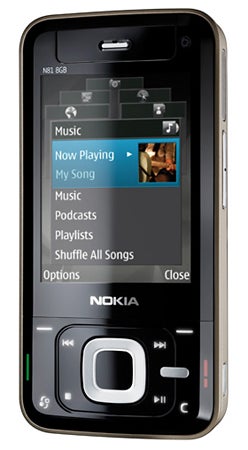 The N81 8GB is a quad-band mobile with 3G. It has a front-facing camera for video calling. It is a chunky beast in the hand and pocket, measuring 102mm tall, 50mm wide and 17.9mm thick. It weighs 140g, which is rather a lot these days for a mobile phone. A portion of the thickness can be explained by the fact that this is a slider. When fully opened the phone grows to nearly 135mm. The good news about the overall size is that the numberpad is large.


Also, while many sliders have a ridge at the bottom of the numperpad area the N81 does not, so it’s easy to get to all the keys and texting at speed is unproblematic. There isn’t a ridge on the outside of the casing either, so pulling and pushing the slide means using the screen section for leverage. You don’t want to drop a thumb onto the button area for this job as you’ll end up activating something or other.

A characteristic of sliders is that their front fascias are relatively button free, but this is not the case here. There are so many buttons, in fact, that the Call and End buttons are squeezed out to the far right and left margins of the under-screen area, right to the extreme edges of the phone.


The silver navigation button takes centre stage. You press it up, down, left and right as usual, but you can also, in a tribute to certain music players we could mention, roll a finger round it to make selections in the media gallery or music application. This feature is turned off by default and frankly I can see why. It is a smart idea but it doesn’t work well because the button isn’t sensitive enough. Then again the button isn’t that good when in non-touch mode. I found it was a bit difficult to press, so that getting around the handset quickly was sometimes frustrating.

To the right of the navigation button, and off centre with the rest of the phone, is the ‘multimedia key’. Press this and you enter a new-look interface where you can access music, games, gallery, the Internet, Nokia Maps and other aspects of this phone. However, you can still get to these via the normal Nokia main menu too.


Add in the Nokia menu button, Cancel and two softkeys and you might think that’s it. But no. More button options are available some of the time, appearing as white backlit buttons on what was previously just the shiny black front fascia casing. For example, turn on the music player and controls appear around the outside of the navigation key making it easy to pause, play and switch between tracks. 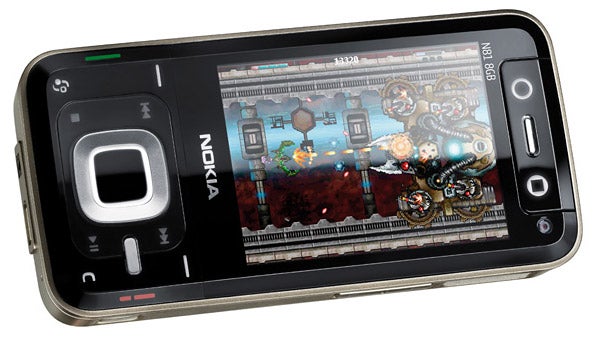 The same goes for gaming (the N81 8GB has Nokia’s N-Gage gaming and downloading service built in). When you play, the screen can function in either tall or wide format. In the latter case you hold the phone like a little games console. In this orientation the softkey and navigation button sit under your left thumb. Meanwhile, two buttons highlighted only when gaming sit under your right thumb.


Now, the download service wasn’t live when I tested the phone, so I could only try the three sample games. Space Impact is a shoot-em-up, Asphalt 3 Street Rules is all about driving and FIFA 07, well, you surely know what that is about.


There is no doubt that the data processing on this handset is fast. And the games show off the superb screen quality really well. At 320 x 240 pixels, 2.4 inches corner-to-corner and capable of 16.7 million colours it is a delight. I’m not so sure it’s worth buying the N81 8GB just for its gaming potential though, because the N-Gage platform is an unknown quantity. 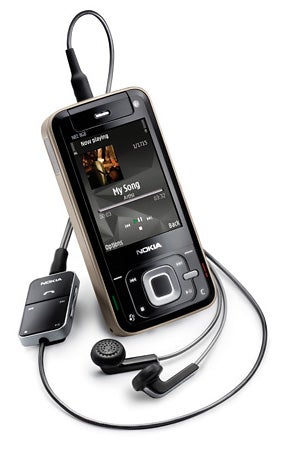 Music playback is probably the best thing about this phone, and Nokia has got a lot of things right. Stereo speakers on the handset deliver loud music to a fairly good quality, though a bit short on bass tones. Nokia’s Podcast application is built in as well as an FM radio to supplement music.


The headset is two-piece, with a 3.5mm connector past the playback control unit. The connection to the handset itself is 3.5mm too. And Nokia has managed to locate it on the top of the phone – by far the most ergonomic position for a headset jack.


As for battery life, I got nine and three quarter hours of continuous music playback from a full charge, which is pretty good going.

Wi-Fi is built into this handset as well as Bluetooth, and Nokia’s relatively new Wi-Fi scanning system is here. This can be shown on the main screen and from there only a couple of key presses are needed to scan for and hop onto a network.


For all its 8GB of memory I’d have actually liked a flash memory card slot too. Call me greedy if you like, but flash memory is a great way of getting data on and off a phone when you don’t want to make a PC connection. True, you can use the mini USB connector for drag and drop file transfer if you aren’t a fan of Nokia’s PC Suite, but that still means making a physical connection between PC and handset. 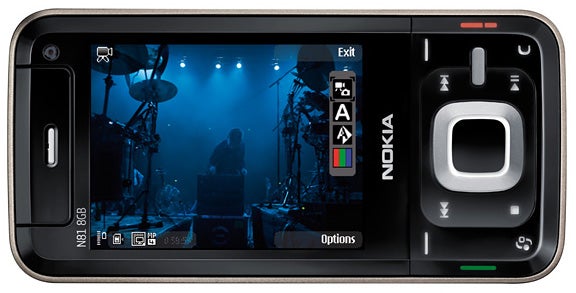 Finally I come to the camera. As is standard these days the screen shifts into wide format when you want to take photos or shoot video, and a side button does the deed. The 2-megapixel camera with its lack of autofocus and macro modes sounds low-end on paper, and in practice proved a real let down.


The coloured dish, shot indoors under normal household lighting, is grainy and dull. Outdoors, the yellow flowers were shot quite close up and colour reproduction is OK, but you can see that the camera doesn’t cope well at close quarters. 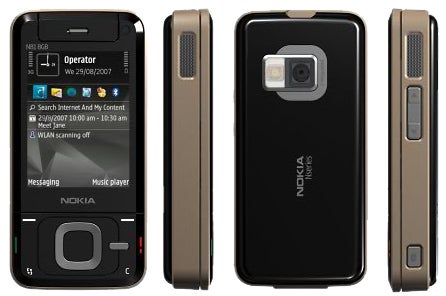 The other photo, a massive home-grown beetroot waiting to be plucked from the ground, is also grainy, and there is something terribly wrong with the exposure, which was set on auto for all the photos. It is almost as though I shot the photos with the protective plastic cover still on the lens. I didn’t.


Nokia’s N81 8GB ought to be a superb phone. On paper, the specs are enticing apart from the camera, which really did disappoint. It’s also a rather chunky mobile phone and the navigation pad can be annoying to use. If you have an eye on this handset, hold out till you’ve read my review of the N95 8GB, coming up very soon. 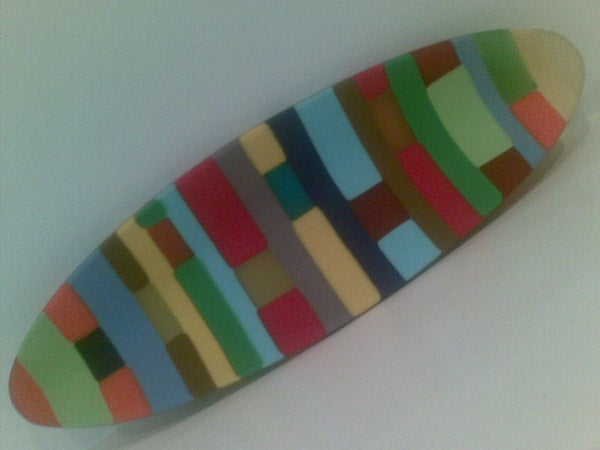 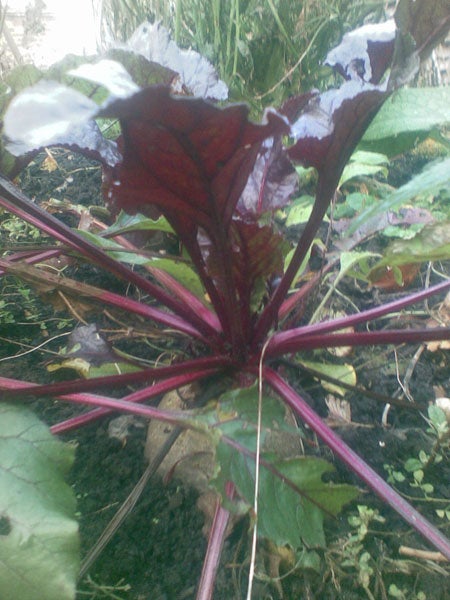 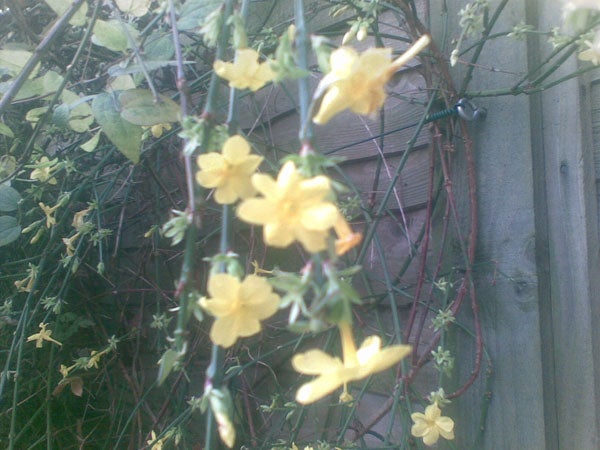