Nokia’s step away from Symbian and relaunch with the Lumia 800 running Windows Phone didn’t impress us quite as much as we were expecting. But one feature of the new handset was a particularly welcome return to form – the rebirth of the previously award-winning Ovi Maps as Nokia Drive. Its predecessor was so good, we felt Nokia Drive deserved its own individual review.

Ovi Maps particularly impressed us with its map coverage, and its ability to download maps to local storage. So you could still use your phone as a sat-nav even when out of data coverage, and you could avoid pricey data roaming. The Ovi Maps service started off being a premium add-on, but Nokia then began giving it away for free. This ethos has carried forward to Nokia Drive, but otherwise the app is a completely fresh piece of software designed to fit in with the interface conventions of Windows Phone. An equally important shift is also that, where Ovi Maps was tied to a desktop app for downloading of maps to local storage – something we found could be a bit fiddly – Nokia Drive does everything within the handset.

You simply go into the Manage maps section in the settings, and choose which maps you want to download. Unsurprisingly, this is best performed where you have a WiFi connection, as the data requirements can be huge for countries with extensive road networks. The choices are vast, too, and cover most of the globe. The Europe section doesn’t just consist of the main Western European countries, but Eastern Europe including Russia. The America section includes a lot of South America and the Caribbean, although not Cuba, as well as Canada and the USA. The Australia / Oceania section incorporates New Zealand, and Asia has a fair portion of the Middle East, although not Israel. Finally, most of the major countries in Africa are available, although quite a few smaller ones are absent, such as Mali, Liberia, or Ivory Coast. Ethiopia and Eritrea are missing, too. 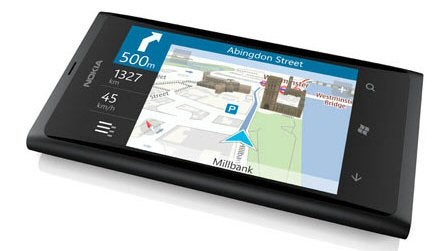 This sounds like an idyllic situation, but it does have one drawback to
do with the Lumia 800 itself. The phone comes with 16GB of local storage
and no MicroSD slot for upgrade. So you won’t be able to fit all the
maps on at once, particularly if you’ve got a healthy music and movie
collection on board as well. So some judicial pruning may be required
from time to time. It’s possible to download only portions of countries,
which is handy if you find yourself forced to grab a map whilst data
roaming, and of course you don’t have to download maps at all, as the
portions you need will be pulled down as required dynamically, if you
navigate to a location for which you haven’t obtained a map yet. You
will also need to download a voice for the verbal commands, although
this doesn’t take up a lot of space, and only needs to be done once per
voice.

Aside from the hugely impressive map coverage, however, Nokia Drive is a fairly limited sat-nav app, but it is quite pleasant to use. Central to this positive experience is the way you search for a destination. The address, postcode and points of interest database are all rolled into one, which you can search by keyword. Suggestions pop up as you type. This is a very quick and simple way to find a destination, and Nokia’s implementation is arguably even slicker than that provided by Mio and Navman’s Spirit interface. But it does have a couple of drawbacks. 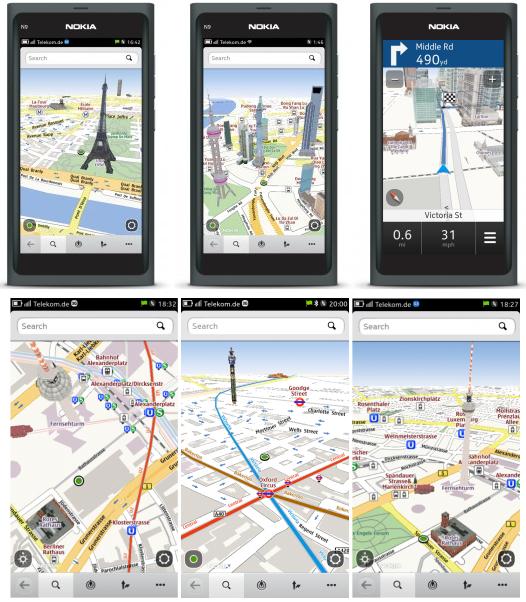 The biggest of these is that, whilst the maps can be kept locally, you can’t search for a destination without a data connection. Once your route has been set up, no data connection will be required, and the data roaming charges will be considerably less than downloading a whole map. But this is still annoying if you don’t intend to turn on data roaming at all when abroad, or find yourself in an area with no mobile data service. It’s also not possible to navigate to a specific house number, although full UK postcodes are supported. Your last search terms are kept in a list, ready for reuse, but you can’t store favourites or a home location, either. So you can’t get round the data connectivity requirement that way either, and there’s no multi-waypoint journey planner available. 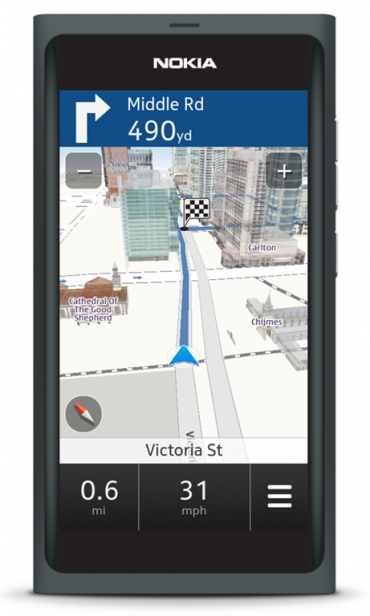 The map view is fairly clear, although it doesn’t pack the screen with
information. When navigating, you get a readout of the distance left to
your destination and your current speed, plus the distance and direction
of your next turning, and that’s it. There’s no estimation of how much
time remains in your journey at all. You can choose between 2D or 3D
modes, and there are 3D models shown of key landmarks, which Ovi Maps
had already, although you can turn this feature off if you want. Extra
features only go so far as the option to switch between day and night
colour modes for the onscreen map. No live traffic updates are
available, unlike {linkout:
https://www.trustedreviews.com/news/Google-Maps-Navigation-Helps-You-Avoid-Traffic
Google Maps Navigation}.

Verdict
Despite
its comprehensive map coverage, Nokia Drive doesn’t have the features
to replace a discrete sat-nav device, or even a premium sat-nav app
running on another phone platform, such as
TomTom for iPhone or
ALK CoPilot. In particular, the lack of traffic updates will make it
less than preferable for regular commuters hoping to avoid the jams on
their way to and from work. But it’s fine for the occasional journey, or
holiday use, and the keyword search system makes it extremely easy to
operate, and it’s a little slicker than
Google Maps Navigation, although the latter has a few more features,
including traffic updates. Still, as a free inclusion for Nokia Lumia
800 users, Nokia Drive is impressive, and you may well find yourself not
bothering with a separate device.