The main selling point of this mobile is its music and video capability and that is where the swivelling comes into play. The number pad section twists through 180 degrees allowing you to have either the 1 to 9 keys or a set of music and video control buttons facing front. With the number pad facing front the 5700 XpressMusic seems fairly unremarkable. The handset sports an ordinary looking S60 home screen, with Active Standby applications waiting for you to select them. 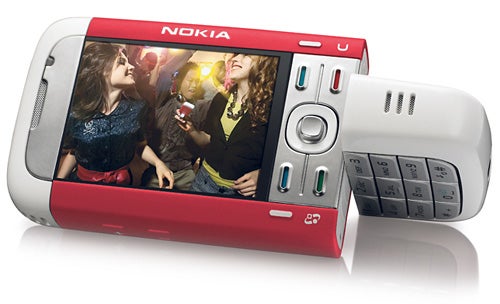 You can digit-dial calls as you would on any other phone. There are two softkey buttons, Call and End buttons and in their centre a miniature joystick for moving about. I never find mini joysticks to be entirely comfortable to use, but this implementation is a perfectly acceptable example of its type.


The phone comes in two main colour schemes (although a khaki green version is mentioned too). In each case there is a fair amount of white plastic involved, with a band of colour flashing alongside the screen on the front of the casing and forming much of the back cover. This band houses two further buttons towards the phone’s outer edges. On the left is the Nokia menu key, on the right the Clear key.


Everything except the number pad remains facing front when you do the twisty thing and bring to the front a pad containing two enormous forward and back buttons and a central play/pause button. Do this and the S60 music player automatically runs and you can choose a playlist, song, artist, album, genre or composer. 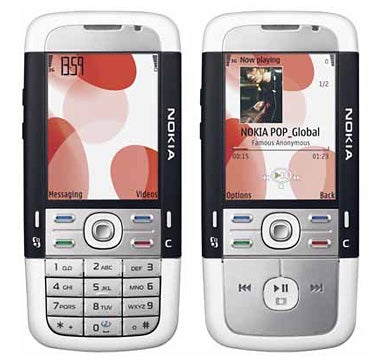 The pause/play button has a camera icon emblazoned on it, and this is what you use to snap photos or shoot movies. In this mode the forward and back buttons activate the camera zoom. The camera software automatically runs when you swivel the keypad section through 90 degrees.


This swivel section also houses the lens and flash for the built-in 2 megapixel camera on one of its sides. You can face the lens either towards you or away from you, the camera software inverting the image on the fly so that it is the right way up on the phone’s 2.2 inch, 320 x 240 pixel, 16 million colour screen.

All this might sound like a bit of a gimmick, but in fact I found it fairly comfortable to get on with in most cases. It is a lot easier to use than the multi-twisting Nokia N93 was. Some aspects of using the camera are problematic though – I’ll get to that shortly. 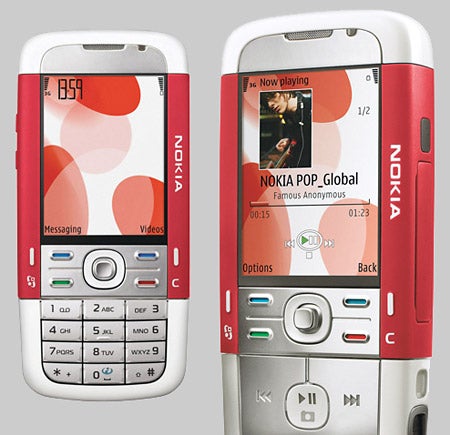 This phone’s 115g are no bother to carry around, though it is a bit large for the pocket at 108mm tall, 50.5mm wide and 17.3mm thick. The 128MB of internal memory is not particularly generous, but a 1GB microSD card is supplied to boost this. It lives in a housing behind a rubber cover on the right edge of the phone. This is also where the tiny mains adaptor jack fits in, and where the mini USB cable for PC connectivity plugs in. Yes you get a cable, and you also get PC Suite for PC data sharing.


Music output quality is thankfully good. The handset has stereo on-board speakers. One is fixed on the top left edge, the other is on the bottom edge and its outward direction depends on how you have swivelled the number pad section. They produce enough output to annoy commuters and provide fairly comfortable desktop listening. 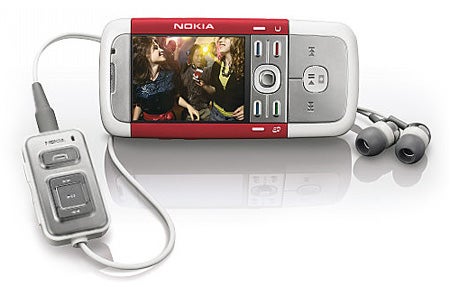 Nokia bundles its HS-44, AD-44 two piece headset. The phone connector is a 2.5mm jack, and terminates in a chunky inline controller for music playback. Out of the controller comes a 3.5mm jack which you can use to attach the provided in-ear buds or your own headphones. This two-piece arrangement means you can use the built-in FM radio with your own earphones, as the antenna is in the phone-connecting part of the HS-44, AD-44 combi.


Battery life is the other important component of a music playing mobile and my own battery rundown test, asking the phone to play music non stop from a full charge resulted in just a few minutes over nine hours of solid music, which is right up there with the best performing S60 handsets I have tested.

The camera, on the other hand, is a bit of a mixed bag. It doubles for making video calls. With its lens swivelled towards you the two sections of the phone form a makeshift stand, and the handset can sit happily on a table in front of you at the right angle to capture your ugly mug. Using it in this way is quite comfortable. 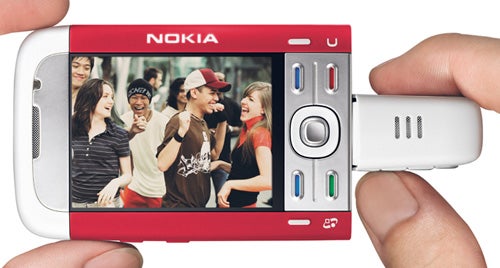 Meanwhile for photography if all you want to do is hit the button and capture an image you are on easy street. But making settings via the soft menus is fiddly because the number pad section necessarily sits at right angles to the soft menu buttons and joystick. Hitting the buttons is OK, but pushing the joystick to, for example, change the image resolution, control the flash, use the self timer or select panorama mode is a little awkward.


It is also difficult to use the camera one-handed. Activating it via the swivel really requires both hands and thereafter balancing the phone in one hand to take a shot can be tricky. You can use the camera with the phone in ‘flat’ mode, but you must either activate it through the Nokia menus or assign a softkey to it as there is no dedicated on/off controller for it.

Image quality is variable but generally not too hot. The coloured dish, photographed under normal household lighting is dark and grainy. Outdoor photos were sometimes acceptable such as the apples, sometimes not. The passion flower is dreadfully over exposed while the surrounding foliage gets better treatment. The usual additional range of S60 applications is here, including email, calendar, calculator, converter and Web browser.


The 5700 MusicXpress is a nice phone for music fans, a less nice one for photographers, and the bottom line is that other handsets are better at both things. 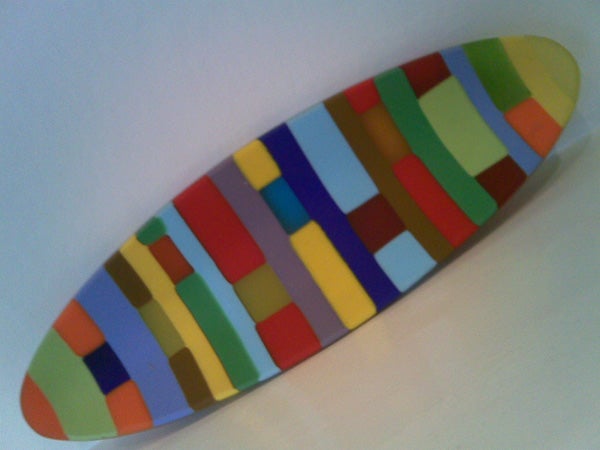 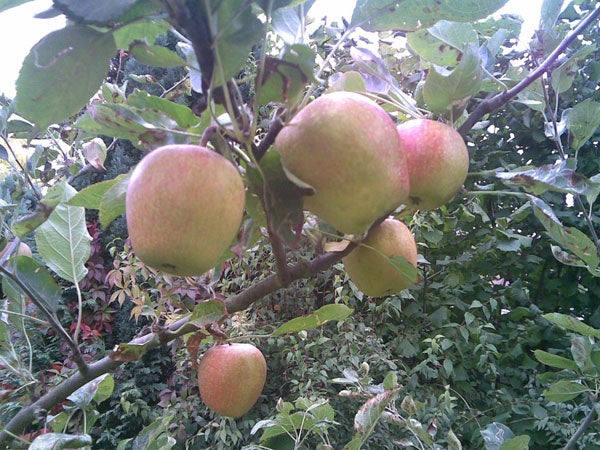